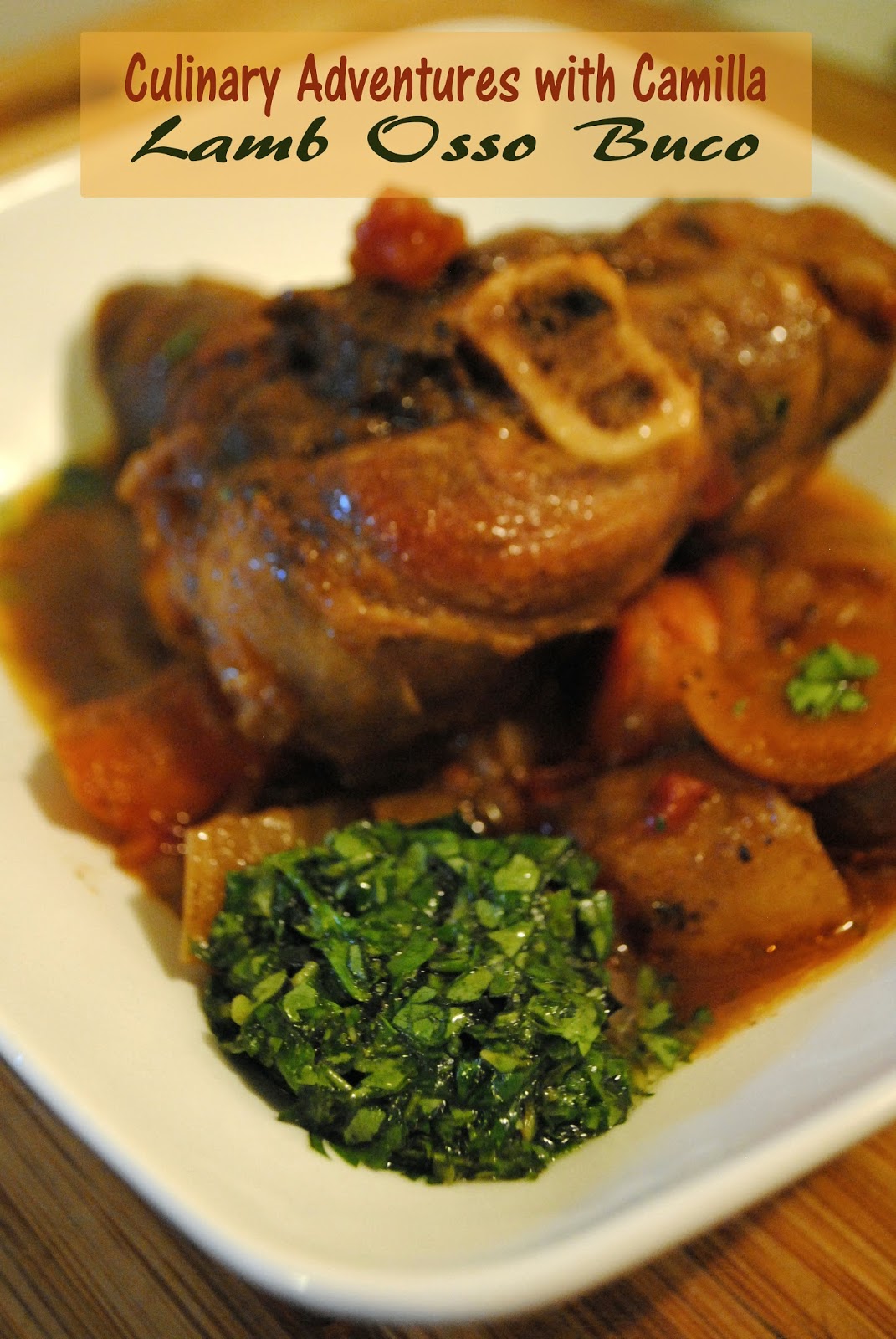 I think the busier my life gets, the more I lose myself in books during every spare, unscheduled moment. I juggle multiple books all year long; it just gets worse during summer vacation. This is one that I took on my son's birthday camping trip a couple of years ago. And while the kids were at the archery range, I sat by the fire and read the afternoon away. I, apparently, never hit 'publish' on this post. Fixing that now... 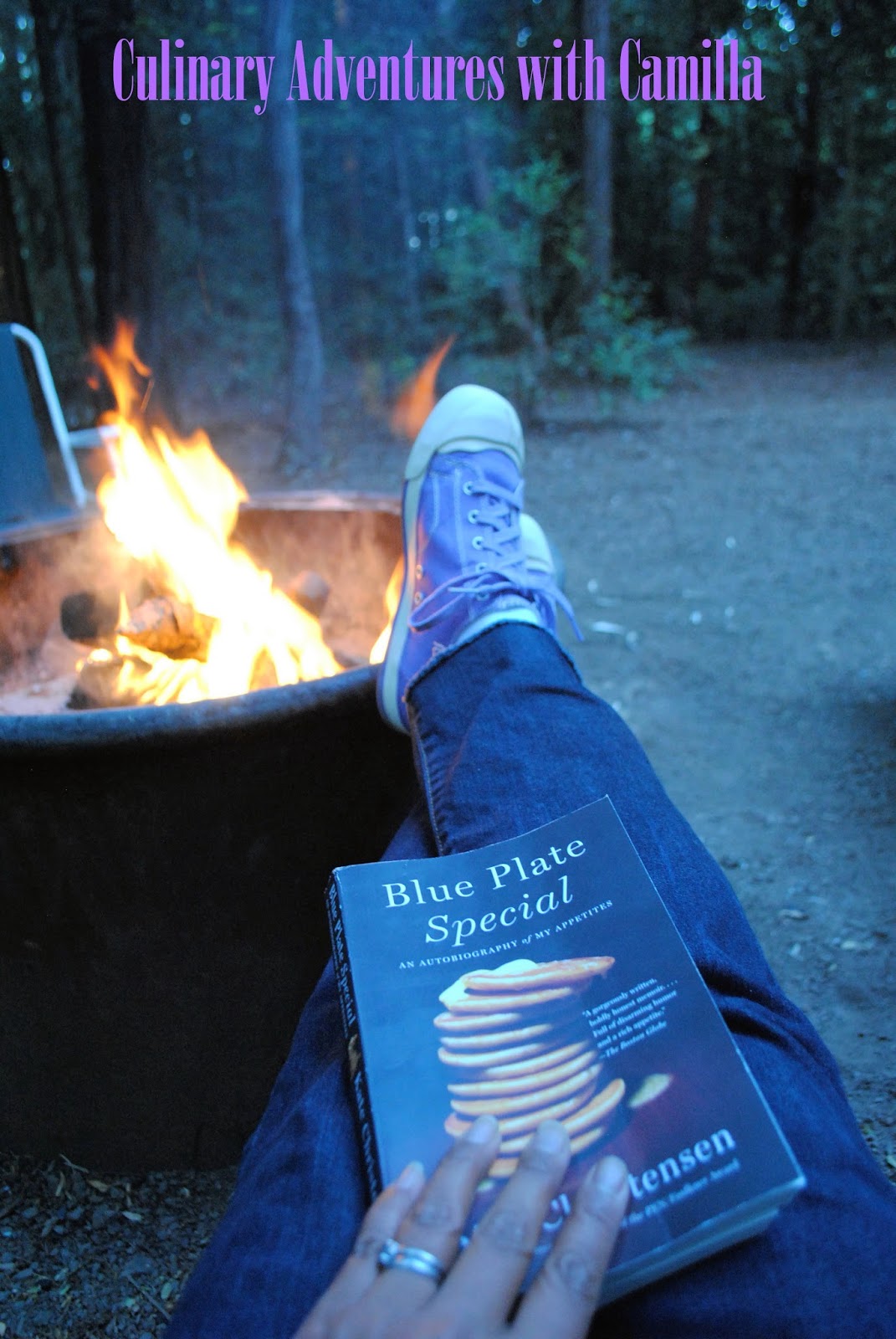 Blue Plate Special: An Autobiography of My Appetites by Kate Christensen* is an atypical food memoir. It doesn't chronicle a trip around the world in pursuit of the perfect plate of something; it's not about a year-long cooking project, with a well-defined start, middle, and end. It's, as its subtitle, a story of her life informed by her relationship with food.

First, there are the soft-boiled egg and pieces of buttered toast strips she’s eating in Berkeley when she witnesses her father brutally beating her mother. Then there’s the sublime, velvety zucchini she eats in the apartment above the kitchen at Château de La Mhotte where she is working as an au pair. She writes: "That zucchini woke me up to the idea that food had possibilities and qualities that I had not suspected. I began to pay closer attention to what I ate...as something to savor when it was good...."

Her boyfriend, then husband, taught her how to enjoy food without guilt, remorse, or puritanism. As she feasted on steak frites, artichokes, poached eggs, steak tartare, oysters, beef bourguignon, blini and caviar...all washed down with rustic red wine, she fell in love with Jon. Later, after her divorce, she discovers she's gluten-intolerant when "it took about twenty-four hours to return to normal after one crumb of gluten." She avoids malt, barley, rye, oats, spelt, couscous, bulgur, and sprouted wheat; she steers clear of any food fried in oil used to fry wheat-containing food.


All of her memories center around food in some way. Food opened up the memory around it. Food memories. 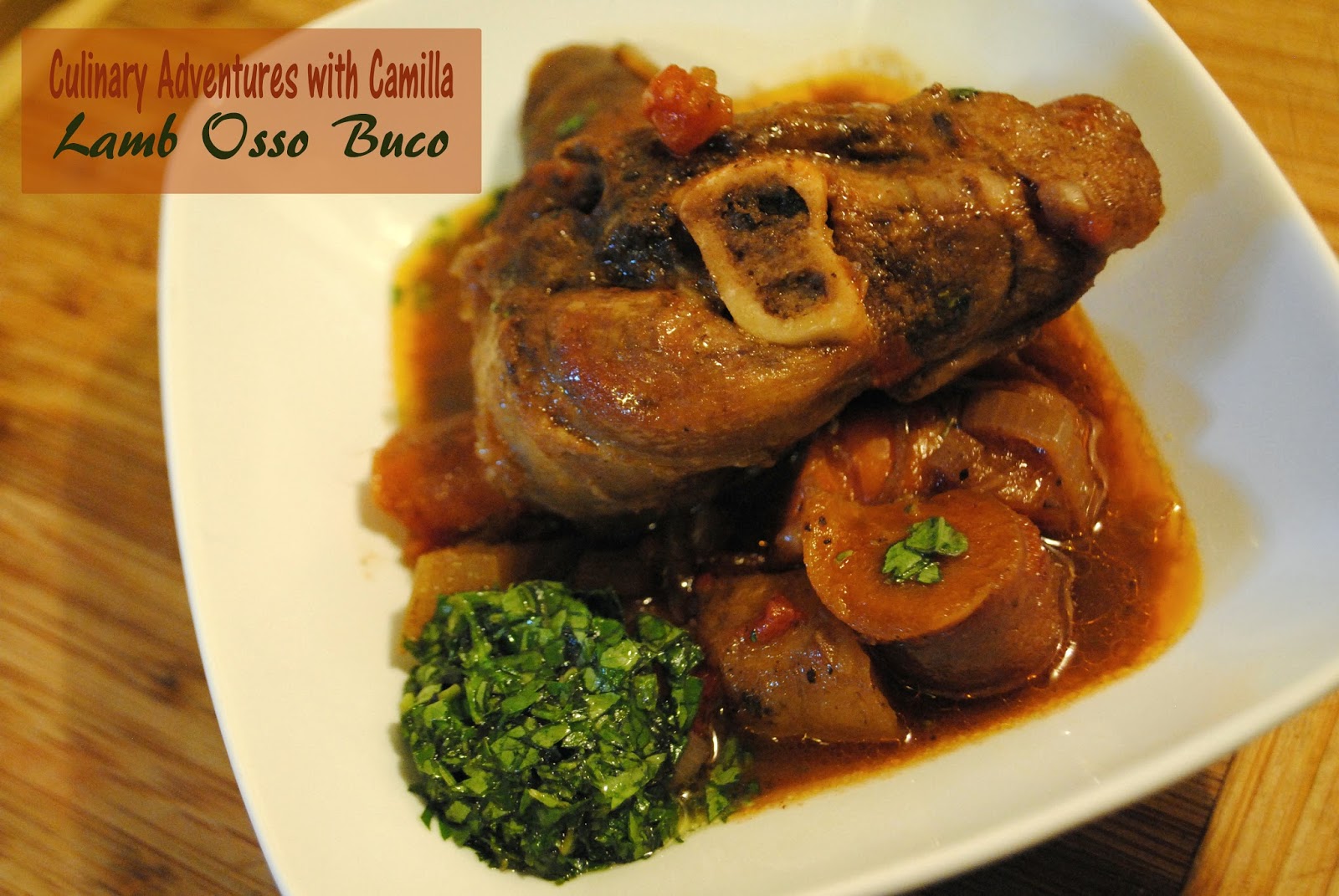 Of course I was most compelled to make one of the classic, simple dishes that Brendan, the man who eventually wins her heart, makes for her while they are at his grandmother's villa in Tuscany. I agonized over "spinach gnudi with a butter sage sauce; roasted leg of lamb with green pepper-apple-onion curry, arborio rice, and mango chutney; ...lasagna with veal Bolognese...breaded veal cutlets...." All of those are drool-worthy in my book. Finally, I decided to try my hand at a tender osso buco, well a faux osso buco since I don't eat veal. But that is a commentary for another post. The flavor develops, so I made these the night before we planned to eat them. 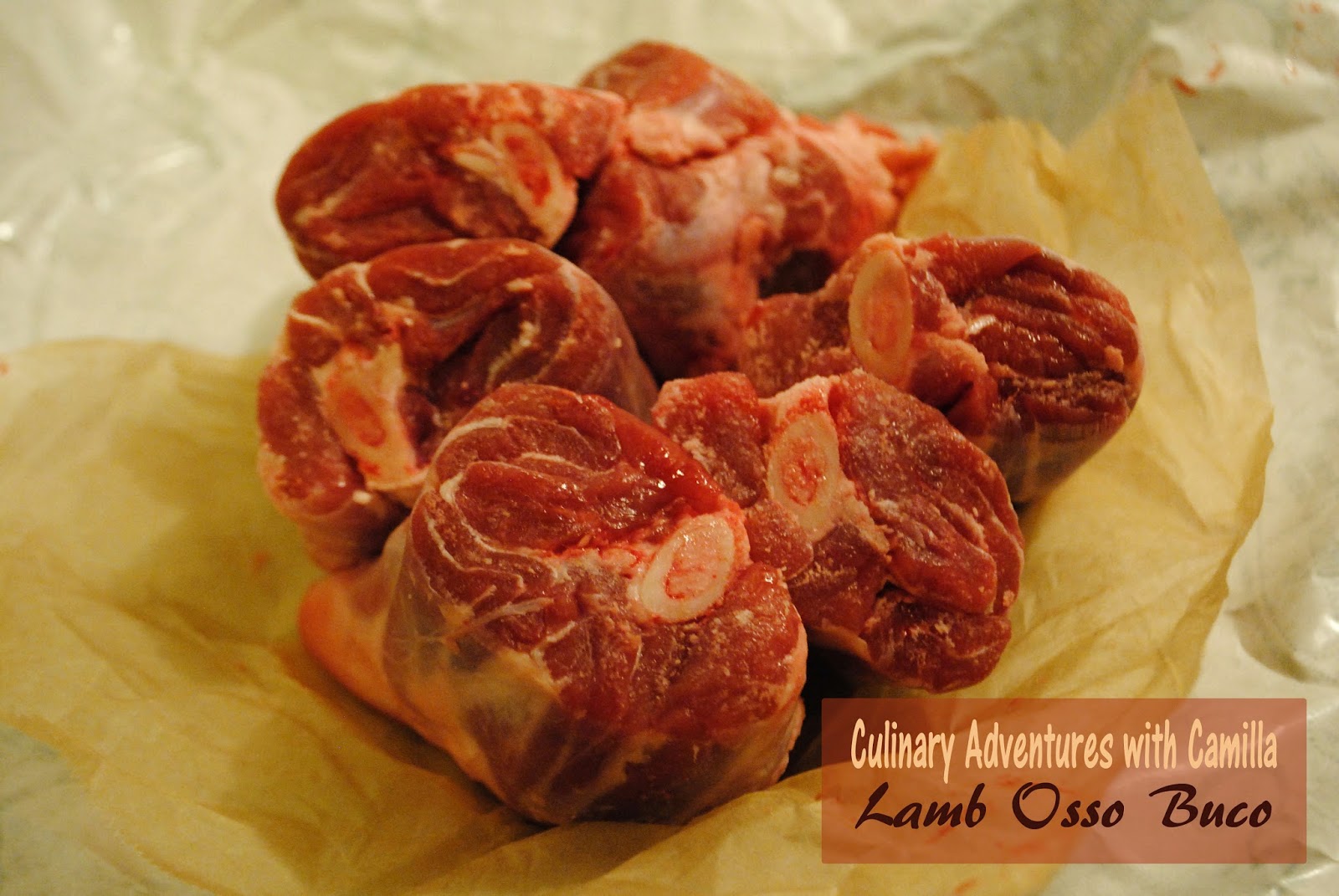 I picked up lamb shanks and had the butcher halve them to reveal the bone. Osso buco translates as "hole in the bone," referring to the delectable marrow in the center of the shank bone. 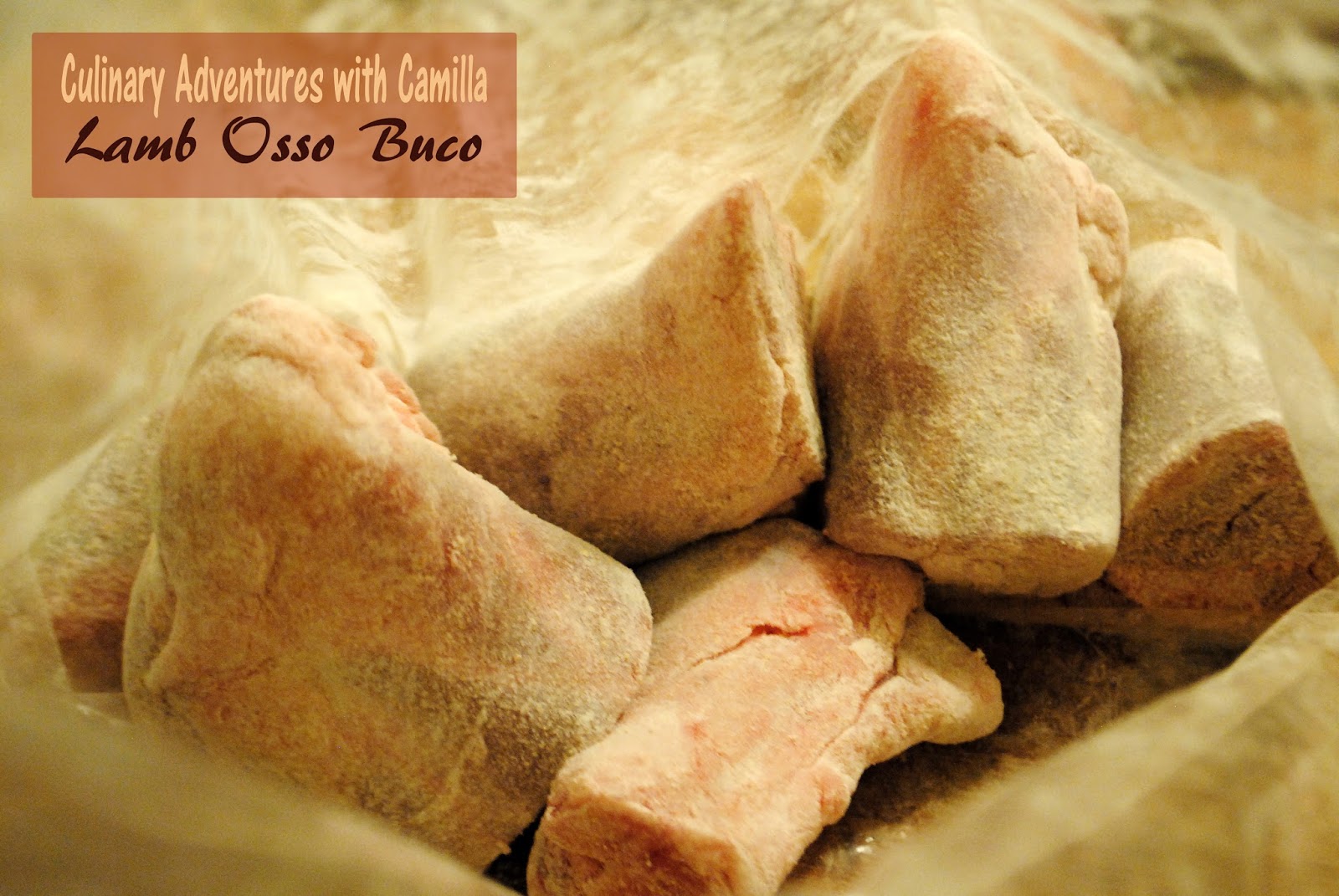 Season the lamb shanks with salt and pepper. Dust them with flour, shaking off the excess.

Preheat the oven to 300° F. In a large skillet, heat the olive oil. Add shanks and cook over medium heat until richly browned, about 3 to 4 minutes per side. Transfer the shanks to a roasting pan that's large enough to hold them all in a single layer without crowding.

Add the carrots, fennel, shallots, and black garlic to the dish. Add the farmhouse ale, water, and tomato sauce. 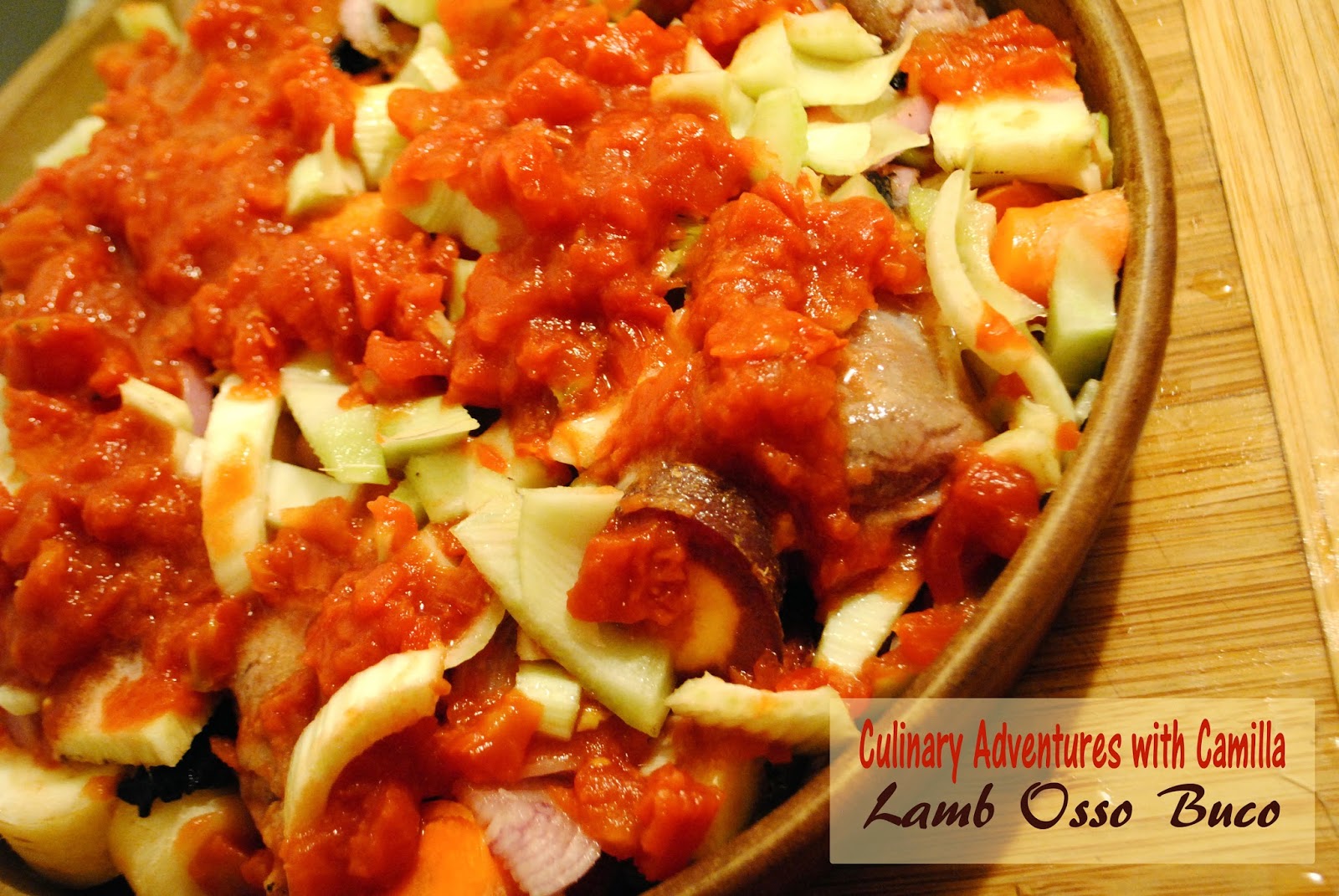 Cover the roasting pan with foil. Transfer the shanks to the oven and braise for 3 hours, or until the meat is very tender. 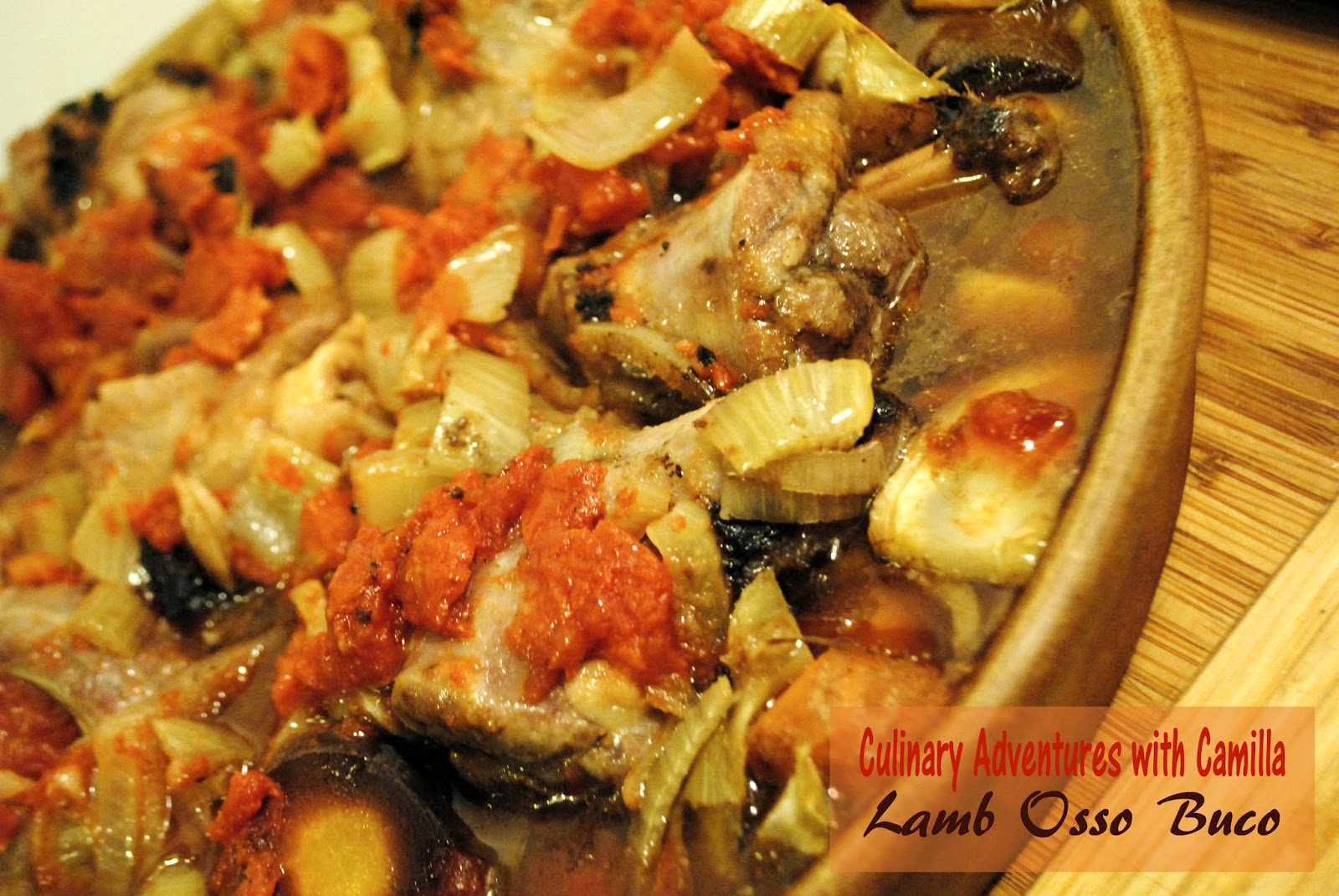 Let cool completely before sticking in the refrigerator.

Before you're ready to serve, let the shanks come to room temperature. Move the meat, veggies, and sauce into a large soup pot. Bring to a boil over medium heat, reduce heat to a simmer, and braise for another hour.Transfer the shanks to plates. Bring the sauce back to a boil until sauce reduces by half. Ladle the sauce on top and serve with gremolata - here's one version of gremolata that I made with my Spice it Up! class.

Click to see what everyone else read in January 2020: here.