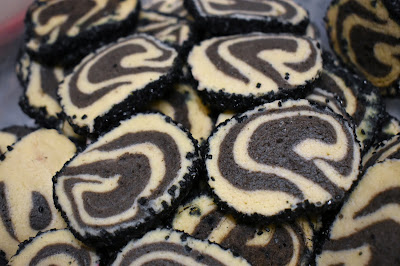 This is another cookie creation that was spawned by watching an inspiring fifteen minute video by cookie artiste Susan Spungen last month. Thankfully I found the article: 12 Stunning Cookies that will Impress Everyone You Know that featured Spungen's recipes and more gorgeous photos of her creations.

But, as you can see, my marbling technique needs a little help. These were just barely swirled. But they were delicious! I'll try again as soon as I swap out the igniters in my oven. They decided to misbehave - as in not heat up enough to kick on the oven - and I'll be without an oven until the parts come in. Jake joked that my oven is on strike since it hasn't had a day off since October. Probably true...

This is very slightly adapted because my black tahini dough wasn't as dark as I wanted. So, I added in some cocoa powder. I will be making these cookies again this weekend - in my parents' oven - and I'll post photos if my marbling looks better. 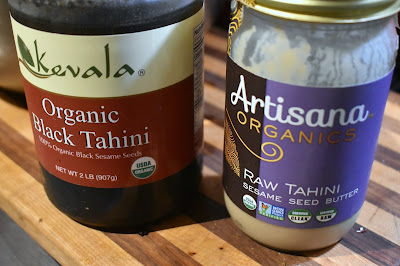 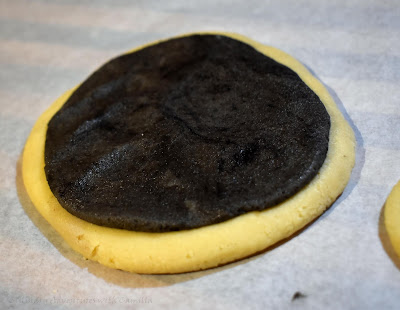 In a small mixing bowl, whisk to combine flour and baking powder Set aside.

In a medium mixing bowl, cream together butter and powdered sugar until lightened and fluffy, approximately 2 to 3 minutes. Add the eggs and vanilla. Beat until combined, approximately 2 minutes.

Add in the flour mixture. Beat on low until combined, then knead until the dough comes together in a ball. Divide the dough into thirds. Place two-thirds into one bowl and one-third into another.

Divide each dough in half and pat into a round disc. Place the (smaller) black disc on top of the white disc. Gently roll into a cylinder to form the swirls of black and light dough. 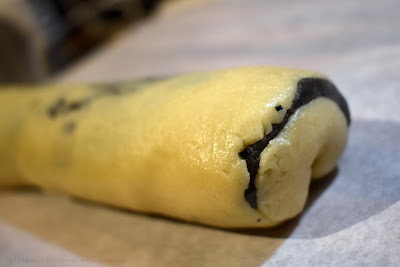 Press the cylinder into the sanding sugar to coat the outside. Wrap in plastic wrap and place in the freezer for at least one hour.

During the last 20 minutes of chilling, preheat the oven to 325 degrees F. 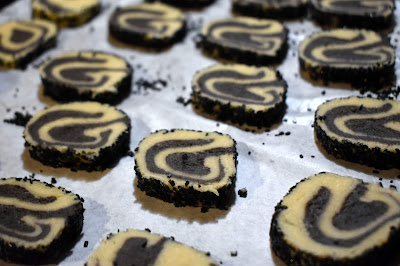 Let cool for a few minutes on the baking sheets, then transfer cookies to wire racks to cool completely.