This month, I hosted the first Food'N'Flix event of 2020; and I asked the bloggers to watch Always Be My Maybe and, hopefully, be inspired into the kitchen.

You can read my invitation: here.

Not surprisingly, since the female lead character is a chef who makes largely Asian cuisine, we all leaned that way. I had been hoping that someone went for a dish that drew on the scene with Keanu Reeves in what I'm going to call the avant garde restaurant. I mean...dishes that play with the concept of time, an all-black monochrome course, soup extracted in a centrifuge, or sugar bubbles?! All sounded so ridiculous as to be intriguing. Ha.

That scene reminded me of a $400 per person dinner that I was lucky enough to get as a work assignment years ago. This was one of the courses with new age-y foam. 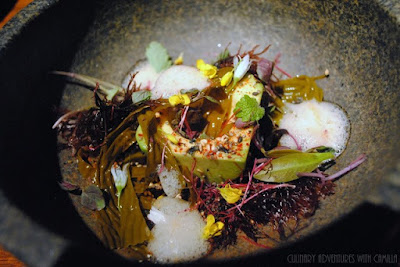 On the menu it was just described as "sculpted avocado with hand-foraged seaweeds." No foam listed. My husband scoffed when he saw my photos - I didn't take him, I took a girlfriend who I thought would appreciate the experience more - saying that it looked like a spittlebug crawled across the plate and made a mess. It was definitely an experience...not quite as off-the-wall as the venison sous vide that came "with headphones so you can hear the sound of the exact animal you are about to consume, illustrating nature's life to death cycle."

But enough of that. Here's the #FoodNFlix Always Be My Maybe round-up... 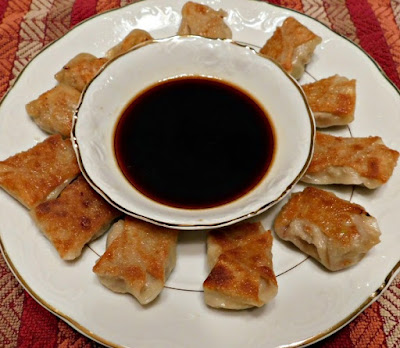 Wendy, of A Day in the Life on the Farm, was the first in and offered up Mandu and Korean Meatballs and the Weekly Menu. Wendy comments, "The cast is completely Asian which is pretty unusual.  Marcus is Korean American and his family often takes in Sasha whose Vietnamese parents must leave her home alone while they work.  Sasha learns a love of cooking from Marcus' mother and often helped her in the kitchen.  The death of Marcus' mother and the animosity Sasha feels towards her parents paint the background of their lives."

"There is a lot of food, mostly Asian.  I decided to make pot stickers and then found that in Korea dumplings are called Mandu." 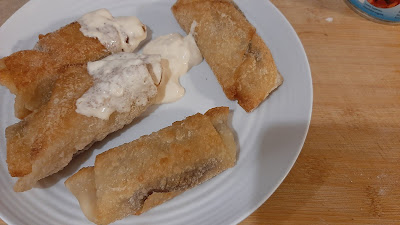 Kimberly of Coffee and Casseroles was next and shared Deep Fried Wraps. She admits the film wasn't for her: "I didn't really care for this film. I've said before, I'm not a big fan of romantic comedies, and this really felt too formulaic for me. The highlight for me were the scenes with Keanu Reeves playing a hyped up version of himself."

But she was inspired into the kitchen regardless. Kimberly writes, "I was thinking about the potstickers and I ended up going with a super simple snack. A deep fried wrapped banana. Super simple, simple, simple dish (3 ingredients so can't really call it a recipe) with just sliced banana, chocolate and eggroll wrappers." 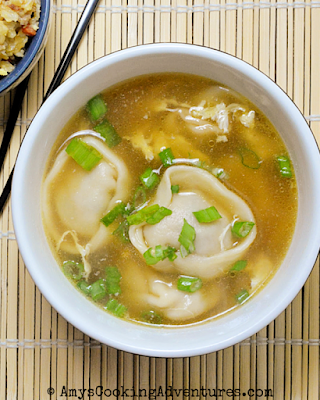 Amy of Amy's Cooking Adventures posted Manduguk (Korean Dumpling Soup). The movie, for her, was a one-timer; she enjoyed the movie but doesn't plan on watching it a second time. She was inspired by one of the opening scenes, sharing, "Sasha is cooking with Marcus’ mom, making soup.  I looked it up and it was a kimchi-based soup, which, while likely delicious, would be a really hard sell with my family.  I kept searching and found Manduguk, a Korean Dumpling Soup, very similar to wonton soup."

Then she opted to make the entire soup from scratch, including the dumpling wrappers. Very impressive, Amy! She did caution that it was a longer process than she anticipated. "I ended up starting this recipe at 5:00 on a weekday (we often eat around 5:30, though sometimes as late as 6:30).  The recipe is intensive, and we didn’t eat until almost 7:30!  Nearly unheard of in my house!  Thankfully, it was delicious and enjoyed by all!  Just maybe start a bit earlier…unless you like eating really late!" 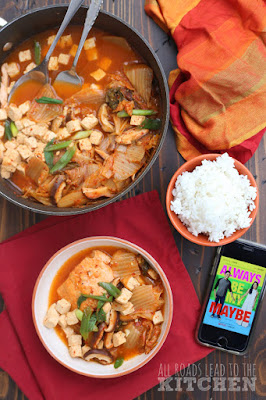 The group's founder, Heather of All Roads Lead to the Kitchen, joined us with her version of Kimchi Jjigae. She wrote: "The whole Kim family is in the kitchen preparing dinner, and Mrs. Kim (aka Judy) is walking Sasha through the process of making Kimchi Jjigae. She tells her that she does such a good job and asks her if she's sure she's not Korean, which earns a huge smile. We see a montage of the kids growing up and spending lots of time together, while Sasha continues to cook with Judy." That "thermos soup" is one of our family favorites. I'm glad someone shared it for this movie. 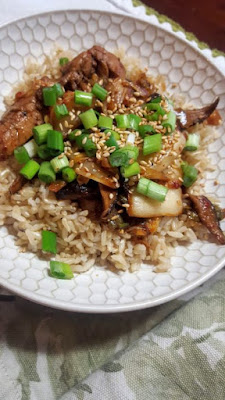 Debra of Eliot's Eats offered Pork Tenderloin Stir-Fry with Kimchi for her post. She admits "OK, all of this food is too frou-frou and weird for me. I originally felt compelled to make Kimchi Jigae, a comfort food that Sasha moves to elevated cuisine. If you’re interested, this was the recipe I was going to use.  Then, one Saturday I was watching Milk Street and I decided this recipe might be even more delicious." I'm glad she opted for that one because I can't wait to try it. 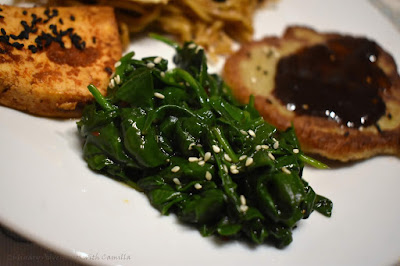 I ended up making Siguemchi Namul (Korean Spinach Salad) because of the scene between Sasha and Marcus' mom when Judy says, "...we Koreans use scissors for everything. Vegetables, noodles...our children."

I went in search of something to chop with my kitchen scissors and finally decided on sigeumchi namul, an easy side dish (side dishes are called banchan in Korean) made with spinach. This really is little more than blanching the spinach and seasoning it. But it was delicious and so simple to make.

Next month Heather will be hosting as we watch Nina's Heavenly Delights. I am completely unfamiliar with that movie and hope I can get my hands on a copy. Stay tuned.