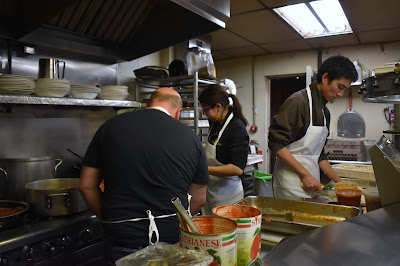 This month the Italian Food Wine Travel bloggers are focusing on wines made from a cooperative. Kevin of Snarky Wine is at the lead; you can read his invitation: here. Susannah of Avvinare was able to arrange for some samples from Prestige Wine Imports Corp. But I live on the wrong coast and timing was tight. So, my wines from the cooperative, Val d'Oca, didn't arrive in time to be featured for this event. Stay tuned...I'll be featuring those bottles soon!

If you are reading this early enough, feel free to jump into the conversation about Italian wine cooperatives with the #ItalianFWT bloggers. We'll be live on Twitter on Saturday, February 1st at 8am Pacific time. Follow the hashtag #ItalianFWT and be sure to add it to your tweets if you chime in. I will be linking to all of the articles which will be live between Friday, January 31st and early Saturday, February 1st. 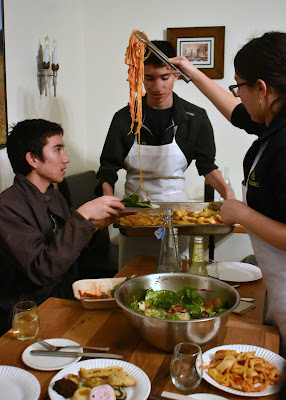 If you're wondering how this ties into this month's theme, read on. Our robotics team just hosted a fundraising dinner at one of our favorite Italian restaurants...and at the end of the night, I had a red wine from a wine cooperative in Abruzzo. It was serendipitous for this month's event.

Jake and I have known Anna and Emanuele Bartolini for years. We met them just before their opened their first restaurant in Carmel, La Balena. It's been eight years or so. They have watched our boys grow up both in person and virtually on social media. This was at Anna's birthday party several years ago at La Balena. 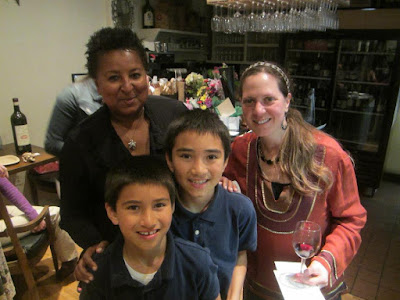 So, when Anna saw that the boys' robotics team was fundraising for an upcoming trip to China, she offered to help.

Through a handful of messages, they offered to open up Il Grillo - La Balena's sister restaurant - if the kids wanted to make pasta. Originally we just talked about them selling their fresh pasta. Then it morphed into them cooking and serving it. I got the word out...and lined up five team members to head over there at noon on a Sunday. 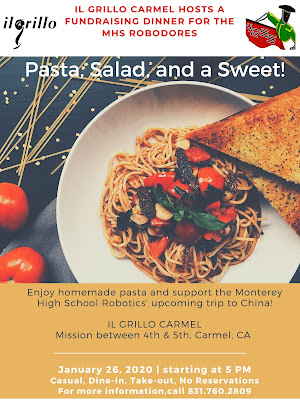 Emanuele gave them a brief tutorial on how to use the pasta maker. 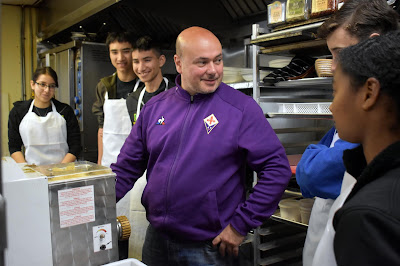 Anna did a demonstration and prepped the ingredients for batch after batch. 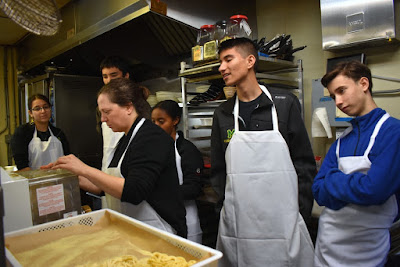 Oh, my goodness, that machine is magical. They tossed in the semolina, added water, and the machine did all the mixing. They chose the pasta shape and chopped off the pasta coming out of the extruder. They started with fresh spaghetti. 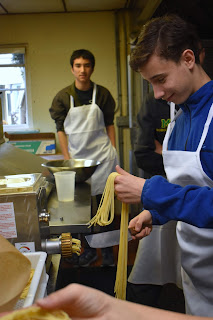 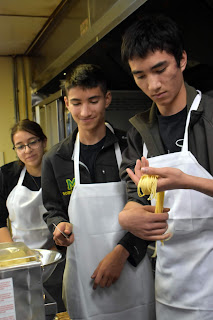 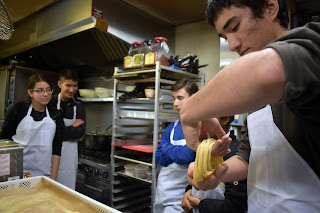 Finished pasta went into trays and were dusted with more semolina. 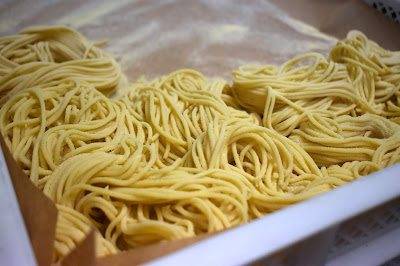 They moved on to strozzapreti. 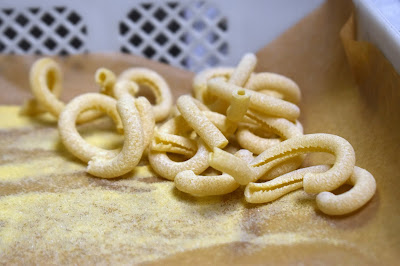 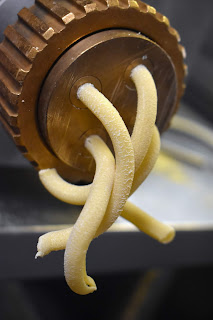 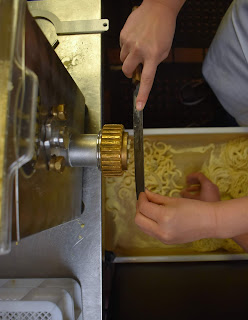 And the team captains made a batch of egg dough that they kneaded by hand. But we forgot about that dough when it was resting in the fridge. So, I have that here at home and we'll make something with it soon. 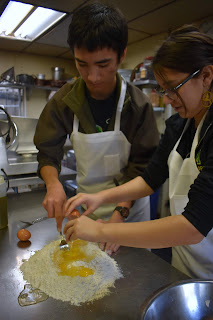 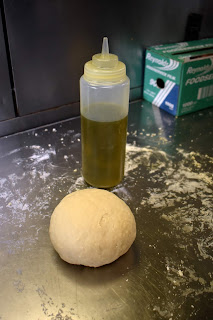 As time pushed towards our start, Emanuele came back from La Balena and showed the kids how to cook the pasta and make some sauces. This is one of my favorite photos of the night: one of our co-captains running the stove. She had so much fun.


We put up a sign to let people know the restaurant wasn't open with its regular menu. 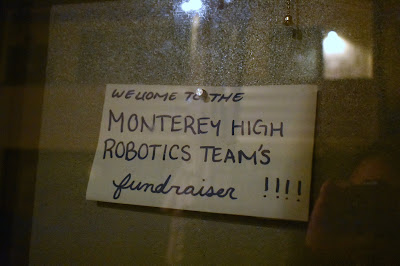 While kids greeted diners, seated them, and started serving salads, I bagged up some of the fresh pastas to sell. We offered 4 servings for $10. 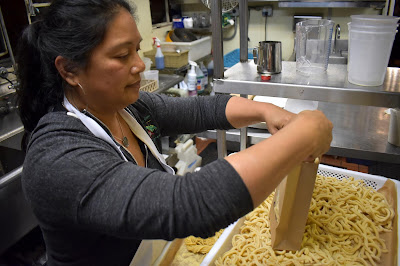 And I let people know that cooking fresh pasta is very different from the dry stuff. 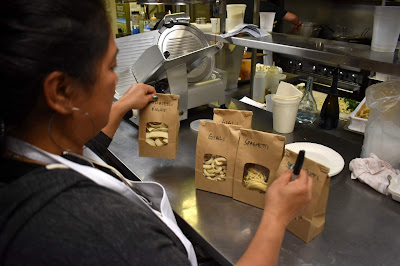 Boil the water, add the pasta, as soon as it floats, it's done. But, it'll probably only take two minutes to cook. 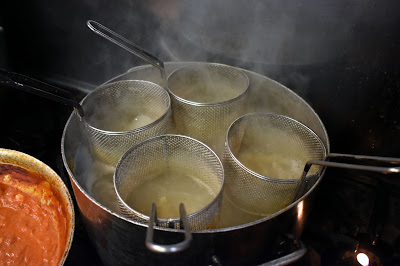 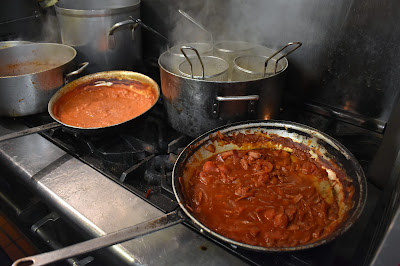 At the end of the evening, the crew finally cooked for themselves and we sat down for the family dinner. Phew. I hadn't been off my feet in eight hours! Neither had the kids, but they're young and energetic. 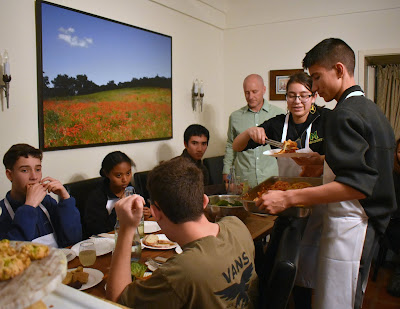 And, as luck would have it, Anna mentioned that the wine was from one of her favorite wine cooperatives in Italy. What?! I was so tired, I just made a note of the bottle and figured I'd do some research after the fact. 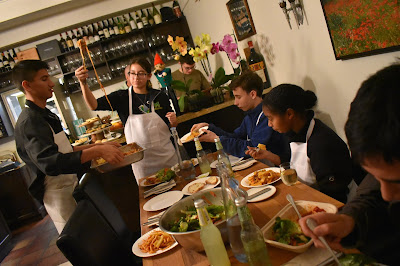 So along with my fresh pasta, Jake and I sat down with a red wine from Vallevò. Anna poured herself their Rosé. 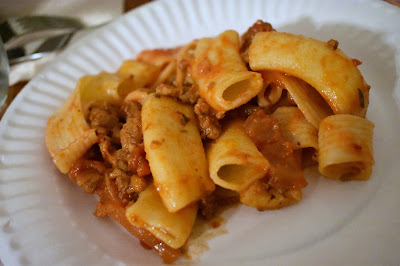 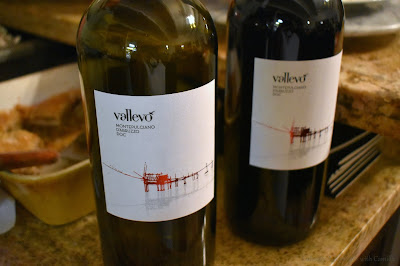 Vallevò is a small co-operative winery in the Abruzzo region of Italy located near the village of Chieti on the Adriatic. A wine cooperative, like any other cooperative, is an organization run jointly by its members who also share in the benefits or the profits.


Over the past four decades, Vallevò has grown to more than 500 members with nearly 2,000 acres of vineyards. This coop produces a large variety and volume of wine. They bottle 10%, or so, of the wine and sell it at very reasonable prices. The remaining wine is sold to other producers - some big names! - and sold under those labels. 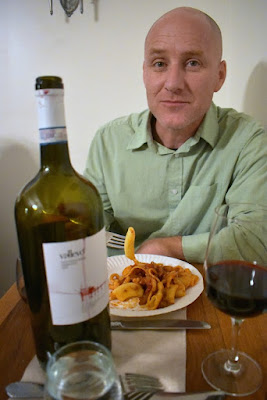 I have often seen wines described as 'quaffable.' And though I love the look of that word, I've never used it to describe a wine. Till now. This Montepulciano is quaffable, that is to say easy to drink. And Anna shared that it is also easy on the pocketbook. Win, win!

With a bold nose of black fruit, the aromas match the taste with those same black fruits on the palate with a touch of damp earth, dry herbs, balanced acidity, and moderate tannins. This seems a great everyday wine and would pair nicesly with everything from burgers to pizza. And it was delightful with the fresh pasta and Bolognese ragù that the kids served.

As I mentioned earlier, I will be receiving a selection of wines from Val d'Oca. So I'll be writing more about wines from a cooperative cellar very soon. But next month the #ItalianFWTgroup will be writing about women in the Italian wine industry with Pinny of Chinese Food & Wine Pairings at the lead. Stay tuned.