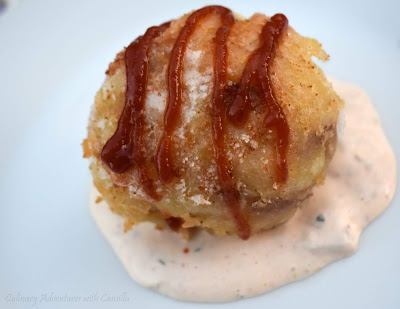 When I heard Chef José Andrés being interviewed on NPR last month, his story was intriguing and compelling, so much so that I went home and ordered the book - We Fed an Island: The True Story of Rebuilding Puerto Rico, One Meal at a Time by José Andrés* - immediately.

I'm including a link to the broadcast because, honestly, I think you must hear his story, but you can skip the book. The story is so important and what he accomplished was phenomenal, but I found the book tedious and difficult to read. 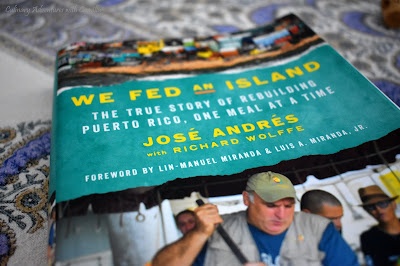 José Andrés is a chef, humanitarian, and founder of World Central Kitchen. He arrived within a week of Hurricane Maria devastating the island of Puerto Rico and set about trying to feed everyone he possibly could. Andrés rallies huge support from volunteers and organizes a network of kitchens around the island to provide chicken and rice as well as ham and cheese sandwiches to everyone struggling to live without food, clean water, electricity, and other services and conditions after Maria.

He's passionate and dedicated. There's no doubt about that. And he's openly critical of FEMA, Trump, the Red Cross, and other agencies who stymied his efforts with bureaucratic red tape again and again.

But there are only so many times that I need to read how inedible military MREs (meals-ready-to-eat) are. Actually, once is sufficient. I would have preferred he get on with detailing the food he was able to provide instead of harping on the fact that what was provided by our government was not a good option.

And FEMA is ineffectual. I get it. I didn't need a communication log with how many contracts they held up because of a chain of command, or lack thereof. Or how many times he tried to get access to a meeting, but didn't have the proper credentials.

Also, Trump is uninformed and says asinine things. Yep. Not news to me there either. I actually found myself cringing as Andrés quoted Trump. It's one thing to hear those soundbites on NPR; it's another to see how inarticulate Trump is...in black and white...on the page. Ugh.

I struggled to finish this book which I found so disappointing because I wanted to love it. I wanted to shove my copy into friends' hands with a hearty endorsement and gush, 'you have to read this!' But I found it pure drudgery to keep flipping these pages. However, this doesn't diminish what José Andrés was able to accomplish in Puerto Rico, or take away from his critique of our current disaster relief procedures. He's amazing and we need more people like him. I just think he needs a ghost writer, or a better editor. 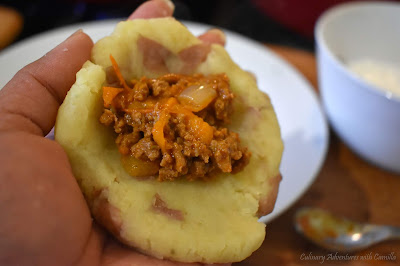 I thought about making ham and cheese sandwiches - with lots of mayonnaise as Andrés instructs his team of volunteers - but, then, I wanted to make something new-to-us and a little bit more local to Puerto Rico. And when I started to search for recipes, I loved the idea of these mashed potato balls filled with spiced ground beef. It sounded delicious...and they were.

Picadillo is typically made with potatoes, olives, and raisins. Since the picadillo was being surrounded by potatoes, I skipped those...and I didn't have olives or raisins. I swapped in capers for the olives and skipped the raisins altogether. Also, instead of tomato sauce, I used fresh tomatoes from D's garden. So, this is definitely not a traditional recipe, but we loved it and will definitely be making it again. 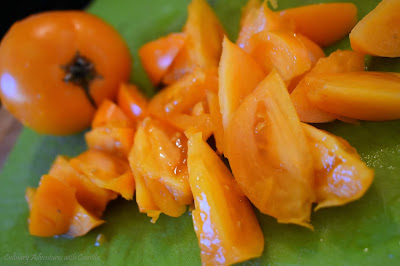 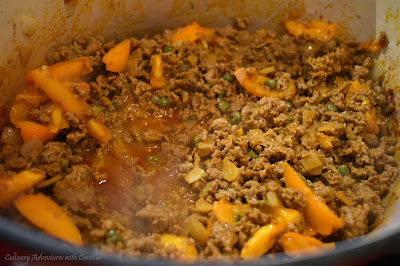 Picadillo
Heat oil in a large pan and stir in onions and bell peppers. Cook until the onions are softened and beginning to turn translucent, approximately 5 to 6 minutes. Add the ground meat and season with paprika and cumin. Cook until the meat is browned completely. Stir in the tomatoes and capers; simmer until the tomatoes have lost their shape and liquid has been absorbed into the meat. Season to taste with salt and pepper, as needed. Stir in the fresh oregano leaves and set aside to cool.

Papas Rellenas
Cube the potatoes and place in a pot, covered with water. Boil until fork tender, approximately 20 minutes. Drain potatoes and return to pot. Mash with butter 2 T until they are smooth and gummy. 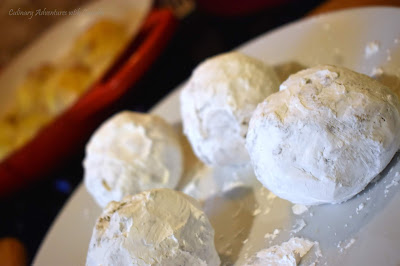 Dust your hands with cornstarch and place 1/2 C cornstarch in a small mixing bowl. Flatten about 1/2 C mashed potatoes into a disk in the palm of your hand. Add a tablespoon of picadillo to the center of the disk and bring the edges of the potato up and around. Seal the edges by rolling the potato into a smooth ball. Roll the ball in cornstarch. Repeat until all the potato has been used, making sure to coat your hands each time so they don't get sticky.

Pour oil (I used canola oil) into rimmed skillet. You'll want the oil to come up to about half the height of the balls. Once the oil is hot, gently lower the balls (I did this in two batches) into the oil and cook until golden brown. I turned mine occasionally, but they took about 6 to 7 minutes to get completely browned.

Remove from the oil with a slotted spoon and place on a paper towel-lined plate to drain. 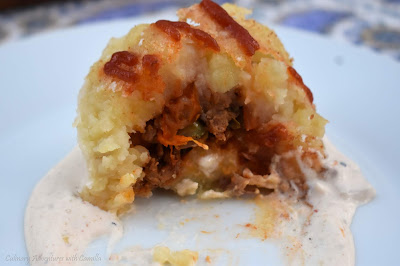 To serve, place small pool of sriracha-spiked aioli on an individual serving plate. Top the aioli with a potato ball. Drizzle with more sriracha and serve immediately.

Here's what everyone else read in October 2018: here.