By Camilla M. Mann October 01, 2018
This is a sponsored post written by me on behalf Mt. Brave Wines, one of the #MerlotMe event sponsors.
Complimentary wine was provided for this post and this page may contain affiliate links.
However, all opinions expressed here are my own. 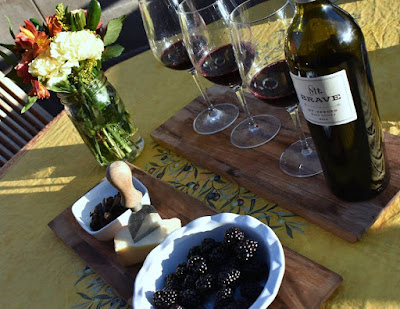 The month of October always means lots and lots of Merlots as I make my way through the generous samples sent by participating wineries for #MerlotMe. So, here at Casa Mann, we're kicking off October 2018 with - as a I joked with my husband and our friend who joined us for dinner - "peasant food and pricey wine!" Thank you, Mt. Brave.* 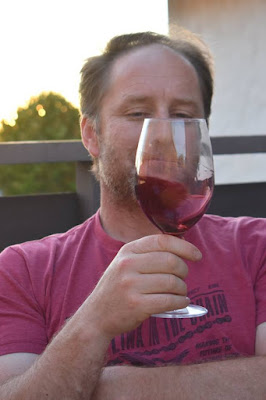 A century and a half ago, a German Presbyterian pastor named Peter Veeder regularly traversed the creeks and canyons of his, now, eponymous mountain in Napa Valley that reaches upwards of half a mile. And in 2007, winemaker Chris Carpenter began letting the mountain express itself in each vintage.

Originally from Chicago, Carpenter is a founder of the Napa Valley Convivium of Slow Food USA. A wide range of experiences from an internship in Tuscany to a deeper exploration in Perugia helped shape Carpenter's style of "an old world sensibility paired with a new world sense of ambition and insight." 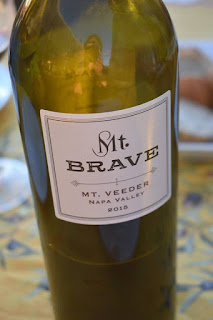 With a retail price of $80 this bottle of wine isn't cheap and we found it a little tight. But, after decanting, it opened up and revealed its subtle power. It doesn't explode with flavor, but sip after sip showed herbs and cedar balanced with dark fruit and a cocoa finish. We uncorked this and lingered over it with multiple courses.

We started with late summer blackberries, pickled green walnuts, multigrain baguette, and Tomme de Savoie cheese. Then we moved on to the main dish. The wine paired seamlessly with both courses and I even tried a sip or two with the apple-pear pie that D baked for dessert! 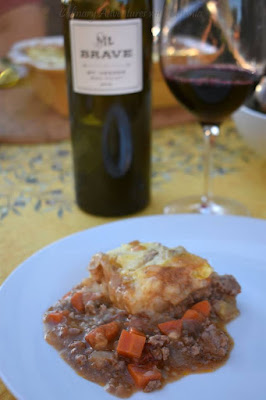 Bear in mind that the seasonings in the meat were the addition of my Enthusiastic Kitchen Elf; so, it's definitely not a traditionally-seasoned pie. We served this with a green salad dressed with an apple vinaigrette. Thanks for bringing that, Jenn. I definitely need that recipe, too.

Heat the oil in a large pan. Add the onion and carrots and cook until the onions are softened and beginning to turn translucent, approximately 4 to 5 minutes. Stir in the garlic and the meat. Cook until the meat is browned through. Sprinkle the flour over the meat and toss to coat. Season with cumin, chile flakes, cardamom, and turmeric. Cook for another minute or two. Stir in the tomatoes and pour in the broth and the wine. Bring to a boil, then let simmer until the tomatoes have lost their shape and the sauce has thickened slightly. Season to taste with salt and pepper. Set aside.

Topping
Cut the potatoes into cubes. Place them in a pot and cover them with water. Bring the water to a boil and cook until the potatoes are tender, approximately 15 minutes. Drain and place the potatoes in a mixing bowl. Mash them with butter and milk until smooth. Stir in shredded cheese. Season to taste with salt and pepper.

To Finish
Preheat the oven to 400 degrees F. Spoon the filling in to a rimmed baking dish (I used a 10" x 10" ceramic dish). Top with the mashed potatoes, smoothing the top with a spatula or wooden spoon. Place the dish on a baking sheeting and bake for 20 minutes. Remove from the oven and let cook for 15 minutes before serving. 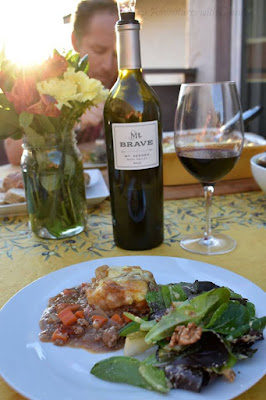 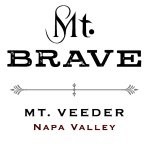