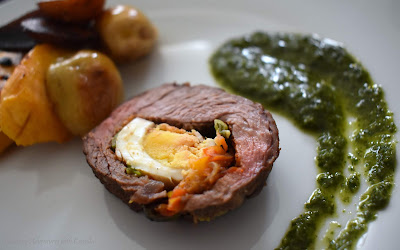 In February we kicked off the project with Cuba; in March we celebrated St. Patrick's Day with a tabletop trip to Ireland! Thailand was our April destination. May had us headed to Kenya. In June, Evelyne asked us to create a dish from Sweden and July was New Zealand. Last month, in honor of the 2018 World Cup winner, we traveled by tabletop to France.

Before I get to my Argentinian recipe, take a look at the other offerings...

When I saw that we were focusing on Argentina, I knew that I had my work cut out for me in dissuading the boys away from two of their absolute favorites... 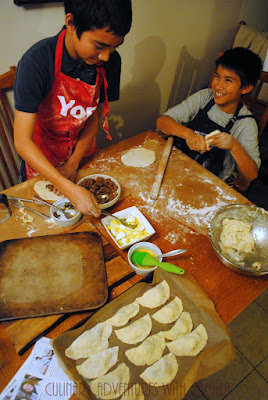 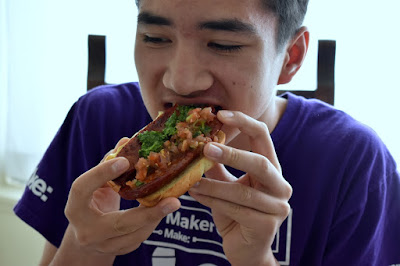 So, I looked for a recipe that would go well with chimichurri and included meat. I had just done a completely vegetarian dinner party and my omnivores were craving beef. I found a recipe that was similar to a Filipino Morcon and ran with that: Argentinian Matambre. You will need to prep the meat the night before you plan to serve. 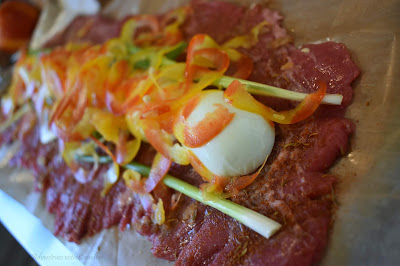 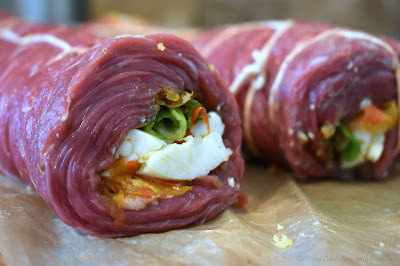 Chimichurri
In the bowl of a food processor, combine all of the ingredients except the olive oil, salt, and pepper. Process until smooth, drizzling in the oil until desired texture; season to taste with salt and pepper. Transfer to a bowl and let stand for, at least 30 minutes. If you are making this ahead of time, place in a lidded jar and keep in the refrigerator.

Matambre
The Day Before
Place the butterflied flank steak on a cutting board lined with wax paper or parchment. Pound the steak with a rolling pin or meat mallet until it is uniformly thick (or thin). Place the steak in a lidded container. Pour the vinegar and lemon juice into the container. Rub in the zest as much as you can. Cover and refrigerate overnight or at least six hours.

Remove the steak from the marinade and place it on a flat surface. Season the meat lightly with salt and pepper on both sides. Arrange the hard-boiled eggs down the center of the meat. Place green onions alongside the eggs and add a layer of bell peppers over the eggs.

Roll the steak as tightly as you can, being careful to keep the fillings enclosed in the meat. Place the roll seam-side down and tie it securely as you would a roast.

Heat olive oil in a skillet and sear the roll evenly to achieve a nice browned layer. Place the roll into a casserole or baking dish and pour the beef broth and the remaining marinade over the meat. 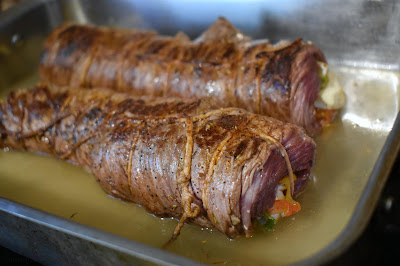 Bake the roll for one hour. Once done, remove the meat from the oven and let it rest for 10 to 15 minutes before slicing. 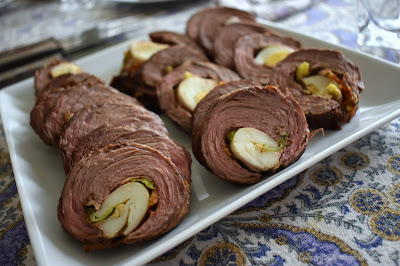 I like to slice the rolls into 1/2" thick pieces and serve it with chimichurri. My Enthusiastic Kitchen Elf made a roasted potato-plantain side dish. 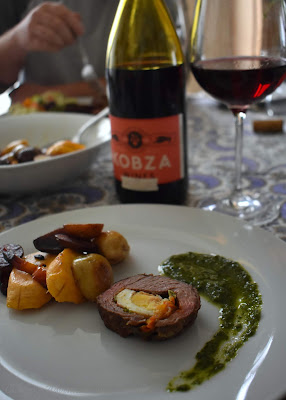 And I rounded out the dinner with a local-to-me red wine. Felicidades! I can't wait to see where Evelyne has us headed next in this #EattheWorld adventure.