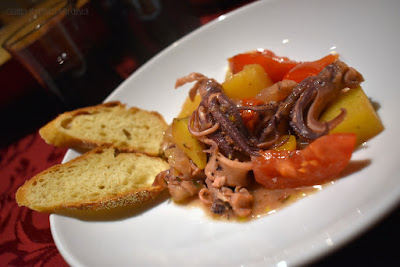 This month, Jeff of Food Wine Click is leading the Italian Food Wine & Travel bloggers in an exploration of Aglianico. You can read his invitation: here.

Take a look at all the great ideas from our group...


Campania
I've been to Campania twice - once when I lived in Rome after college and once when I led a family trip to Italy for a three-week vacation. With the au pairs, we took a train from Rome to Naples and spent the day in Pompeii. With my family, we stopped for a couple of nights along the Amalfi Coast and visited Pompeii, too. Both of those visits were pre-digital; I was shooting slide film back then. And I had great intentions of scanning some slides to post with this, but time got away from me. Sorry. One of these days I'll be able to share all of my photos. Till then, I'm taking photos of prints or slides themselves. Silly, I know. 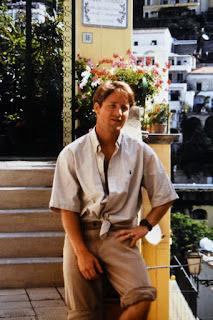 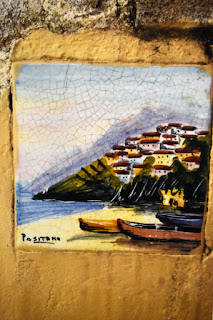 But I wanted to showcase the dusty hues of Positano against that cerulean blue water and matching sky. And the ruins of Pompeii that we had to ourselves on that chilly day in March 1997. 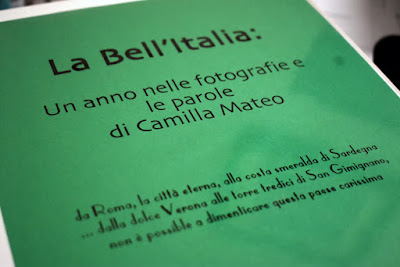 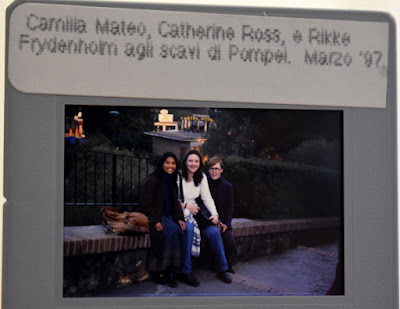 The fish market in Naples was one of my favorite memories and I'll talk more about that when I share my recipe below. 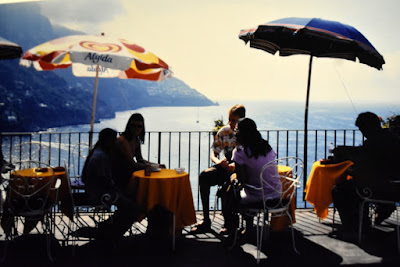 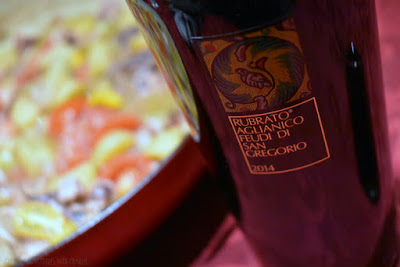 
The Aglianico varietal was completely new to me. One of the reasons I love belonging to these groups is the opportunity to expand my palate and learn from all these bloggers along the way. This month was no exception.

Recent DNA testing of the grape shows that it's not related to any previously identified grape varieties in Italy nor is it related to any grapes in Greece. It thrives in volcanic soils and the Mediterranean sun. Its inky hue is moody and, as its high in both acid and tannins, the taste is similarly dramatic.

I loved the intensity of the wine I found. It had notes of berries, fennel, and nuts. On the tongue it was full-bodied and spicy. What a delight!

On the Plate
While I considered what to share from Campania, I considered the ubiquitous Caprese salad. Named for Capri, an island on the south side of the Gulf of Naples, this is on our table from the moment tomatoes are ripe until they start to get mealy.

I also thought about making Pizza Margherita, but the art of making Neapolitan pizza is included on UNESCO's list of intangible cultural heritage. So, my version definitely isn't that. Traditionally Pizza Margherita must be made with the San Marzano tomatoes that grow on the volcanic plains south of Mount Vesuvius and Mozzarella di Bufala Campana, a cheese made with the milk from water buffalo raised in the marshlands of Campania and Lazio in a semi-wild state. My version is tasty, but the real deal is amazing! 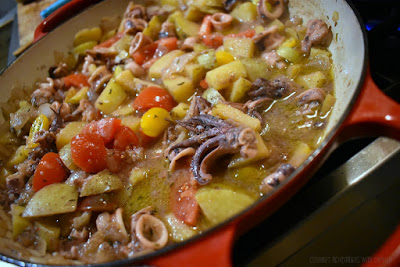 In the end I wanted to make a seafood dish for this event as walking through the seafood market in Naples tops the list of memories from Campania. Located not too far from the train station and the sea, through Piazza Nolana, proceed through the medieval gate Porta Nolana and make a left onto Via Sopramuro. It's one of my favorite memories of Naples. Seafood on ice. Seafood in buckets. All against the backdrop of these enormous brick-lined streets. Think clams, mussels, oysters, shrimp, squid, octopus, eel, sea bass, sword fish, anchovies, sardines and trays and trays of bacala, salted cod. 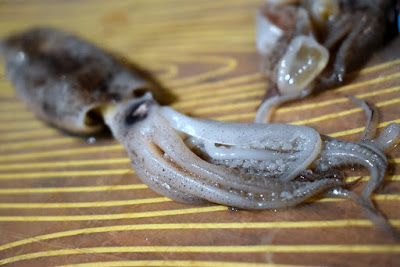 Totani is the name of these flying squid from Italy. I had local-to-me squid, but it worked just as well. Here's a little how-to on cleaning squid.
Ingredients serves 4 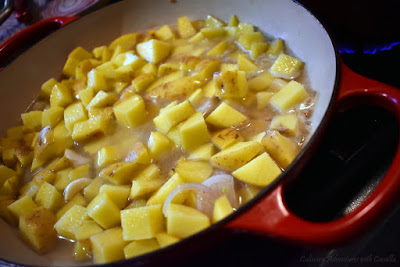 Procedure
Heat olive oil in a large, flat-bottom pan. Stir in the potatoes and toss to coat. Add in the onions and cook for a few minutes until the onions are softened. Pour in the wine and stock and bring to a boil. 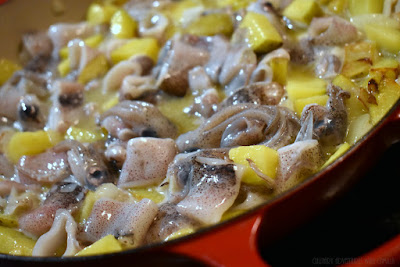 Nestle the squid into the potatoes. Reduce heat to a simmer, cover, and cook until all the liquid is absorbed and the potatoes are fork tender, approximately 30 minutes. Stir in the tomatoes and cook for just a moment until they are warmed through. Season to taste with salt. Serve immediately with slices of bread.

Looking Forward
Next month, I'll be hosting the group. Join us as we post and chat about La Primavera e Verdicchio. Look for an invitation post soon. Until then, cin cin!