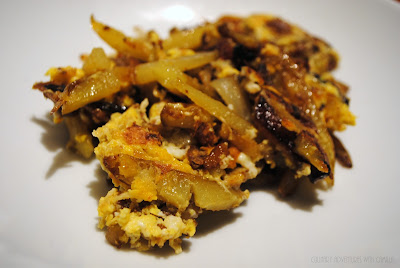 Well, this summer wasn't very productive in regards to our Cooking Around the World Adventure. But, we're moving ahead and cooking from Uruguay today!

About Uruguay...
Here are some interesting facts we learned...


'Uruguay', in the Guarani language, refers to the Uruguay River and means ‘river of the painted birds’. The river starts in Brazil and ends in the Rio de la Plata Basin which forms the water border between Uruguay and Argentina.

In Uruguay, cows outnumber people four to one. There are only 3 million people while there are 12 million cattle.

In 2009, Uruguay became the first country to provide every school-aged child with a free laptop and wifi access.

Uruguay has one of the highest literacy rates in the world with 98.1% for adults. 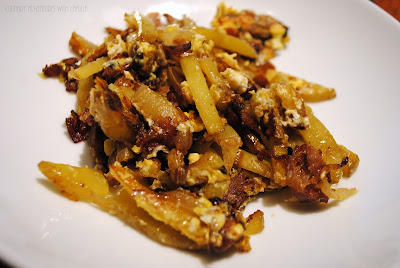 Just a note: this dish was such a hit, the boys requested that I add this to our breakfast rotation; they like it more than they like Chilaquiles. 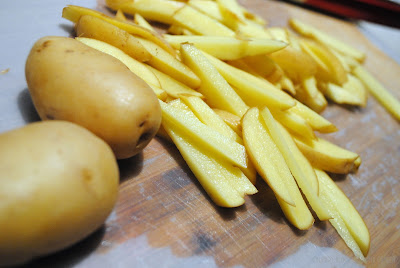 Procedure
In a large, flat-bottom pan or skillet, heat the olive oil. Add the onions and cook until they soften. Add in the potatoes, stirring to coat with oil. Cook until the potatoes start to brown around the edges, approximately 10 minutes. Stir in the ham and cook for another 10 minutes until the ham is crisped and the potatoes are nicely brown. The potatoes may need a few more minutes. Test one of the sticks to be sure. Then stir in the beaten eggs and cook until opaque, approximately 2 minutes. Season to taste with freshly ground pepper and serve hot. 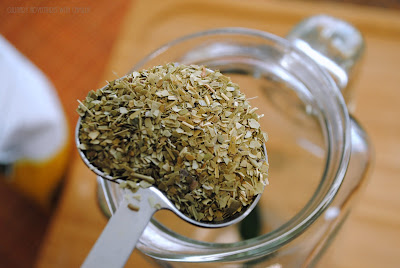 What is Yerba Mate?
Yerba mate is made from the leaves of the South American rainforest holly tree, Ilex guayusa. So, it's not technically a tea as 'teas' are made from the Camellia sinensis plant only. The yerba mate leaves naturally contain two dozen vitamins and minerals, over a dozen amino acids, and an abundance of antioxidants. In fact, in the 1960s, the plant was touted as "unequaled in nutritional value." It also contains the same stimulants as is found in tea, coffee, and chocolate. The caffeine content lies somewhere between that of green tea and coffee.

The Legendary Drink
I discovered many interesting legends about the drink, but my favorite is the Guarani legend. They say that the Goddesses of the Moon and the Cloud came to the Earth one day but they encounter a hostile Yaguareté (a jaguar). An old man saved them, and, in gratitude, the Goddesses gave the old man a new kind of plant, from which he could prepare a "drink of friendship."

For centuries, South America’s Aché Guayakí tribe have sipped yerba mate from a traditional mate gourd. The rainforest people claim that they derive invigoration, focus, and nourishment from yerba mate. 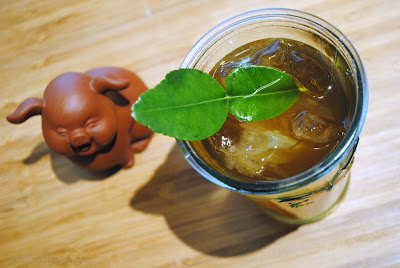 I had previously posted a recipe for Cold Brew Yerba Mate.

Moving Forward...
Well, this is a wrap on our cooking adventure to Uruguay. We're headed to the Uzbekistan. Stay tuned.