Fieldwork: About IBUs and Tasting Notes 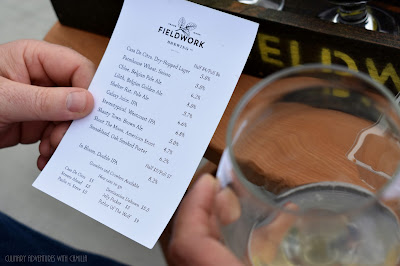 We've been waiting and waiting for Fieldwork Brewing to open their Monterey location. They finally got all their inspections done and beer was trucked in on Friday. 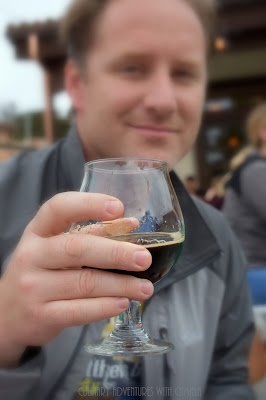 Pouring began on Saturday. So, on Sunday, Jake and I ran over there for a quick flight before dinner. 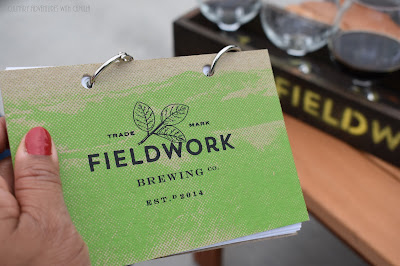 Fieldwork Brewing is a craft brewery that started in Berkeley and has taprooms in Napa, Sacramento, and San Mateo. And, now, they have an outpost here. It's a funky location - sandwiched in between Peet's Coffee and the historic Cooper-Molera Adobe - with an equally funky vibe. Think industrial steel mixed with twinkle lights. Jake claimed the wooden rocking chair right near the fire pit; my chair didn't rock. And our boys camped out at the metal table in the corner, noshing on their snacks from Trader Joe's.

About that, Fieldwork doesn't have a food menu, so they welcome outside food. I do wonder if they'll eventually have food available to order...or maybe partner with a local food truck. They did mention that the permanent furniture hadn't arrived yet. And they will be bringing in heaters soon. 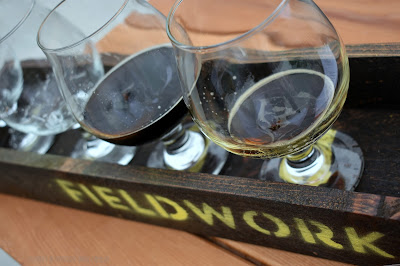 Being unfamiliar with their brews, we opted for a tasting flight. Jake picked two and I picked two. There were eleven on tap yesterday. It was a nice option to have the $2 taster pours; they also offer half glasses and full glasses. They also have 16-ounce cans of different brews that are to takeout only. We did leave with a can of Father of the Wolf, but we haven't tried that yet.

But, first, I want to comment on IBUs. Jake says I'm not a typical customer. I still think most beer drinkers will know and might select their beers based on IBUs. I found it very strange that (1) Fieldwork doesn't list the IBUs on their tasting menu and (2) the server I asked didn't know what I meant by IBU. That said, he did provide me with their beer specs and they have a bitterness scale for each beer there, rating them as low, medium, or high bitterness.


About IBUs
An IBU is a unit of measurement that measures how bitter a beer is, literally measuring the parts per million of isohumulone which is created as hops breakdown in the brew. But as brewing beer is an art of balancing ingredients and taste, a high IBU brew may be perceived as being less bitter if balanced with other flavors. For example, an Amber that measures 65 IBUs may taste less bitter than an IPA that clocks in at only 45 IBUs because the IBU scale is simply a component measurement. It's not about perception or preference.

The scale goes from 0 IBU to infinity, though you'll rarely see a beer with an IBU rating of higher than 120. Still, there is a sweet spot - for me - and I'll usually stick to beers with an IBU below 60 and Jake prefers them even less bitter. So, we like to have IBUs on beers menus so we know where to start.


Farmhouse Wheat Saison
This is their take on the classic Saisons of Belgium and France. It was wheat-heavy with strong grassy notes and a hint of citrus. This was my favorite of the four we tried. It was refreshingly light, but flavorful. If we were staying longer - or had food - I would have ordered a full glass of this one.


Lilith Belgian Golden Ale
We disagreed on this beer. The Lilith was Jake's favorite in that it has a classic flavor profile and style; I didn't think it was anything special. "Beer doesn't always have to be unique, does it?" he asked. Well, no. But that's one of the hallmarks of craft beer, for me. I like brewers who are pushing the envelope a little bit.


Shoot the Moon American Stout
I usually really like stouts. I like the heft and boldness of the beers. This one, however, had a little bit more bitterness and astringency than I expected. This was the only pour that neither of us drank. 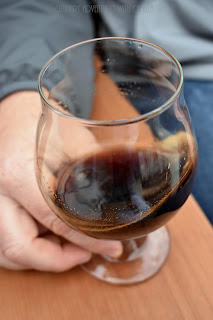 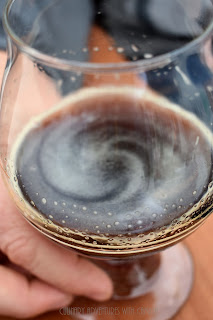 Before craft brewers took to adding chocolate, milk, and nut butters to Porters, the hallmark of the brew was smoke. For the Smoakland, the brewers smoked the oats over oak barrel staves that had housed bourbon. This is a delicious Porter that boasts a delightful chewy smokiness.

I was interested in getting a can of their sour, called Jelly Packet. But that was sold out. I did take home their Father of the Wolf, an aged Russian Imperial Stout. I'll report back on that soon.