By Camilla M. Mann November 25, 2014
D and I have been watching A Mind of a Chef. On one hand, I love that he enjoys the creative side of cooking - it's definitely not drudgery - but I'm torn between whether or not I appreciate his ardent insistence on his ingredients. But I do know where he gets it. 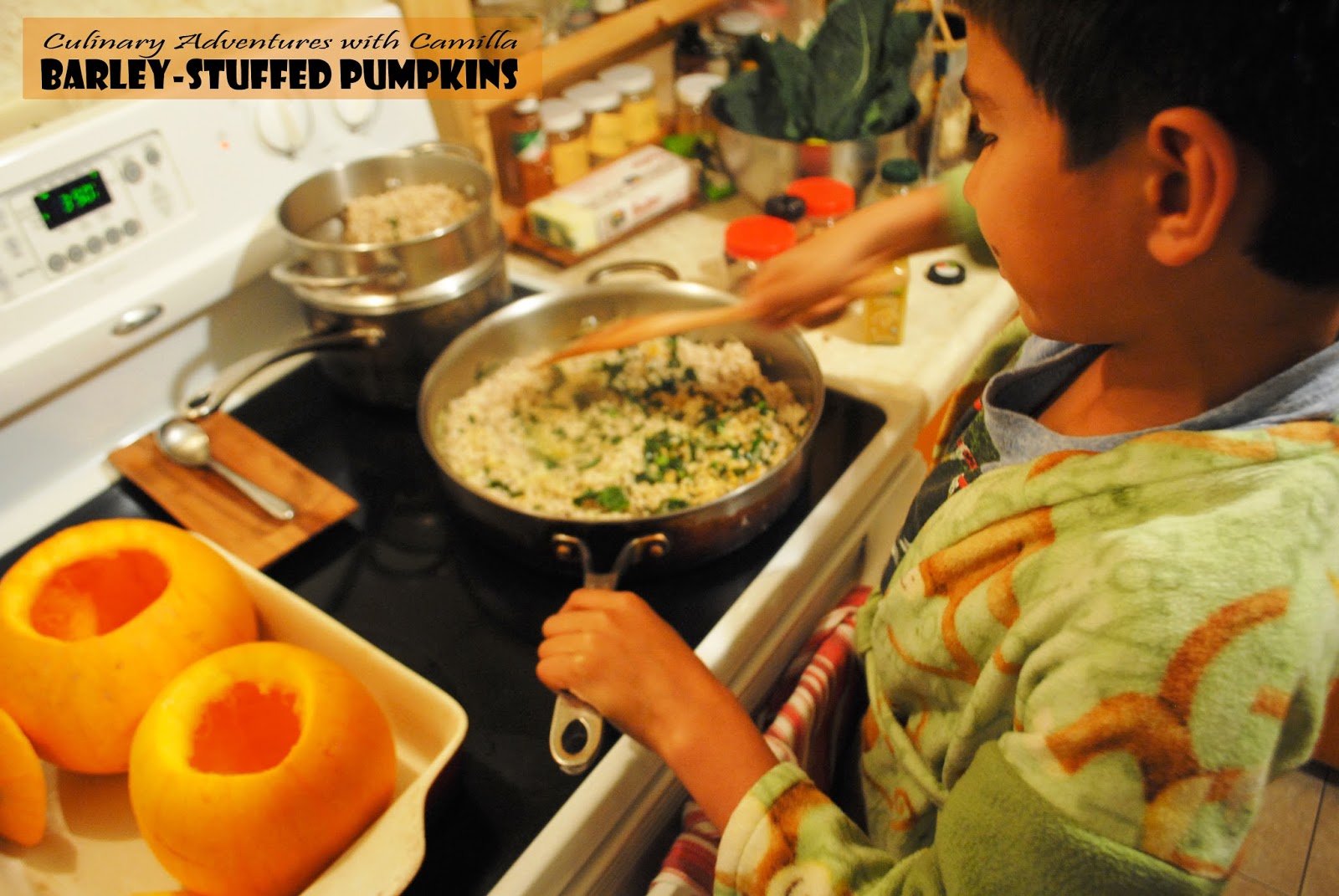 It began with some extra pumpkins from our High Ground Organics CSA. I had ordered them for myself. But D saw them the same day that the request came for his class Thanksgiving feast sign-up.

"I'll bring those...stuffed with barley and kale," he announced, pointing at my pumpkins.

What? You'll bring what?!

"Those pumpkins, Mommy. I'm going to cook them for my class."

I bit my lip, silently bid my visions of pumpkin puree goodbye, and encouraged him, That's a great idea, Wom. I know it will be delicious. I especially appreciated the 'I'm going to cook them' part as we are in the middle of moving.

I had heard him say 'barley-stuffed', but when cooking day arrived I only had Israeli couscous in the cabinet. How do you feel about couscous-stuffed pumpkins with kale?

Silence and a disappointed look.

Israeli couscous is similar in size and texture to barley, I commented.

"Mom, I really want to use barley. Please." At least he's polite in his insistence. So off to the store we went. He also wanted mushrooms...that he would cut small so his friends who don't like mushrooms wouldn't really know. I tossed some shitakes in our cart. 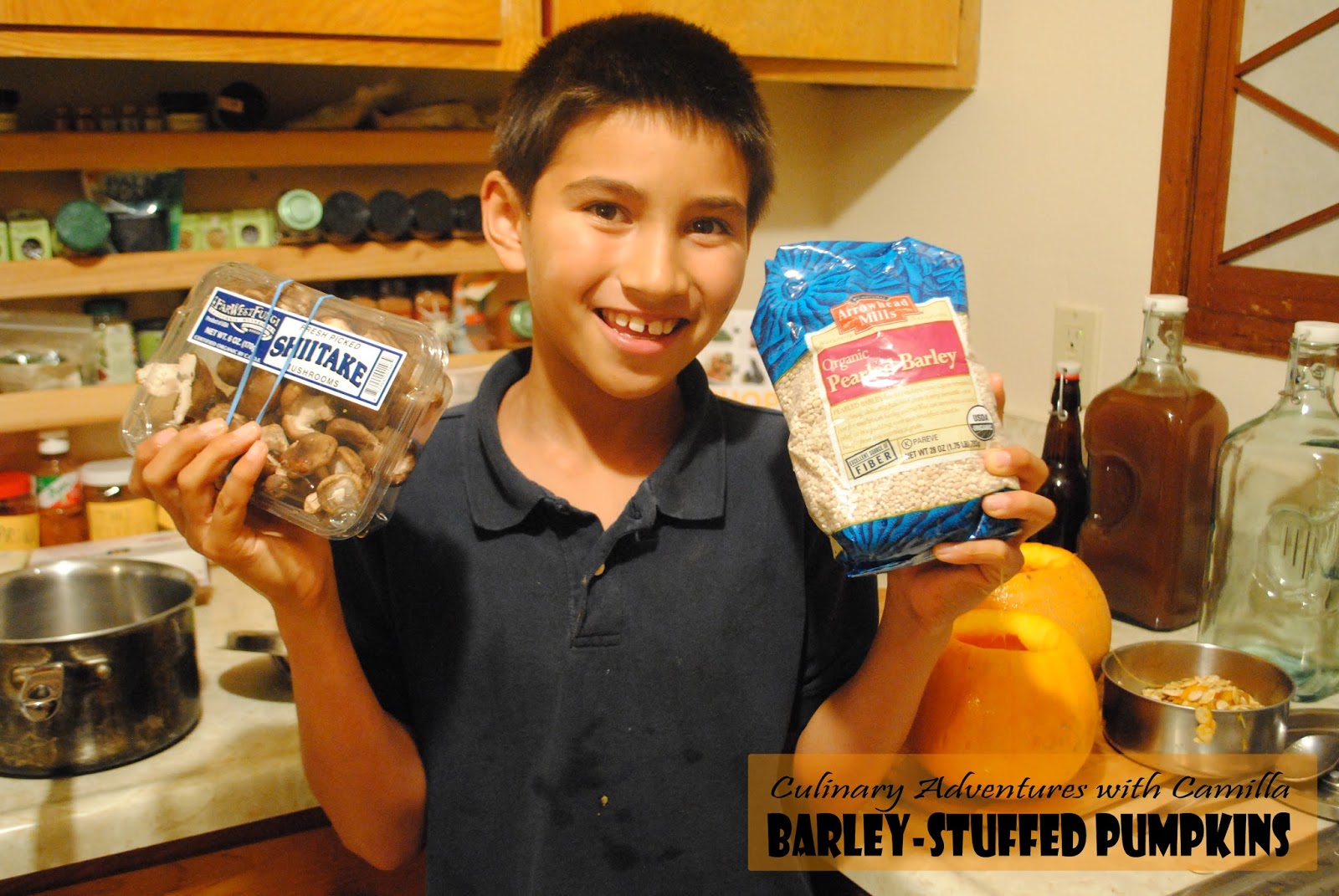 And, true to his word, he got cooking.... He chopped, he chiffonaded, he spiced, he stirred, and he stuffed. 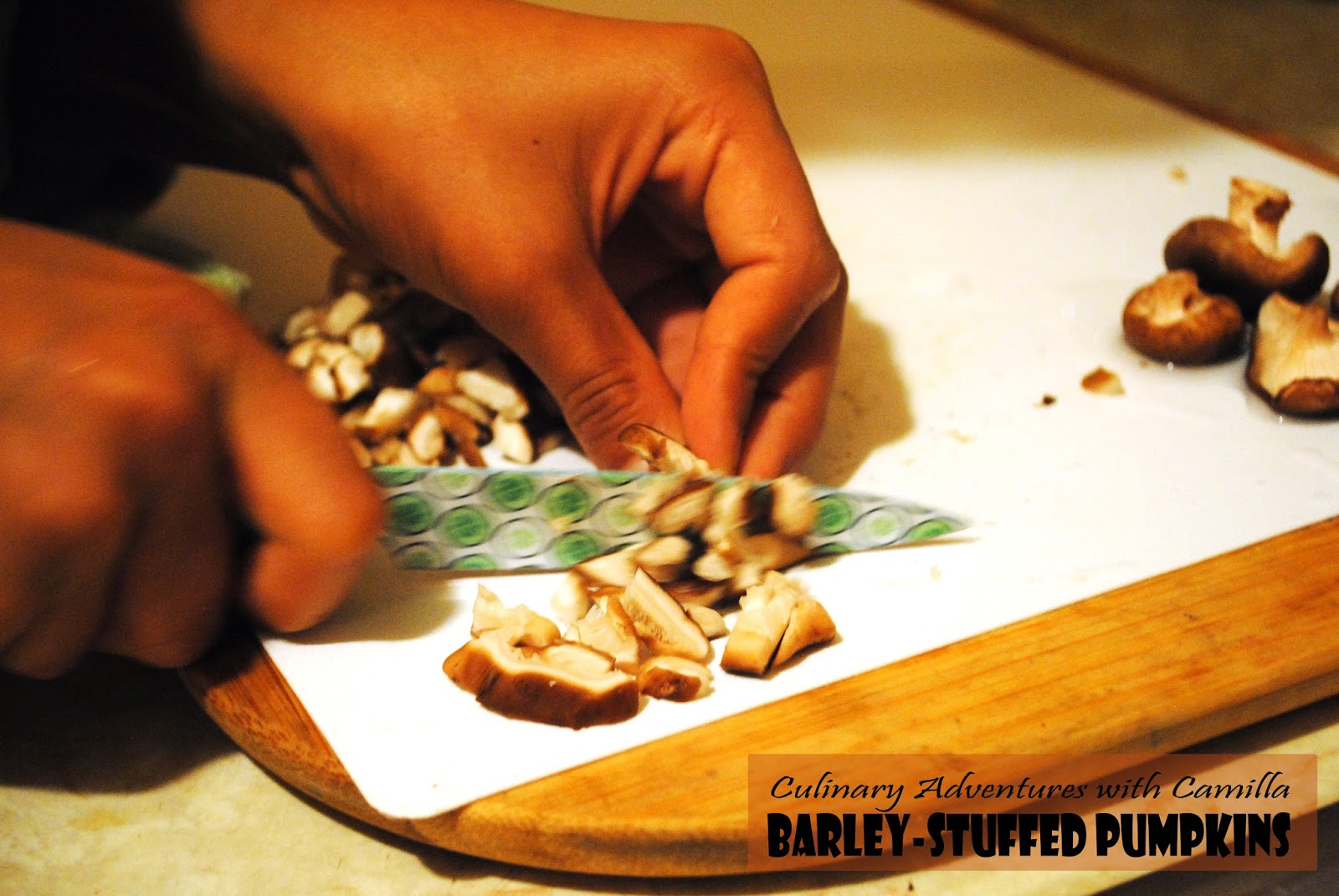 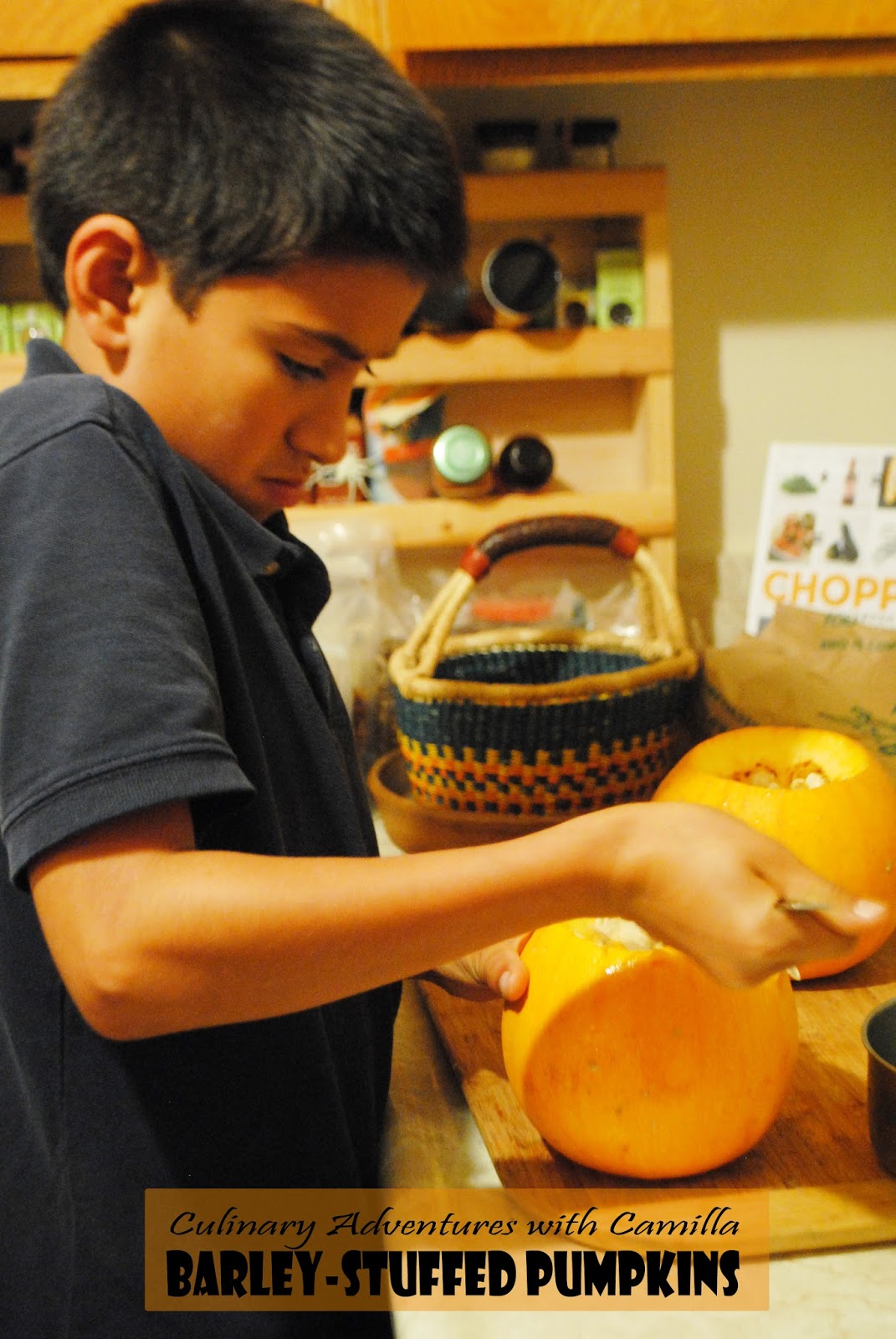 Parboil the barley while you clean out the pumpkins. Drain the barley and set aside the cleaned pumpkins.

In a large, flat-bottom pan, saute the onion, mushrooms, and kale in a splash of olive oil. Cook till the onions are translucent and the kale is softened. Pour in the chicken stock and add the barley to the pan. Cook until the liquid is mostly absorbed. Add more chicken stock, if needed.

Preheat the oven to 350 degrees F. Season to taste with your preferred spices. 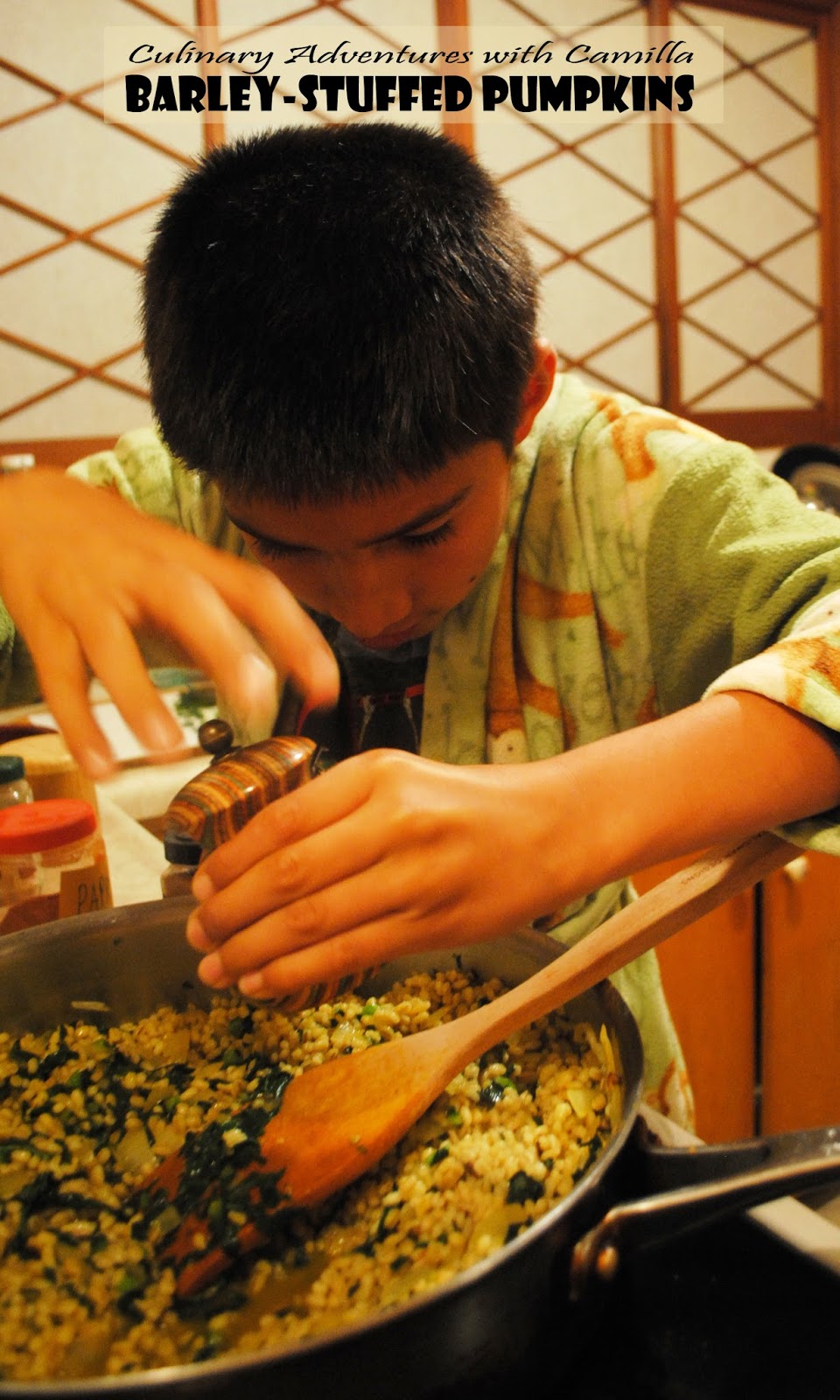 Fill the pumpkins, pressing down on the barley mixture to get rid of air pockets. Cover your pumpkins with their lids. And cover the entire baking dish with foil. 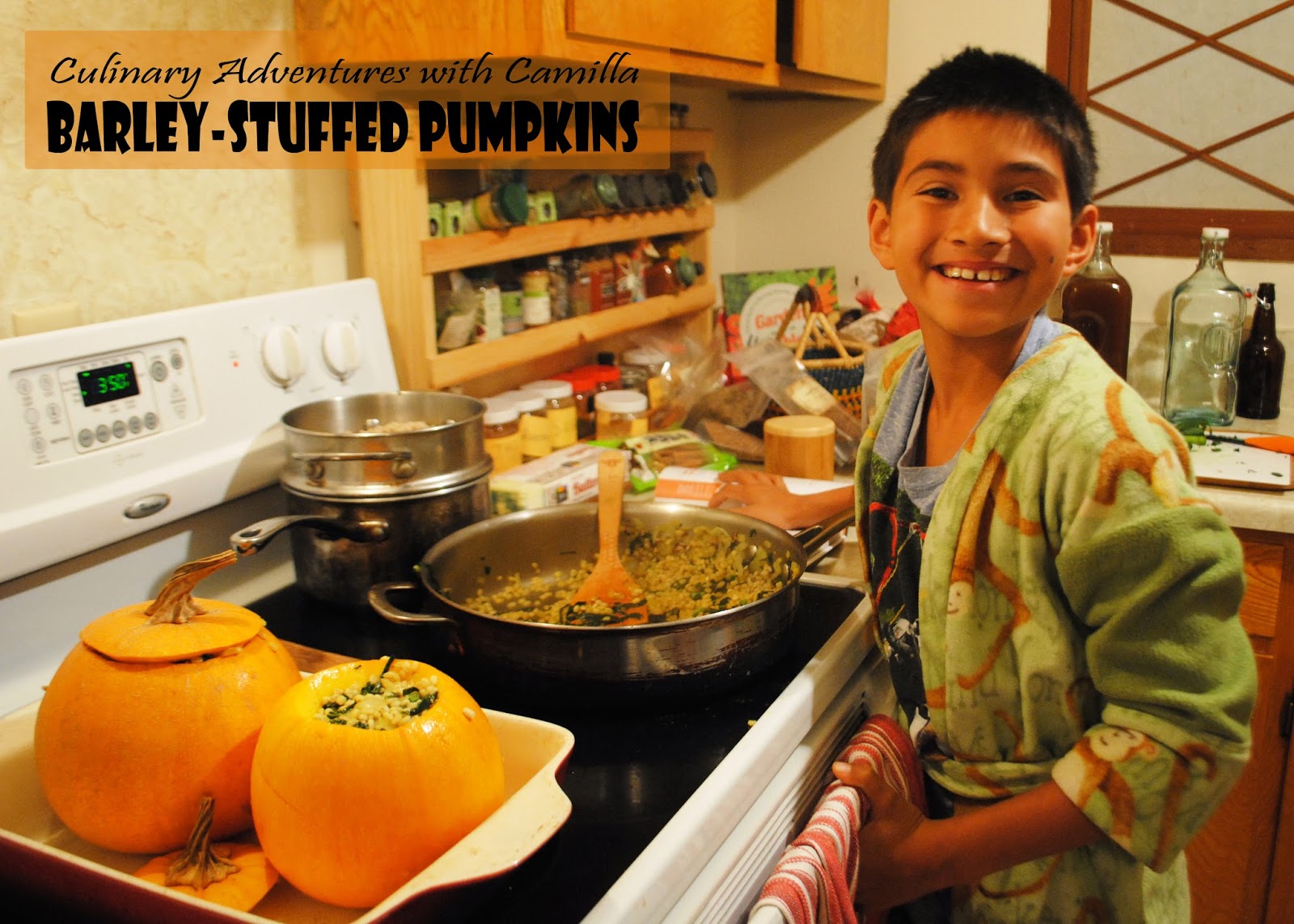 Roast for 60-90 minutes. Squeeze the pumpkin to make sure it's soft. Let cool if not serving immediately. Serve hot, slicing the stuffed pumpkin into wedges.

Here's the Enthusiastic Kitchen Elf with his creation for his class. He left one at home for us to eat for dinner. Creative and generous. I love this kid! 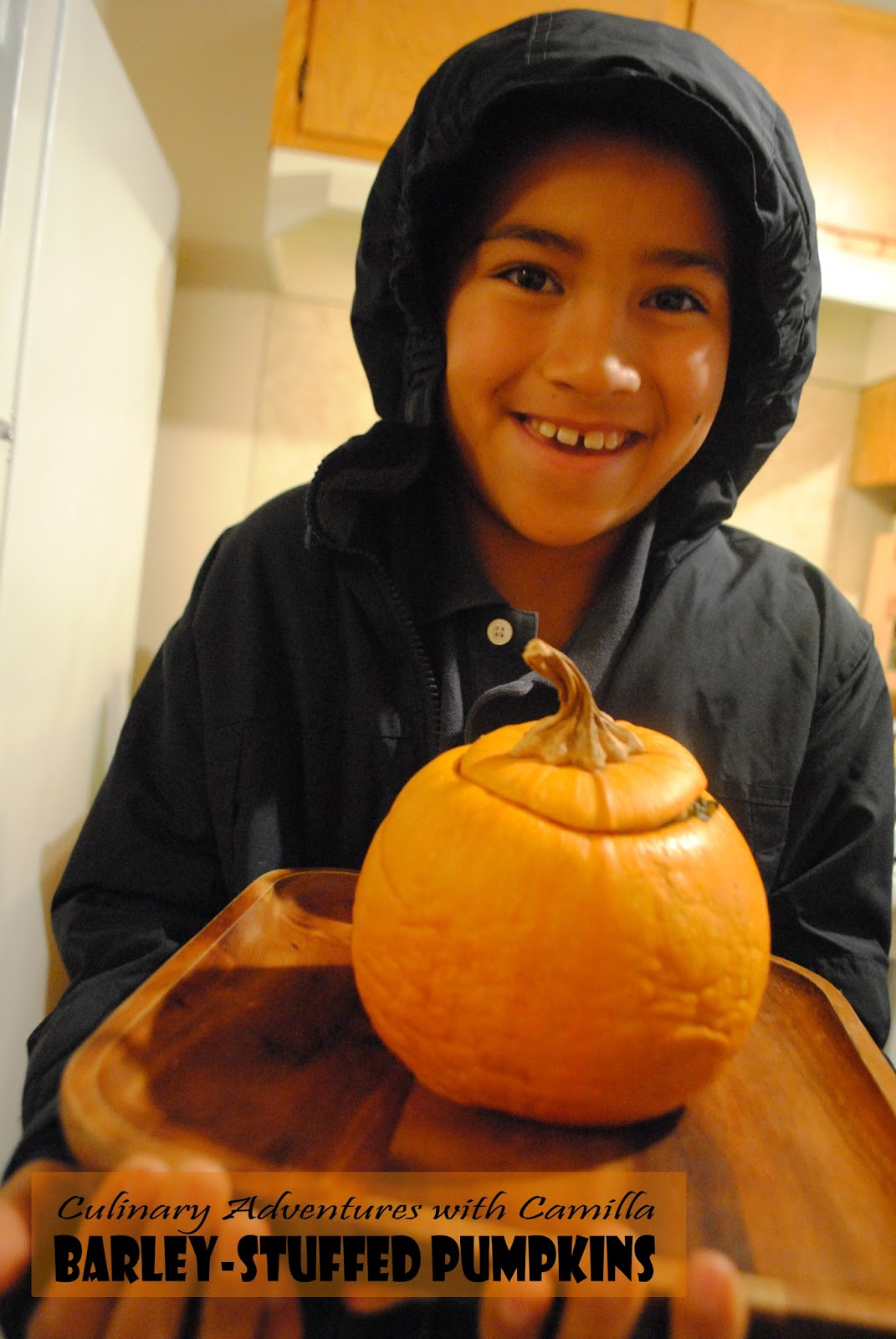 The verdict (on whether or not his friends would enjoy his pumpkin): Well, more of the moms and my teacher ate it than the kids in my class. But it's okay. The adults really liked it! Thank goodness someone ate it. We'll be eating ours for dinner.