It's time for the November Secret Recipe Club reveal. What's the Secret Recipe Club? It's a group organized by Amanda of Amanda's Cookin'. Each month, every participant is assigned to someone else's blog from which they pick a recipe - or two - to make and post, but it's all a secret until the big day. Today's the day. I always love a kitchen challenge and some culinary adventure. And I was determined, this month, to whip up some savories for the reveal.
Meet Kate of Kitchen Trial and Error. There are so many things to admire about her blog, but the one that struck me first: she admits to kitchen flops. Love that! We all have them, why hide them? Her "about" page invites you to stay awhile and read about her messes and successes in the kitchen. I surely did.

It was not difficult to pick some recipes of hers that I wanted to make. What was challenging was narrowing down the list. I ended up making three of her recipes for dinner one night. But here's the list of other recipes I've bookmarked to make at a later date: orange-clementine pudding, Indian butter chicken, and apple-chicken chili.


As the weather began to turn colder this month, I was inspired by her many posts about risotto. Among her risotto recipes are a tomato basil risotto, a portobello risotto, and - uniquely - a sweet risotto made with vanilla, strawberries, and peach. I made my own version of risotto, an asparagus-fennel-leek risotto, and then revamped it with Kate's Risotto-Stuffed Portobello Mushrooms.
While Kate opted for one large mushroom per person, I found smaller stuffing portobellos and served them as an appetizer. 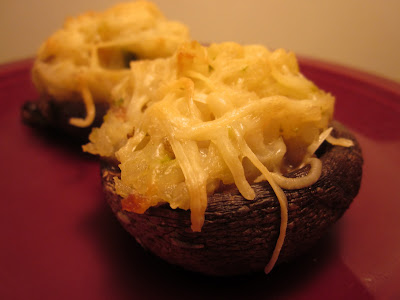 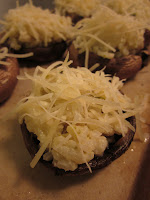 Preheat your oven to 350 degrees and clean the mushrooms. Place the mushrooms on a baking stone, gill side up, and drizzle with olive oil. Season with pink Himalaya salt, freshly ground pepper, and bake about 15 minutes until softened.
When the mushrooms are softened, spoon the risotto into the caps, press gently, and top with cheese. Bake an additional 10 minutes, until the cheese is melted and golden-hued.
Our main dish for the evening was based on Kate's Potato Frittata to which I added some wild mushrooms - to stay with the fungi theme.
POTATO-MUSHROOM FRITTATA 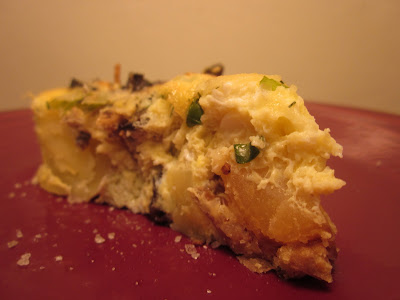 Preheat your oven to 350 degrees. Butter a baking dish and place potatoes in it. Top them with the mushrooms, fresh herbs, and eggs beaten with heavy cream. Season with herbs, salt, pepper, and top with shredded cheese. Cover the pan with aluminum foil and bake for about 30 minutes. Remove the foil and bake an additional 10 minutes. Slice into wedges and serve.
And, instead of dessert, we ended dinner with a fresh salad of mixed greens, roasted beets, and crisp apple slices...topped with some croutons inspired by Kate's Crunchy Croutons. 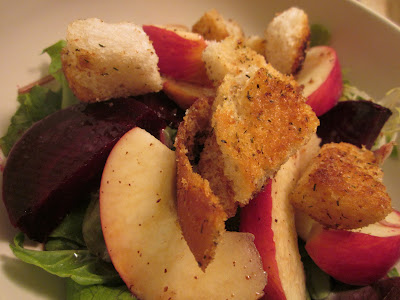 Preheat your oven to 350 degrees. Cube your bread, about half an inch to an inch square, depending on how big you like your croutons.


Lay the bread on a baking sheet and drizzle generously with olive oil. Season with salt, pepper, and herbs and toss to coat. Spread the cubes out on a single layer. Bake about 20 minutes, or until the bread is perfectly toasted to your liking.
Thanks so much, Kate, for the culinary inspirations. I am so glad to have tried and succeeded in the kitchen with you. I'll be stopping back by to make some more of your treats later this month.