By Camilla M. Mann November 11, 2011
True to my non-conforming roots, I usually cook something a little bit different for Thanksgiving. Last year I opted for a Native American feast, researching traditional recipes from different tribes. Here's what I made... 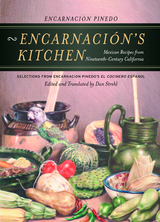 This year, since Riley - along with every other fourth graders in the state - is studying California history, I decided to create a menu based on Spanish colonial foods. I'm starting with a copy of Encarnacion's Kitchen: Mexican Recipes from Nineteenth-Centry California that I picked up yesterday at the Cooper-Molera Adobe.
I haven't quite decided on the menu; I'll keep you posted. But Riley agreed to embroider something on the placecards. This is gonna be fun!