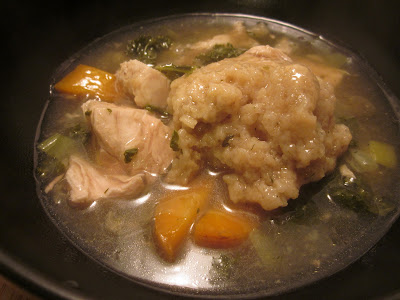 When my boys are sick, I try make whatever they want for dinner. Tonight the request: chicken and dumplings. Well, I'd never made that, but that's never stopped me before. So here goes...I started with a hearty chicken stew, then steamed dumplings on top.

I lightly browned boneless, skinless chicken breasts in a splash of olive oil - just enough to cook the outside. Then I added 8 smashed cloves of garlic, 1 sliced leek, 2 sliced carrots, and 2 C of thinly sliced kale. I seasoned the pot with oregano, dill, and smoked sea salt. I covered all of that with 8 C of chicken broth, brought it to a boil, and simmered it for one hour. After that, I sliced up the chicken breasts, returned it to the broth, and thickened the broth with some cornstarch. In the meantime, I made the dumplings.

I scooped rounded tablespoons of the dough and dropped them into the boiling soup. I immediately covered the pot - to let the dumplings steam - and reduced the pot to a simmer. I simmered for 15 minutes, till the dumplings had plumped up and were cooked through. Success!