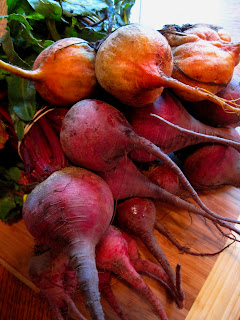 Last time I served beets to a good friend, he asked, "Are you mad at me? Why are you feeding me purple dirt circles?!?" And since one of my missions in life is to expand people's palates, especially in regards to fresh fruits and vegetables, I figured that I would build an entire menu around those purple dirt circles and prove to him how tasty they really are.  First thing he'll note is that all beets aren't purple.  I hit the farmers' market and bought lots and lots of beets.  Red beets, golden beets and - my visual favorite - chioggia beets which are striped red and white like peppermint candies.  After my Ode to an Aubergine dinner, he liked eggplant; we'll see what he says about purple dirt circles tomorrow night.
I cleaned and roasted a dozen beets tonight as the basis of several recipes.  I scrubbed and trimmed the beets, then rolled them in olive oil and sprinkled them with pink Himalaya salt.  Then I roasted them in a 350 degree oven till they were fork-tender.  It took about an hour. 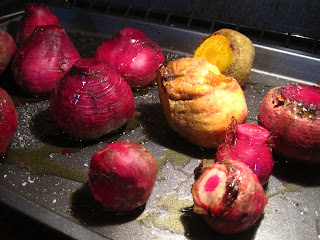 Now I'm ready to get cooking!