By Camilla M. Mann March 31, 2011
If you've been following me for awhile, you know that I'm attracted to the odd and unusual.  If I see something on a menu that I've never tried, I'll order it.  When I travel, my eye automatically falls on the strangest shaped fruit at the fruit stand. "What is that?" is typcially followed quickly by "I'll take two. Thank you." Apparently, that habit has rubbed off on my kids.

When we were visiting the Hilmar Cheese Company, Riley danced up to me with a jar.  The fruit inside was pouch-shaped, a dull orange, and suspended in liquid. Though I don't often buy fruit in a jar, I was intrigued. "Mom, look, I found a new kind of fruit. Have you ever tried this?" I peered at what he was holding: Chilean Carica. 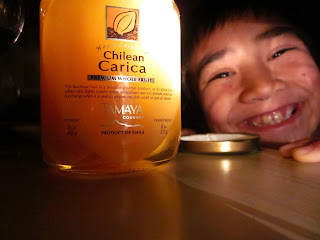 "Of course."  So, I happily forked over some cash and let him buy it.  Later that evening, we opened the jar, drained off some of the liquid, and sliced it up. Chilean Carica (Caricacea Pubescens) is a rare fruit from a semi desert area in the North of Chile, called Limarí Valley.  It is also known as the Chilean Papaya, Golden Papaya and Chilean Mountain Papaya.

Reminiscent of jackfruit, but not as sticky. Mango-like? Now I just need to figure out where I can get some more. It was delightful. I can think of all sorts of ways to serve it.