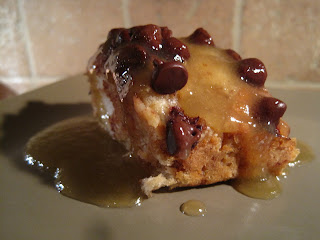 To end our Mardi Gras feast I wanted to make a New Orleans bread pudding with bourbon sauce. But, alas!, when I braved the Dragon Cabin, clinked the bottles around, I only came up with Aquavit (a Scandinavian caraway spirit), Cynar (an Italian artichoke liqueur), Liquore Strega (an Italian saffron liqueur), Amarula (a South African liqueur made from the marula fruit), several bottles of tequila, some brandy, and a bottle of rum.  And I still have a bottle of vodka in the freezer from my Martian Martini Bar.  Hmmm...which, if any, of those would be the most like bourbon?  None are made with corn.

I opted for the brandy, for the mere fact that it was labeled "French brandy."  I figured 'New Orleans' was more closely related to France than any of my other booze options.

In a medium-size saucepan over low heat, melt butter; add sugar and beaten egg, whisking to blend well. Cook, stirring constantly, until mixture thickens. Remove from heat and whisk in brandy to taste; let cool. Whisk and reheat before serving. The sauce should be soft, creamy, and smooth.