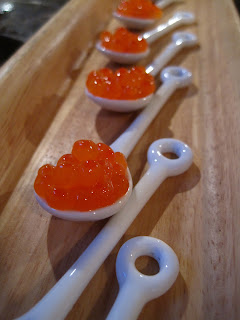 I figured that a super easy amuse-bouche offering would be caviar.  Strictly speaking, though, the term 'caviar' can only be used to refer to unfertilized sturgeon roe, just as 'champagne' can only be used to refer to sparkling wine that actually hails from Champagne, France.  So, I guess it would be more accurate to say that I served salmon roe.  Bright, round orange orbs of salty goodness.

Easiest recipe ever: twist (open the jar) and scoop (onto the spoon)!

There were a few spoons left at the end of the evening.  And when I picked up the boys from the babysitter's house and walked in the door, Dylan bolted straight for the table.  Before I could stop him - or warn him - he popped the spoon in his mouth.

It must not have been what he was expecting because he spat the roe right onto the floor.  I told him it was just a larger version of that the tobiko (flying fish roe) that he likes on the outside of his California rolls.  He disagreed.  Oh, well, it's an acquired taste!  More for me.