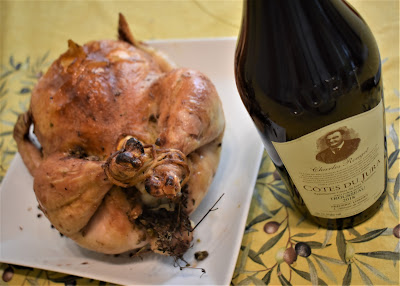 Payal of Keep the Peas is hosting the French Winophiles this month as we explore the wines of the Jura region. You can read her invitation here.
If you are reading this early enough, feel free to join us for a Twitter chat. We'll be live on Saturday, August 21, at 8am Pacific time. Follow the #Winophiles hashtag and be sure to add it to anything you tweet so we can see it. Here's the group's offerings...
To the Region
Just to set the scene on the Jura. It is located in Eastern France, lying approximately 50 miles east of Burgundy on the Swiss border. Its soil is predominantly limestone from the Jurassic period with a higher percentage of clay in the northern part of the region, especially around Arbois.
The Six AOCs (Appellation d'Origine Contrôlée) and Year Granted 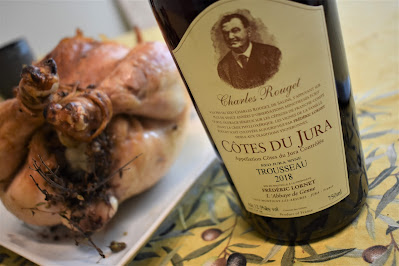 Domaine Frédéric Lornet is a wine producer who owns and operates the Abbaye de la Boutière, a thirteenth century Cistercian abbey, in Montigny-lès-Arsures, a small village just outside Arbois in the Jura region of France, specifically in the Côtes du Jura AOC. The domaine began with Frédéric's grandfather, Eugene, who was a cooper and a grape grower. Eugene's son Roger was one of the first in the region to bottle the Arbois wines. Frédéric continues in the family tradition of grape growing and wine making.
I have poured a Trousseau Gris before - you can read about that in my post Ground Turkey and Sautéed Mizuna with Sesame Noodles + Two Shepherds 2018 Skin Fermented Trousseau Gris - and was excited to find a Trousseau as a single varietal. Indigenous to the Jura region of France, Trousseau is related to Chenin Blanc, Sauvignon Blanc, and Savagnin. Though the story is unclear it appears that the Trousseau grapes made its way across France and landed in Portugal where it is called Bastardo where it is permitted in the production of Port. It also goes by the names: Maturana Tinta, Merenzao and Verdejo Negro. 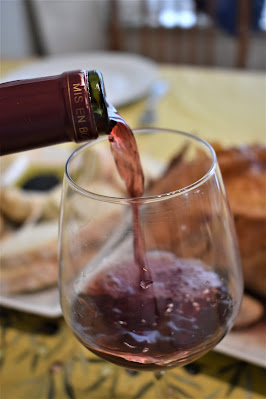 The wine pours a pale, translucent ruby color. On the nose it had aromas of raspberries with a tinge of black pepper. On the palate the wine had a medium body with a lingering finish.
Poulet Rôti 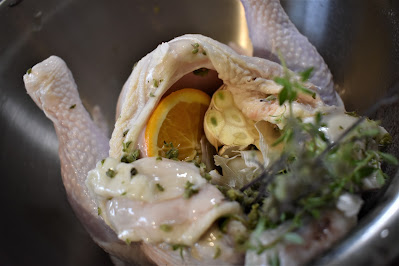 I knew that its savory notes would pair well with protein, but wanted a lighter meat than beef or pork. So  paired it with a French-style roasted chicken. This is on my table at least once a week because it's so easy...and I usually get three meals from it. I vary the stuffing and flavors based on what I have on-hand.
Ingredients 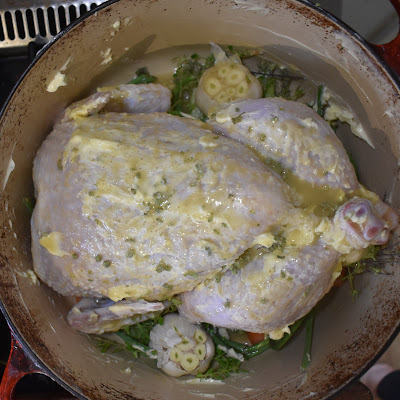 Preheat oven to 425 degrees Fahrenheit. Place sliced carrots and celery in the bottom of your roasting pan or Dutch oven to create a "rack" of sorts.
Stuff the chicken cavity with halved citrus and onion or garlic. Wedge the bunch of herbs side, then truss the chicken with 100% cotton twine and place it on top of the carrot-celery rack.

Rub the chicken with the softened butter. Sprinkle with salt and pepper and freshly chopped herbs. Nestle the halves of the garlic around the chicken. Drizzle the olive oil and wine over the chicken. 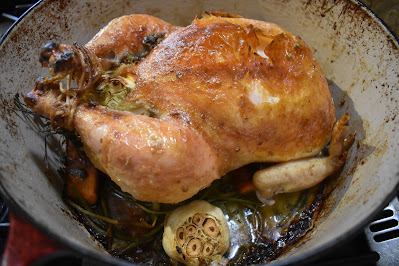 Let the roasted chicken rest for 10 to 15 minutes before carving. Serve with a crisp green salad and a nice glass of wine.
That's a wrap for the #Winophiles Jura event. We'll be back next month as Wendy of A Day in the Life on the Farm leads the group in a discussion about the wines of the Côtes du Rhône. And some of us received samples of Côtes du Rhône wines from Teuwen Communications. So grateful!