The Horror of Jell-O, a Berry Galette, and the Start of a Series #FoodieReads 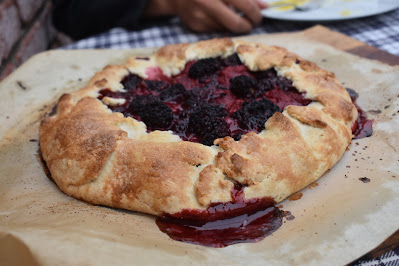 I don't really know how this book ended up in my list. Well, it's not that much of a mystery really. It's set in Europe; it involves lots and lots of good food...with an eye to making fun of North American cuisine. That's pretty much my schtick, right?
But I breezed through My Grape Year by Laura Bradbury,* the first in a series, and then promptly read the next five books! I'm in the middle of the sixth book now. That was one good thing about being sick with a rotten cold for the past few week: I did a lot of reading. 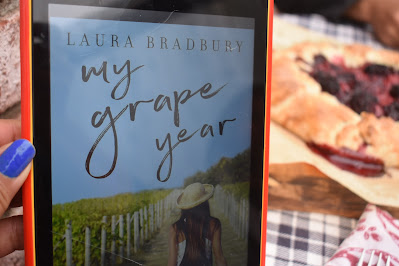 This is Laura's telling of her year in France. As a seventeen-year-old Laura lands in Burgundy as an exchange student with a planned stay at four different host families' homes. She has a few 'goals': frequent French cafés, drink French wine, fall in love, and learn to speak French. Her exchange agency has a few rules that are in direct conflict with that: no driving, no drinking, and no dating. Hmmm...
The narrative is rife with fun, learning, French friends and frenemies, and - yes! - romance. Laura's prose is vivid and the reader is drawn into her world. You actually feel as if you're there with her, experiencing all of her joy, angst, impatience, and more.
As when she first tries pâté, it is a culinary awakening. "I sunk my teeth into the pâté on baguette. The bread was like a soft pillow under my teeth and the pâté was like silk against my tongue. It had a salty, savory taste that was perfectly balanced and deeply satisfying. I let out an involuntary sound of satisfaction. 'You like?' Julien asked me. He looked cool and collected as usual…not the type to groan at the table by accident. I nodded. He pushed forward a little ceramic bowl filled with what looked like mini gherkins. 'Try it with cornichons.' I picked a few and took a bite of the crisp, vinegary mini pickle. Then I took another bite of the pâté on baguette and a sip of the crisp, cool white wine. Why weren’t the clouds parting and an angelic chorus singing? The flavors, the textures…they were a revelation" (pg. 35).
Or when she celebrates Christmas with her host family, you long to join the festivities. "We had a proper French Christmas meal—foie gras and sauternes wine, a roasted goose with the most delectable stuffing made of chestnuts, an enormous cheese platter, bûche de Noël—which was a massive improvement on the dried fruit-filled fruitcake and plum pudding at home that I had always despised—clementine oranges, and brightly wrapped individual chocolates called papillotes with the café. All of that was washed down by Henri’s fine wine purchased during our bicycle wine-tasting excursion to Vosne-Romanée in the fall" (pg. 156).
The Horror of Jell-O 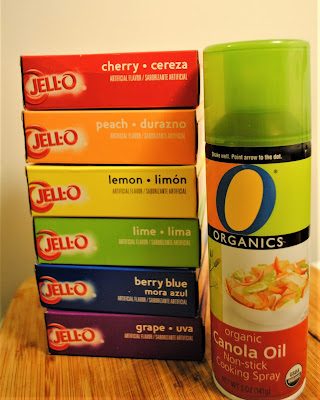 But, probably, one of my favorite sentences in the entire book: "Do not make Jell-O for French people under any circumstances" (pg. 314).

Over lunch one day, I was explaining the circumstances of Laura preparing grape Jell-O for her Burgundian boyfriend's family. I had to chuckle at D's reaction: "Just don't make Jell-O ever. How about that?!" Years ago my niece requested a Jell-O rainbow when we went to visit her in the hospital after one of her many surgeries. I made this...and, I think, it was one of the first times the boys had ever had Jell-O. They weren't impressed. 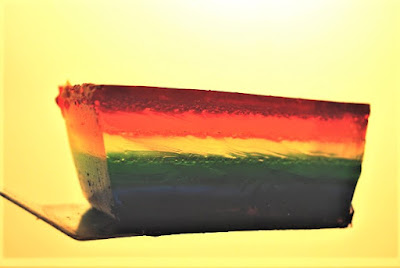 Through the book, we see Laura recognize the differences in the way the French sees food and how she was raised. She comments about cheese, "There was nothing on the platter that resembled the rubbery blocks of cheddar or mozzarella we found at our local grocery store. There was a large Camembert or Brie, and a crumbly wedge of pale yellow cheese with a thick brown crust, and one that had little pockets of what looked like mold—I’d be avoiding that one. There was also an orange cheese with a pungent smell, which bulged out softly without being runny exactly, and four more that looked equally" (pg. 21).
And this exchange shows it succinctly. "'What would you call food that doesn’t taste good?' I asked instead. I thought of boiled cauliflower, diet health shakes, low-fat yogurt, skim milk… Julien frowned at me. 'Why would you eat anything that didn’t taste good?' he said. 'The whole point of food and wine is pleasure. It has to be 'bon,' otherwise, what’s the point?'" (pg. 36). 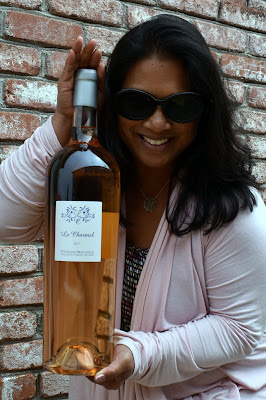 At one of her events, she describes an enormous bottle of wine and I was reminded of this jeroboam (pictured above). This is half the size of Laura's methuselah. "I had just begun to wonder where Thibaut’s father was in all these preparations, when he appeared through the doorway bearing the biggest bottle of wine I had ever seen. 'What the hell is that?' I asked Maxime, who was sitting with me and Sandrine and a few of our other friends. 'Haven’t you ever seen one of those before?' 'No! It’s like…it’s like a wine bottle for giants!' 'It’s called a methuselah. It’s the equivalent of eight bottles of wine. They’re often served here in Burgundy for special occasions. Baptisms, birthdays, weddings—' 'Funerals?' 'Non. But they might as well be because there is always a lot of wine at those too'" (pg. 189).
But, for this post, I wanted to share a berry galette that I think Franck's grandmother, Mème, would make.
Ingredients makes one 10-inch galette 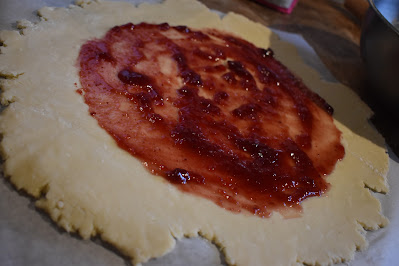 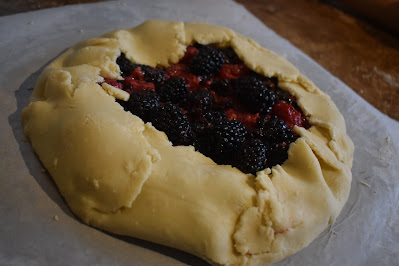 Crust
Place flour, ground almonds, sugar, and butter in the bowl of a food processor. Pulse until large crumbs form. Add liquid 1 Tablespoon at a time, until mixture just begins to clump together. If you squeeze some of the crumbly dough and it holds together, it's ready. If the dough doesn't hold together, add a little more liquid and pulse again. Note that too much water will make the crust tough. Once the dough comes together into a ball, wrap tightly in plastic wrap and refrigerate for at least 30 minutes before using.
Roll out the Pâte Brisée between two pieces of parchment paper and place the crust on a parchment paper or silicone mat-lined baking sheet. Preheat the oven to 425 degrees F.ahrenheit. Toss the berries with sugar and flour until fully coated.
Spoon jam or jelly into the center of the dough and spread into a circle, leaving about a 2-inch border. Heap the berries over the jam and spread to the edge of the circle. Drizzle melted butter over the berries and gently pull the edges of the galette up and over the top of the berries to form a rim.
Brush the exposed crust with heavy cream and gake the galette for 45 to 50 minutes. The crust will be slightly browned and crisp to the touch. 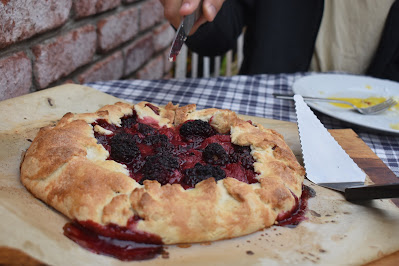 Let cool for a few minutes before slicing and serving. 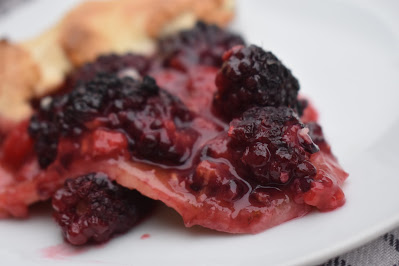 Click to see what everyone else read in August 2021: here.