I haven't been very good at participating every month, but as this is the final installment, I knew I had to jump in.  Sarah shared: "I begin my Masters program in February and need to try and give it my undivided attention and decided that February's Red Velvet Food Fight will be the final food fight. I feel like we just started but we've been food fighting since November 2016. Isn't that crazy?! Thank you all for joining in and sharing recipes each month! It has been such a fun journey!"

So, I started planning, even though Red Velvet is sort of my Moby Dick. Let me explain. But first, here's the #FantasticalFoodFight final line-up...

You are invited to the Inlinkz link party!
Click here to enter 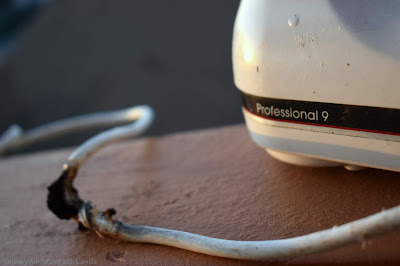 Here's the story of the Pale, Pale, Pale Red Velvet Layer Cake That Almost Wasn't. Do you ever get the sense that the kitchen gods and goddesses are telling you to just give up? Well, I was getting the message loud and clear...except that this was meant to be my final post for the Fantastical Food Fight. So, come hell or high water, I was making - and posting - a darn red velvet cake. Or was I!??

When I refer to Red Velvet as my 'Moby Dick, it's because success with that cake has eluded me for years; I have never successfully made a red velvet cake. Never. Not once. Mainly because I refuse to use a bottle of  (chemical) food dye that appears in many recipes. Use beet puree, they said. Tried that and it made a pink-tinged cake. Tasty, but not red. Use alkalized cocoa powder with vinegar, someone else suggested. That didn't work...the cake was as brown as could be. Not even a hint of red.

I decided to wave the white flag and use food dye for this cake. But I wanted to use natural food dye and that is always a little problematic or really just unpredictable. Last week was Valentines' and, in preparation for that, I made some Iced Sugar Cookie Hearts. Look! Just a few drops of red dye made with beets and they were a bright pink. 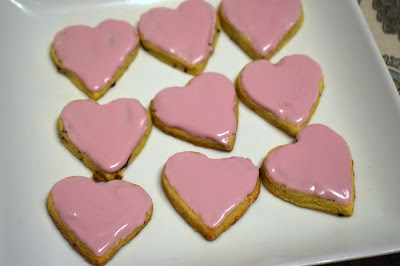 Then I left the bottle on the counter and the sun hit it all day. I told you it was made with beets, right? The next day I used the exact same bottle of dye for a cookie encore and it had turned purple! They were still pretty, but they weren't pink. 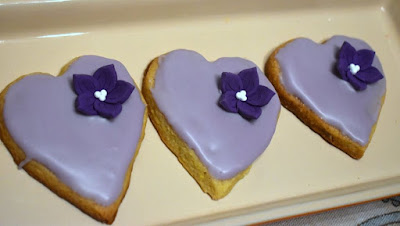 I read an article about how Red Velvet is a cake from the 1950s that is moist and mildly chocolatey. So I decided to go with that. So, I bought a new natural red dye for this project! And, in the batter, it seemed red. Red enough anyway. But I was foiled... 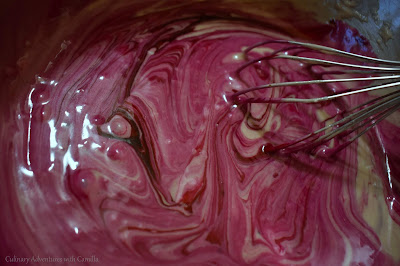 When my cake faded to a pale pink, I thought that the heat from the baking process was to blame. I opted to dye the cream cheese frosting red instead! 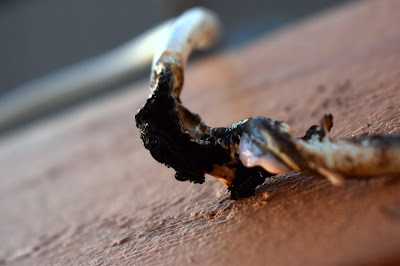 You can call it 'pink'! I think I've finally accepted that, as my Precise Kitchen Elf explained to me, "Red Velvet isn't your thing." 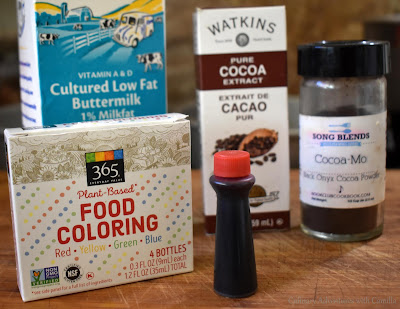 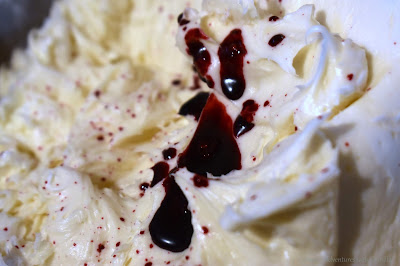 Cake
Let all of your cold ingredients from to room temperature. Preheat oven to 350 degrees F and line two 9" cake pans with parchment paper.

In a medium mixing bowl, whisk together eggs, oil, buttermilk, vinegar, melted butter, and cocoa extract. Fold in the flour, sugar, cocoa powder, and baking soda and whisk until just combined. Stir in the food dye.

Divide batter between the two prepared cake pans and bake for about 38 to 40 minutes. Let the cakes cool in the pans for five minutes before inverting. Let cool on a wire rack completely before frosting.

Frosting
Place softened butter and cream cheese into a large mixing bowl and beat on low until completely smooth. Add in the cocoa extract and the powdered sugar. Add sugar 1 C at a time until fully incorporated and without lumps.

Add food dye until desired color...or until your hand mixer cord sets on fire and you can't use it anymore! No, that's just a note to myself. I hope that doesn't happen to you. 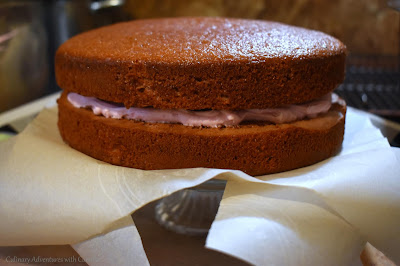 Place one cake layers on your serving platter and scoop a generous layer of frosting on the top. Smooth to the edges and place the second cake layer on top. 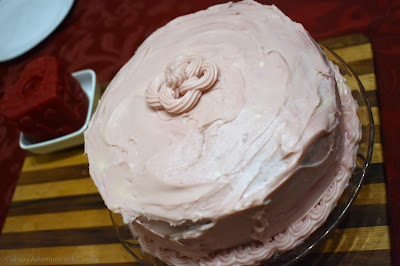 Frost the sides and top, then refrigerate the cake so the frosting will set. Remove from the fridge about an hour before you plan to serve. 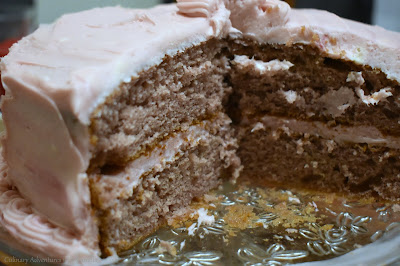 There you have it. My Pale, Pale, Pale Red Velvet Layer Cake That Almost Wasn't. "More chocolate next time, Mom," suggested one. I doubt she's ever going to make Red Velvet again, observed the other. We'll see.

This certainly didn't turn out as I had planned, but I couldn't let the final Fantastical Food Fight go without attempting a cake. Thanks for all the fun, Sarah, and good luck with your Masters program!