By Camilla M. Mann February 29, 2020
This is a sponsored post written by me on behalf of Melissa's Produce.
I received complimentary product for the purpose of review and recipe development,
but all opinions are honest and they are my own. This page may contain affiliate links. 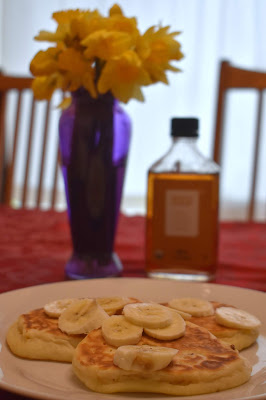 Can you believe that February is already over? And we even had a bonus day in February. But with the advent of March, I begin to see the steady parade towards the Vernal Equinox and Spring which is my favorite season.

Last week I noticed that Melissa's Produce* shared a photo of yellow dragonfruit on one of their social media channels. So, I reached out to my contacts at Melissa's Produce to see if they would want to sponsor a series of posts. I had my eyes on making some Spring-y, sunny dishes. And they did! I received a selection of yellow produce and set out to make some #SpringOnThePlate recipes.

Because the finger bananas were perfectly ripe when they arrived, I knew that they would be pushed over the edge in the next day or two, so I started with them. A couple of years ago I read Banana: The Fate of the Fruit that Changed the World by Dan Koeppel and was inspired to make a Cavendish Cream Pie. I considered making another batch of Deconstructed Banana Mousse Pies and the boys always vote for Flambéed Bananas, if they are given their druthers.

But they were headed out for a full day of robotics and I didn't have enough time to make the Cannelés I had originally planned, so I decided to make banana pancakes. If you've been following me for awhile, you'll know that I am pancake-challenged. I can make beautiful crêpes. My Dutch oven pancakes are dreamy. But try to make fluffy buttermilk pancakes and they are a flop. Then I created a recipe that makes pancakes that aren't unintentionally flat: ricotta pancakes! And I kept experimenting with regular pancakes. I finally have it...and I don't even have to be at elevation to keep them fluffy. Phew.

And a quick note on 'finger bananas', they are a smaller version of the Cavendish; you can read more about finger bananas the Melissa's Produce website here. After this, I did have a few more bananas left, so you might be seeing another finger banana recipe soon. 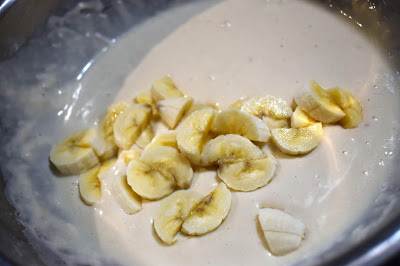 Procedure
In a medium mixing bowl, whisk together the milk, buttermilk, egg, oil, and sugar. Sift in the flour and baking powder. Stir until just moistened. Then fold in the sliced bananas.

Heat a griddle or frying pan over medium heat. Melt butter to coat the pan. Pour or scoop the batter onto the griddle, using approximately 1/3 C for each pancake. Brown on both sides and serve hot. 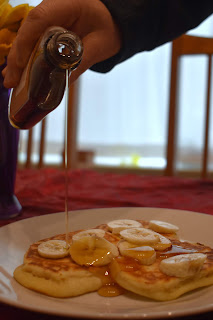 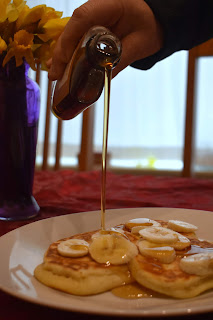 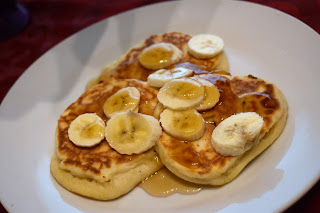