By Camilla M. Mann February 07, 2020
This is a sponsored post written by me in conjunction with the February #WinePW Savoie event.
Wine samples were provided for this post and this page may contain affiliate links. 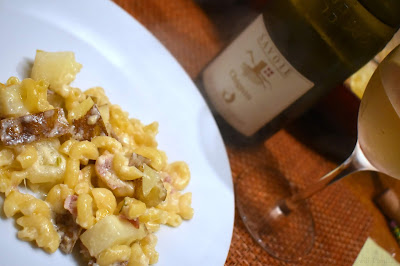 This month the Wine Pairing Weekend bloggers will be taking a virtual trip to Savoie. Here's the invitation from host Jill - from L'Occasion: read it.

If you're reading this early enough, feel free to join the live Twitter chat on Saturday, February 8th, at 8am Pacific time. Follow the hashtags #WinePW and #vindesavoie...and be sure to use those in your own tweets, so we can see your comments. In the meantime, here are the post that will be going live between Friday, February 7th and Saturday, February 8th... 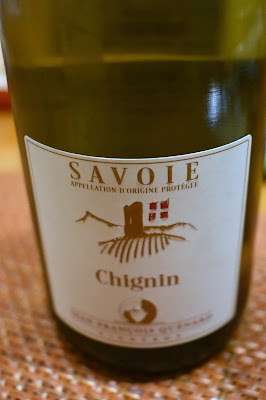 Our group was lucky enough to get some wine samples from the region as well.* Merci beaucoup, Vin de Savoie.


You might be asking yourself, "Where is Savoie exactly?" Savoie is a wine region in eastern France with four sub-regions of Savoie, Haute-Savoie, Isère, and Ain. It is bordered by Switzerland to the East, the Jura to the North, and virtually unknown Bugey to the west, across the Rhône River. 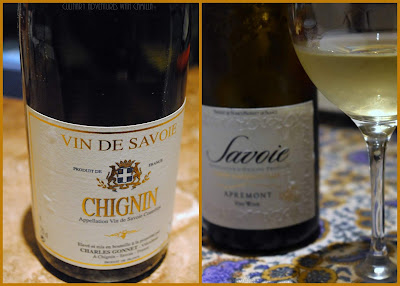 It's a region that I have not explored fully at all. I have paired Domaine Jean Perrier et Fils, Apremont Fleur de Jacquère 2017 with a Tartiflette with Fromage Fort and a Gonnet Chignin with Soupe aux Cailloux for previous events. So, I was looking forward to this chance for a deeper dive into the area.

From my reading, this area is dominated by white wine varietals though I did have a chance to pair a Mondeuse from Savoie that I'll be sharing next week for the February #Winophiles' look at indigenous or godforsaken French grapes. Stay tuned for that!

The predominant white wine grapes of the area are Jacquère - which makes up about half of the vineyards in the region, Altesse, Roussanne, Chasselas, and Gringet. The most known red wine varietals are Mondeuse and Persan though Gamay, Pinot Noir, Douce Noire, Cabernet Franc, Cabernet Sauvignon, Merlot, Joubertin, and Poulsard also make appearances.

What I found particularly interesting was the composition of the vineyard soils in the region. It seems to be a veritable patchwork of soils from when the Alps emerged during the Cretaceous and Jurassic periods. You'll find glacial deposits and alluvial soils in addition to river stones, clay, and limestone. Also intriguing to me was how long the area has been inhabited and used for grape cultivation. The Celtic Allobroges lived in the area and were cultivating the ancient vine Vitis allobrogica long before the Romans conquered.

Now on to my specific bottle for the day: 2018 JP & JF Quenard Vin de Savoie Chignin. Michel Quenard farms twenty-two hectares on the steep slopes of the Coteau de Torméry around Chignin where his grandfather started the domaine in the 1930s. The elder Quenard sold most of his wine off in bulk and it wasn't until the 1960s that Michel's father, André, began bottling under their own label. Michel joined the business in the 1970s and currently runs the domaine with his own sons,  Guillaume and Romain. So, Domaine Quenard is certainly a family business.

Despite the domaine’s proximity to the Alps, the vineyards, with their southern exposure, enjoy a warm microclimate and have fig and olive trees interspersed with the vines. That's a rarity in such a snowy region! The Quenards cultivate Bergeron, Jacquère, Mondeuse, Altesse, and Pinot Noir grapes. 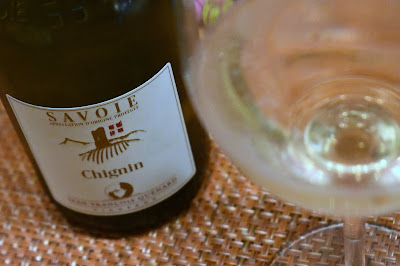 This one is a single varietal, comprised of 100% Jacquère. And at a suggested retail price of only $13.99, it's a steal! To the eye, it was a pale gold hue. On the nose, I got an alluring blend of citrus and stone. On the tongue, the wine was balanced with a persistent minerality that beautifully countered the creamy richness of the dish I paired. 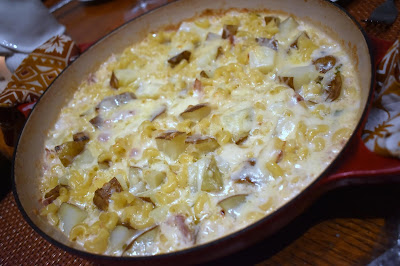 In addition to securing wine samples, Jill of L'occasion also secured a digital review copy of Alpine Cooking: Recipes and Stories from Europe's Grand Mountaintops by Meredith Erickson.* Just released in October 2019, I loved it so much I ordered a hard copy for myself! We were not obligated to make a recipe from the book as a pairing, but I am always game for learning from an expert. Erickson spent the better part of a decade traveling through the Alps. In this volume that's part cookbook and part travelogue, she shares recipes and stories from her alpine galavanting.

Given the two wines I received, I considered making versions of Erickson's Duck Magret with Pont-Neuf Polenta or her Smoked Trout with Cabbage and Beet Tagliatelle because I felt both of those would pair well with the Mondeuse. But, in the end, I opted to pour the 2018 JP & JF Quenard Vin de Savoie Chignin and pair it with my version of Erickson's Älpermakkaronen, Herdsman Macaroni. 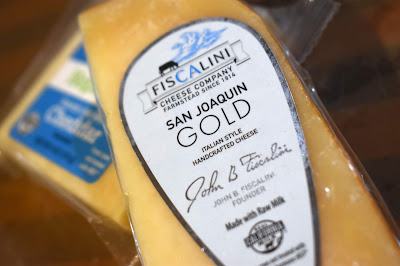 Erickson writes that she has had many iterations of this dish, but her favorite is from Hotel Alpenland in Lauenen. "This is pure mountain food for shepherds and herdsmen: cream, cheese, potatoes, bacon, and shelf-stable dried pasta, complemented by applesauce. It’s basically mac and cheese on steroids—without the sideeffects." She notes that if you can't find Berner Hobelkäse, a hard raw-milk Swiss cheese without holes, you can substitute any aged cow’s-milk cheese, such as réserve Gruyère or Emmental Switzerland Premier Cru. I ended up using an aged cheddar and a raw milk cheese from California's San Joaquin Valley. My boys loved this, calling it "carb on carb goodness...with cheese!" 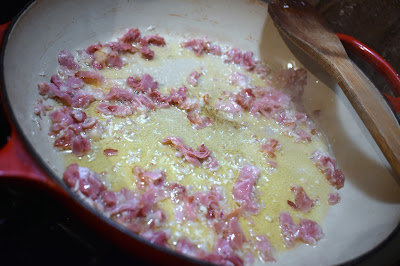 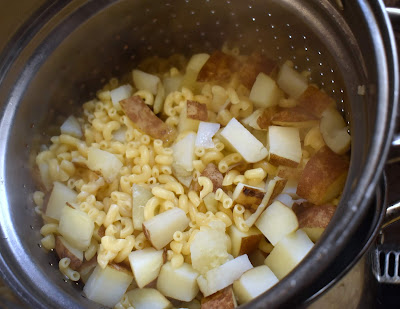 Bring a large pot of salted water to a boil. Add the potatoes and boil for 3 to 4 minutes bfore adding the pasta. Stir in the pasta and cook the two together until the potatoes are fork tender and the pasta is al dente, approximately 7 or 8 minutes. Drain and set aside.

In a large sauté pan over medium heat, melt the butter. Stir in the bacon and onions. Cook until the onions become softened and translucent and the bacon has rendered its fat, approximately 7 to 8 minutes. 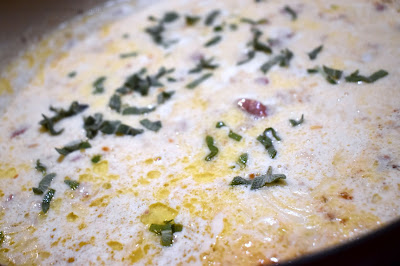 Deglaze the pan with the white wine. Raise the heat to high and simmer the wine until slightly reduced, approximately 1 to 2 minutes.


Pour in the broth and cream and fold in your herbs. Add in the potatoes and pasta. Bring to a boil, then reduce the heat and simmer until almost all of the liquid has been absorbed, approximately 10 to 12 minutes. Season with salt and pepper. During this last step on the stovetop, preheat the oven to 450 degrees F.

Sprinkle the grated cheese over the top and place in the preheated oven. Let the cheese melt and start to brown, approximately 2 to 3 minutes. 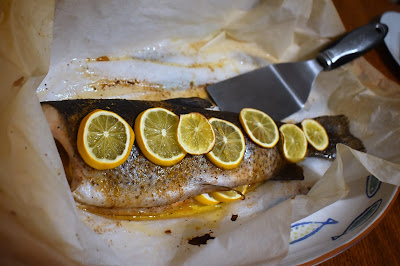 Serve hot with applesauce on the side. I served this with some oven-roasted trout and a crisp green salad.

That's a wrap for the Wine Pairing Weekend's Savoie exploration. Next month we'll be back with cookbook tie-in. Stay tuned for more on that from Jane of Always Ravenous. 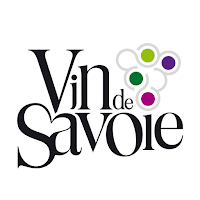 
I have also added this to #FoodieReads.
Click to see what everyone else read in February 2020: here.