Not So Blue Leek Soup for #FoodNFlix 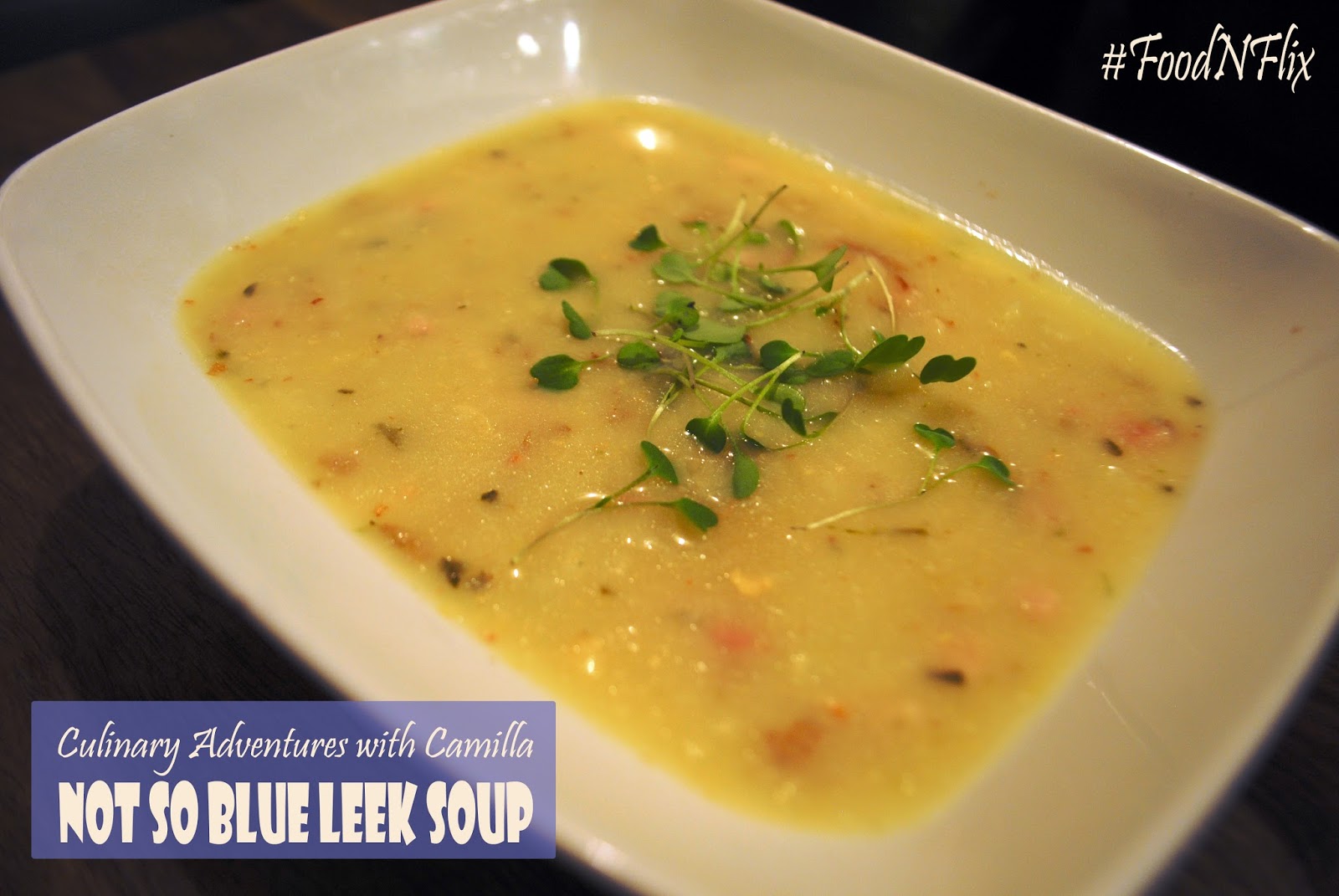 Evelyne, of Cheap Ethnic Eatz, is kicking off the 2015 Food'N'Flix events. We watched, or rewatched as the case may be, Bridget Jones's Diary. Click to see Evelyne's invitation.

This post contains an affiliate link for the DVD and the book - on which the movie was based - at the bottom.

On the Screen...
It's been years since I've seen this movie. And, to be completely candid, I wasn't too excited about watching it this month. I don't remember being entertained or amused by it oh, so many years ago.

I haven't read the books; I'm not a huge fan of romantic comedies; and I typically avoid chick-flicks at all costs. I know...I'm no fun. So, I approached this re-watching with some supreme skepticism and evident caution, sprinkled with a wee bit of dread.

Let's just be straight: this theme has been done and redone. It's predictable. It's dreadfully clichéd. But it is also a complete delight. Yes, I actually wrote that. It was charming and I'm glad I battled my reluctance and popped that DVD into the machine.

On the Plate...
I toyed with making a turkey currry. I actually did make an orange marmalade. That post will be coming soon. And I was intrigued by the green gunk [sic, I don't actually know what they were saying there - gunk, gung, gunge?!] that was her caper-berry gravy. I might have to try that one of these days.

But what I decided to cook - and share - is my Not So Blue Leek Soup. I know Bridget attributed the blue hue to the sting, but I can't figure out why there was string in the soup to begin with. Oh, well. As the characters toast: "To Bridget, who cannot cook, but who we love just as she is." To Bridget, thanks for the inspiration for this soup. It was delicious...and relatively low-effort.


Not So Blue Leek Soup
for #FoodNFlix, January 2015 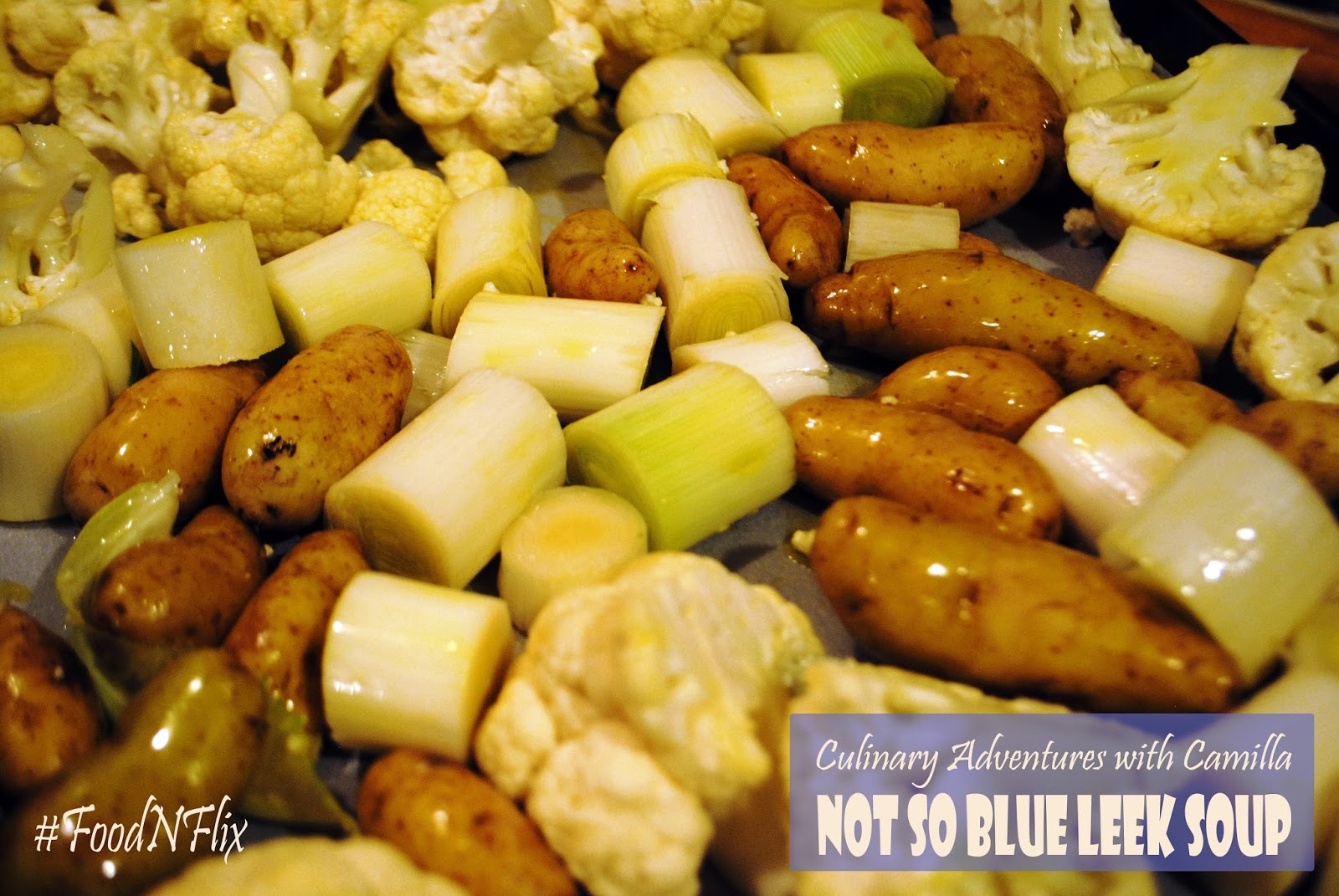 Procedure
Preheat oven to 375 degrees F. Toss your leeks, cauliflower bits, and potatoes together in a large mixing bowl. Coat with olive oil and lay out, in a single layer, on a parchment-lined baking sheet.

Roast until everything is cooked through, softened, and beginning to caramelize. Mine took about 50 minutes. 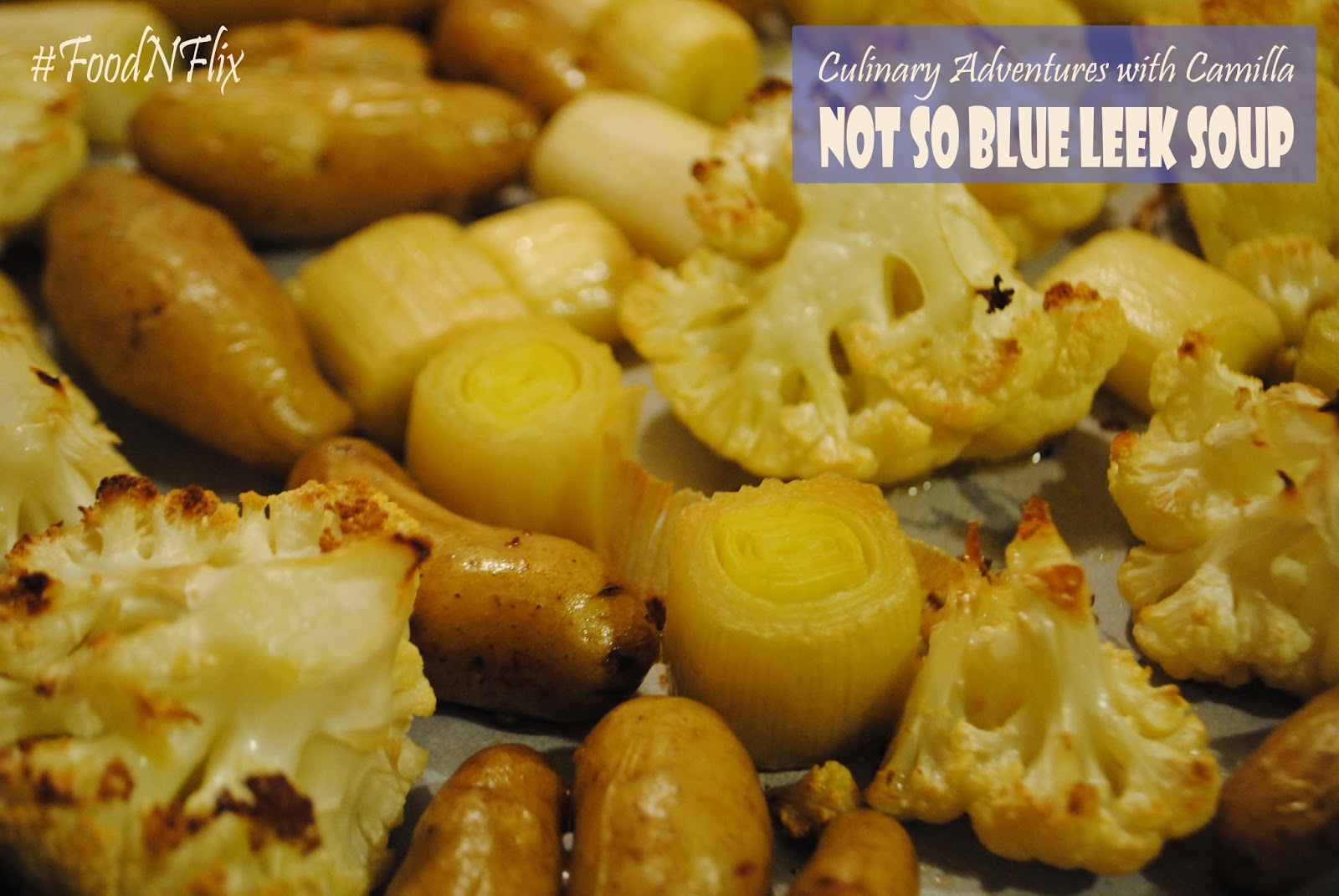 In a large soup pot, cook the pancetta cubes in a splash of olive oil - till it, too, is cooked through and nicely browned. Pour in 6 to 8 C of chicken stock and bring to a simmer.

In the meantime, blend your roasted veggies in batches, adding 1/2 C of stock to each blending. Spoon the puree into the soup. Once all of your veggies are pureed and incorporated to the soup pot, check your texture. If you want it thinner, add more stock. To finish, season to taste with salt and pepper. Stir in parsley.

Serve hot with a sprinkling of micro greens to garnish if you like.

What a great kick-off for the 2015 #FoodNFlix events. Thanks for hosting, Evelyne.

We'll be back in February when Elizabeth at The Lawyer's Cookbook is hosting. We'll be watching Lady and the Tramp. Stay tuned for her invitation. I am picturing lots of spaghetti and meatball posts and cute kisses coming up in February.