Do you forage? When I first mentioned this assignment, a friend from high school asked for clarification. "'Traditional Foraging' as in the fields and woods? Or 'Urban Foraging' like the hipsters do in SF dumpsters?" she queried.

Hmmmm...the former. I don't even know what a hipster is.

So, after I packed a picnic lunch for my boys and friends as they headed out to the archery range, I drove down the coast yesterday. If I had to work on a Sunday, at least this was my commute... 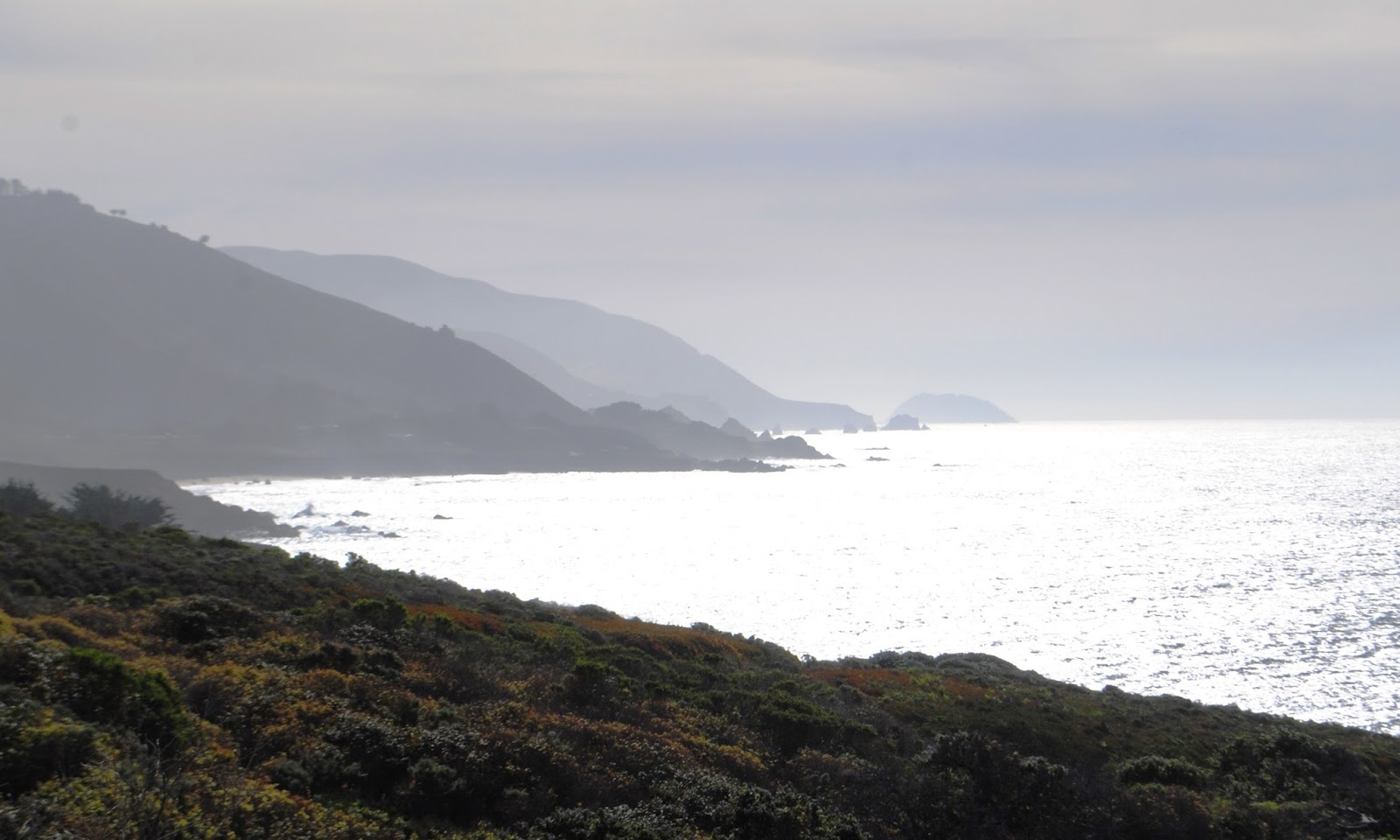 My assignment was to photograph the five local chefs who were doing cooking demonstrations with foraged foods. I have to admit that watching the chefs was simultaneously inspiring and intimidating. I was duly humbled by their talent and skills. They were truly incredible.

Class participants were divided into five groups, then they were treated to a cooking demonstrations by each of the chefs. We watched Chef Justin Cogley of Aubergine make a Fennel and Seaweed Jam. 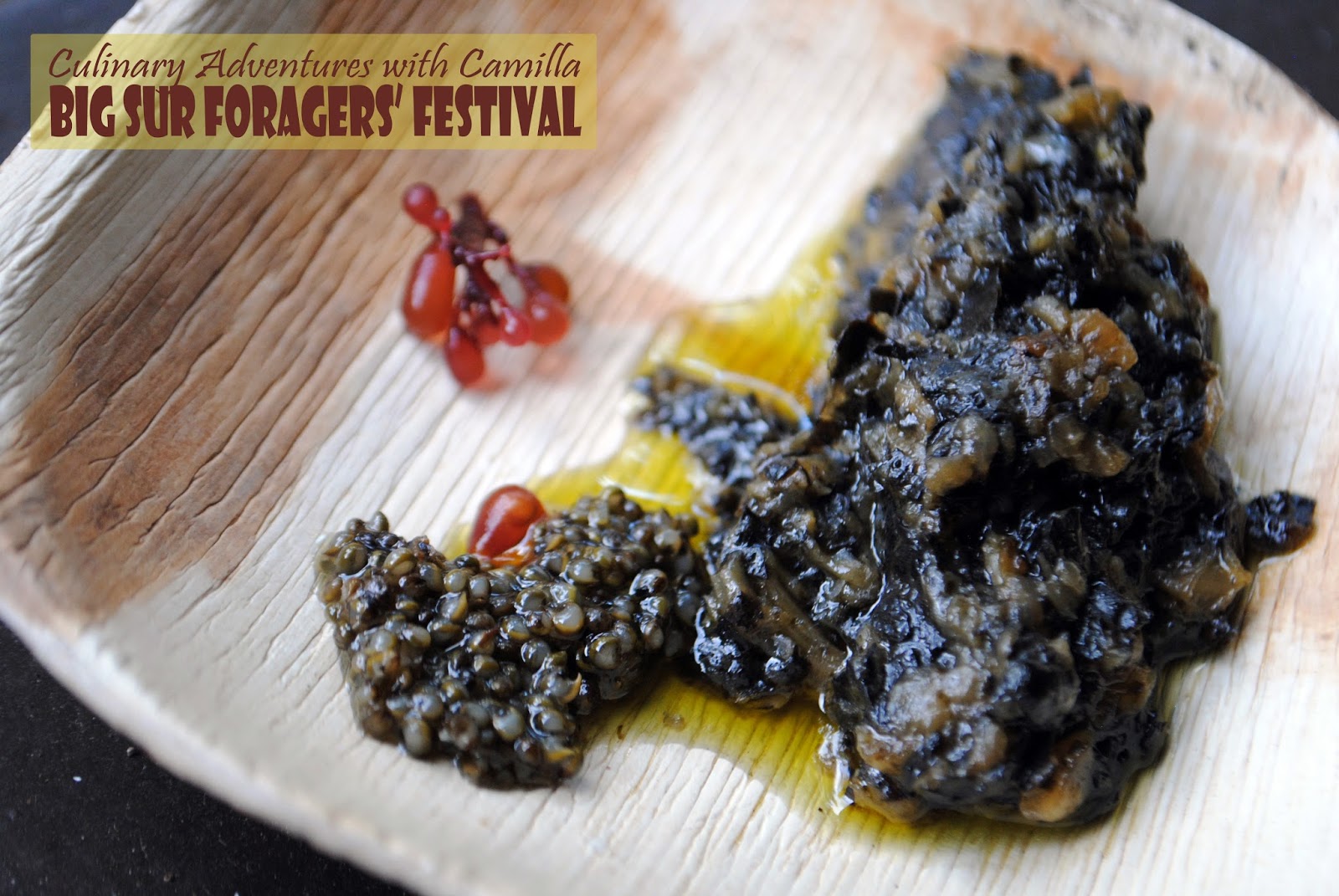 I cook with seaweed, but I would never have foraged Turkish towel from the beach and made a jam with it. It was just delicious - salty and toothy. I can imagine it on a piece of poached fish or maybe as a condiment to Chef Justin's abalone. 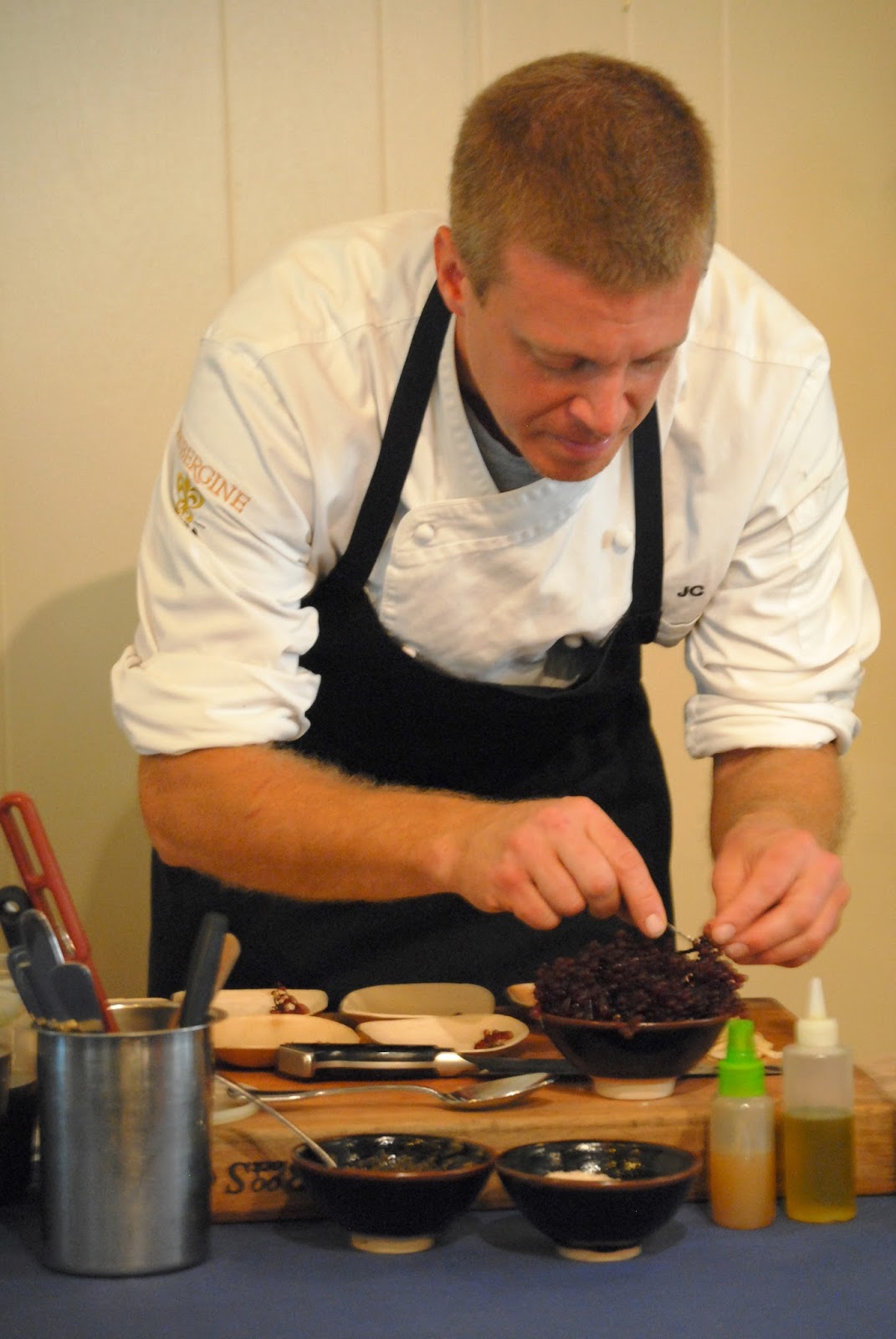 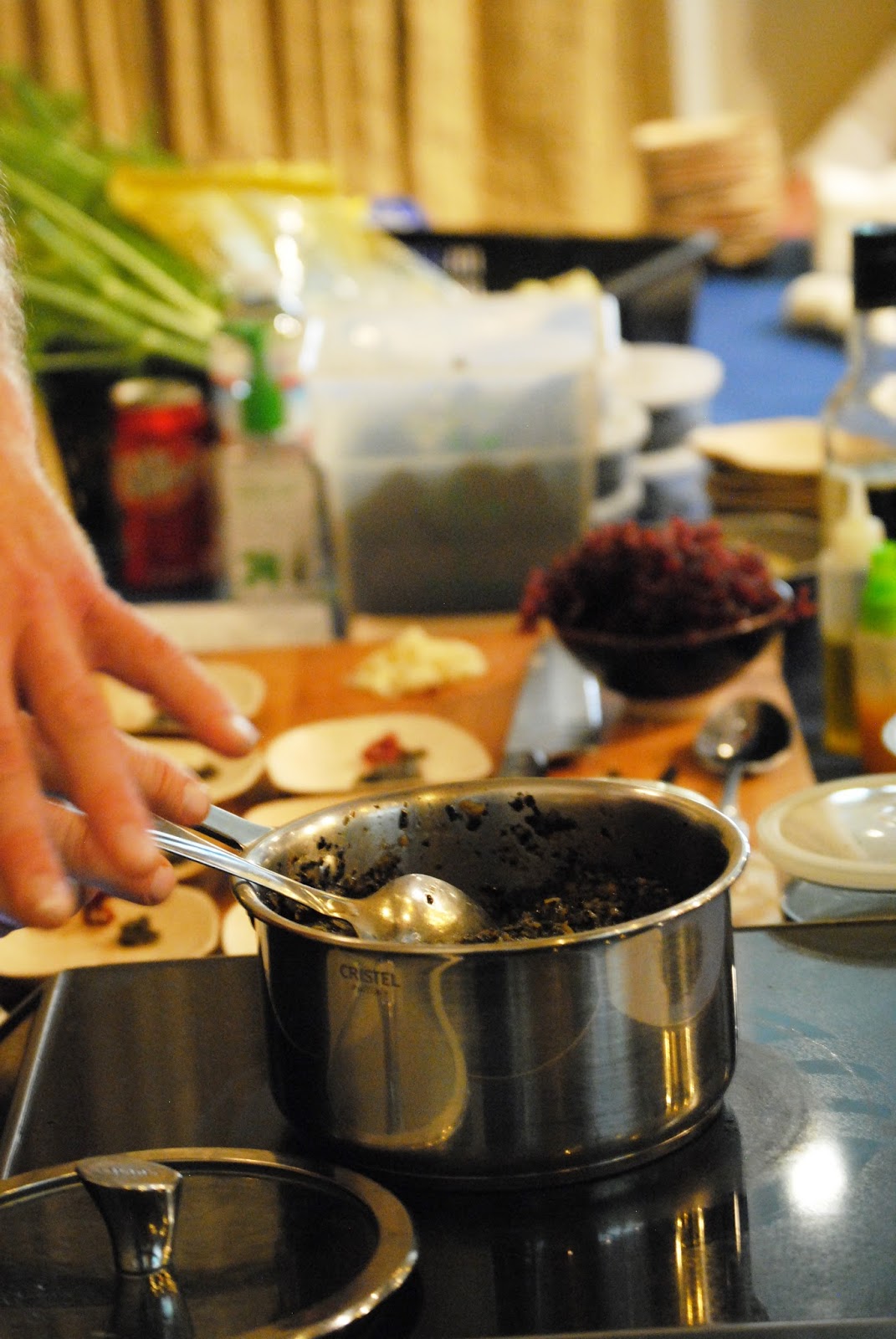 Chef Yulanda Santos of Sierra Mar at Post Ranch Inn shared her Sorrel Granita, pairing it with a bit of vanilla ice cream as a pre-dessert. "Pre-dessert?" asked one of the attendees.

More of a palate cleanser before your actual dessert, explained Chef Yulanda. What a crisp, bright dish! 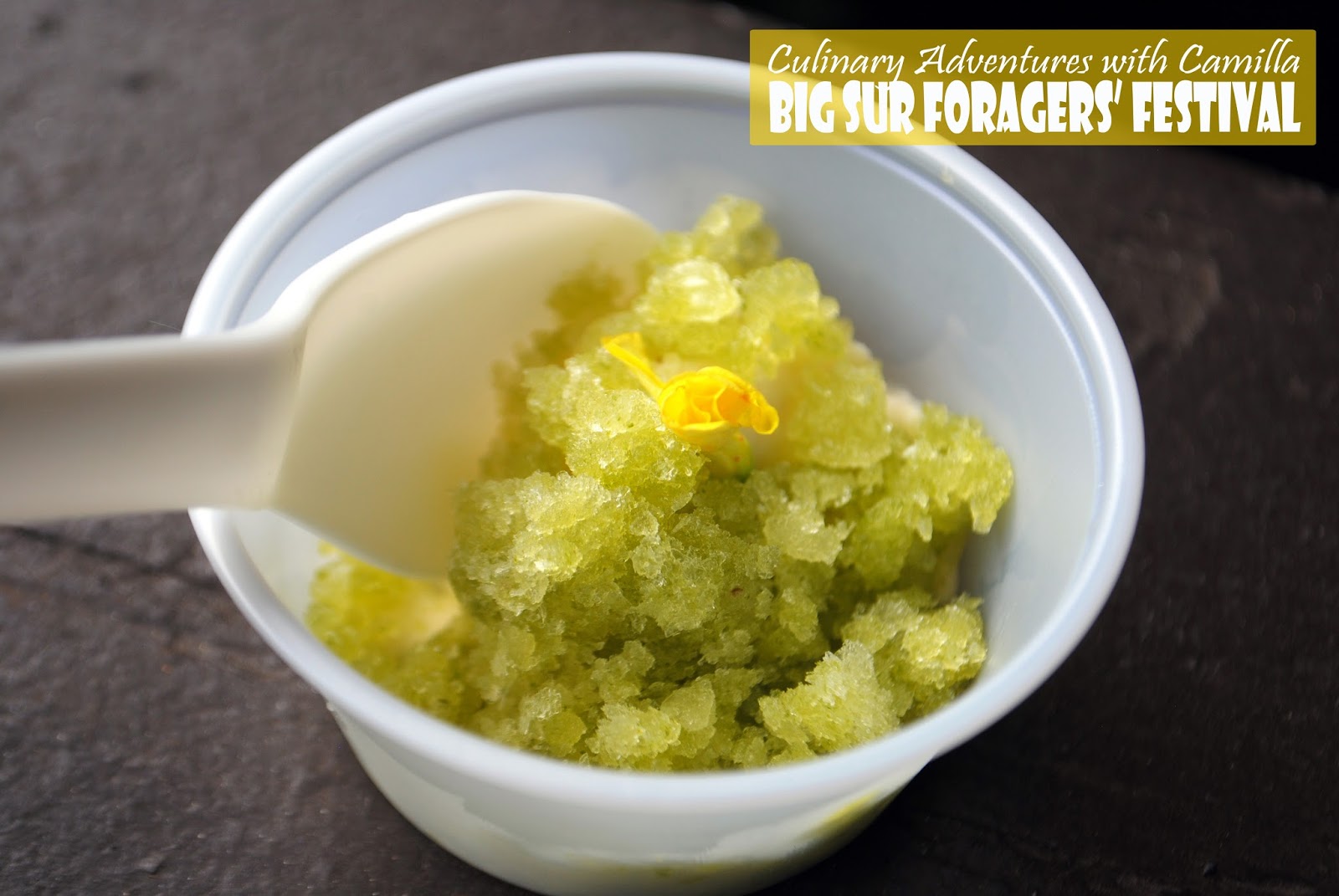 I learned that wood sorrel, Oxaylis, is the true name of what we called 'sour grass' when I was a kid. I have eaten plenty of those plants, but I never thought to cook with them. Chef Yulanda sniped the stems, blended them with a simple syrup, froze it, and scraped it to make her granita. 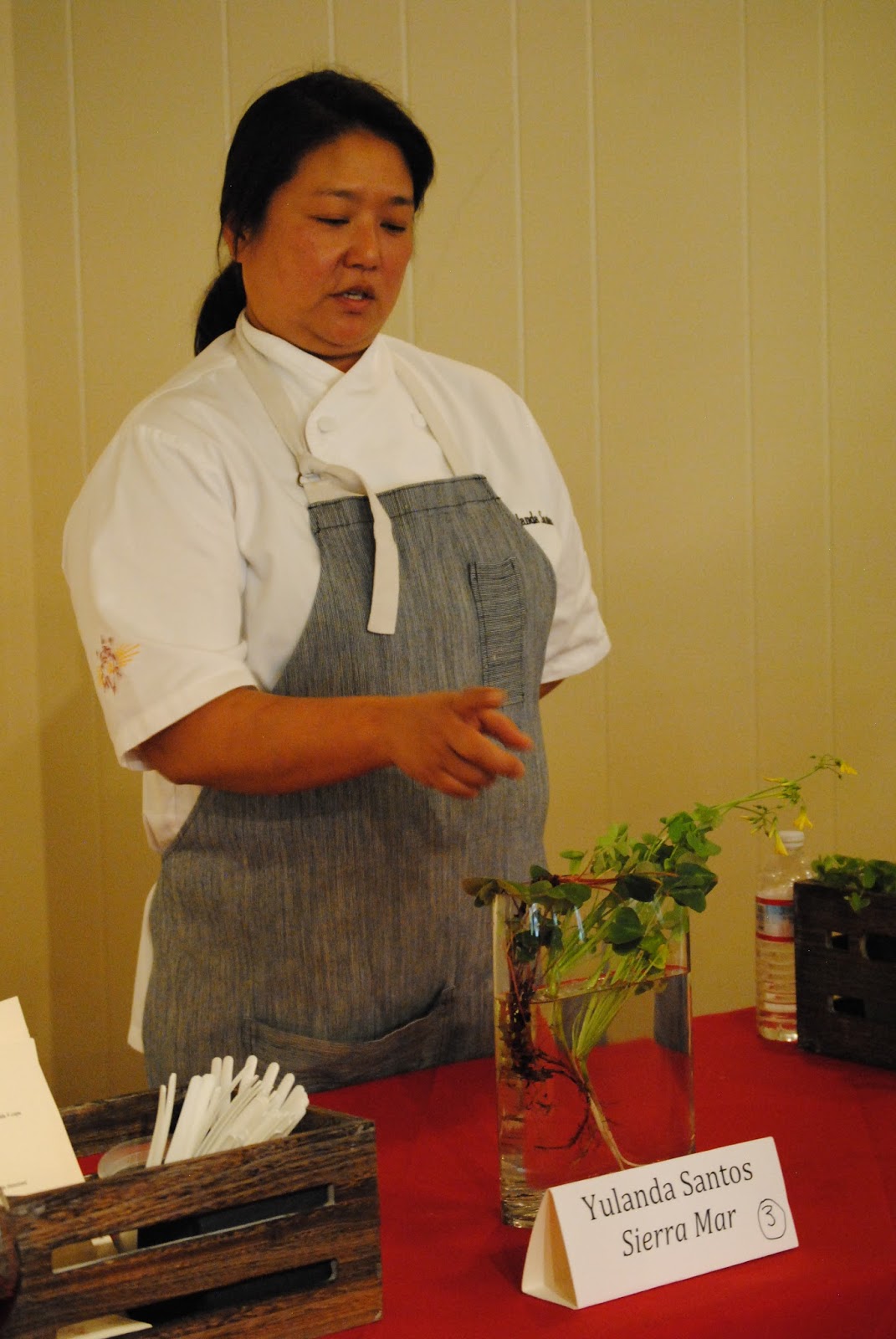 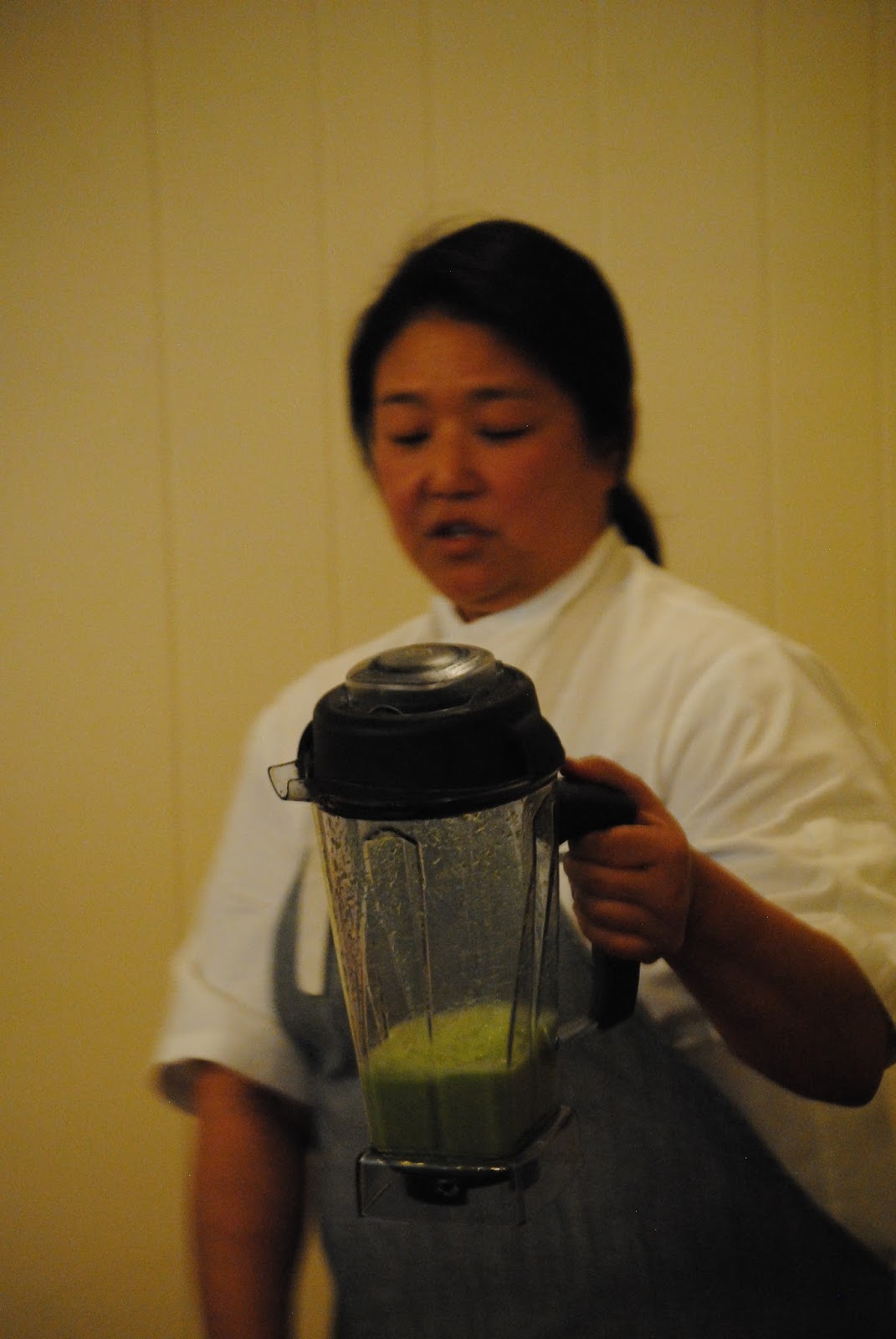 Chef James Anderson of Affina Carmel prepared a mushroom risotto with three different kinds of mushrooms. Note - Affina does not have a website or even a sign on the street, but they do have a twitter account! 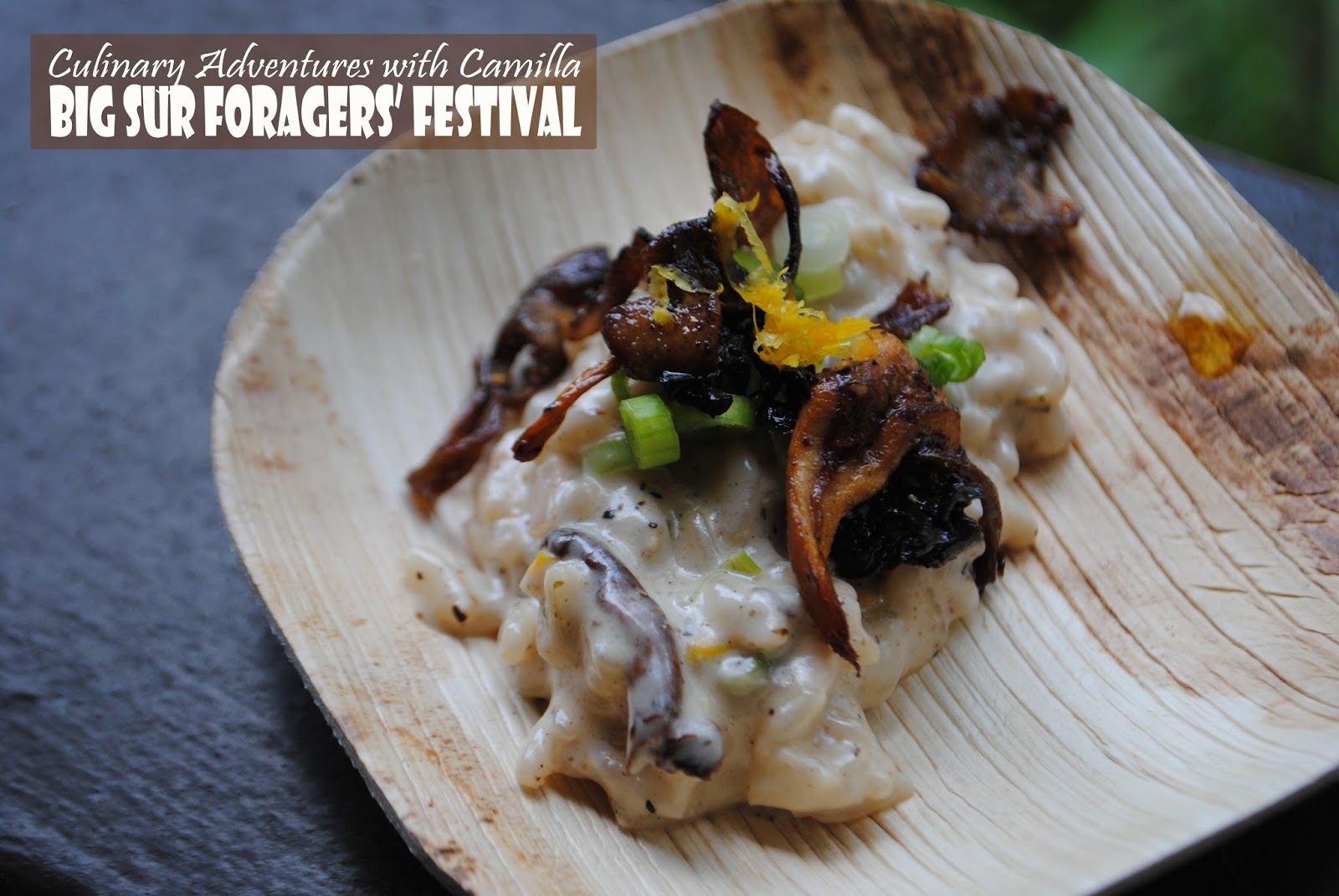 Chef James used hedgehog mushrooms, yellowfoot mushrooms, and black trumpet mushrooms, cooking them till they were crisp. It was a tremendous contrast to the creamy, goat cheese-dotted risotto. 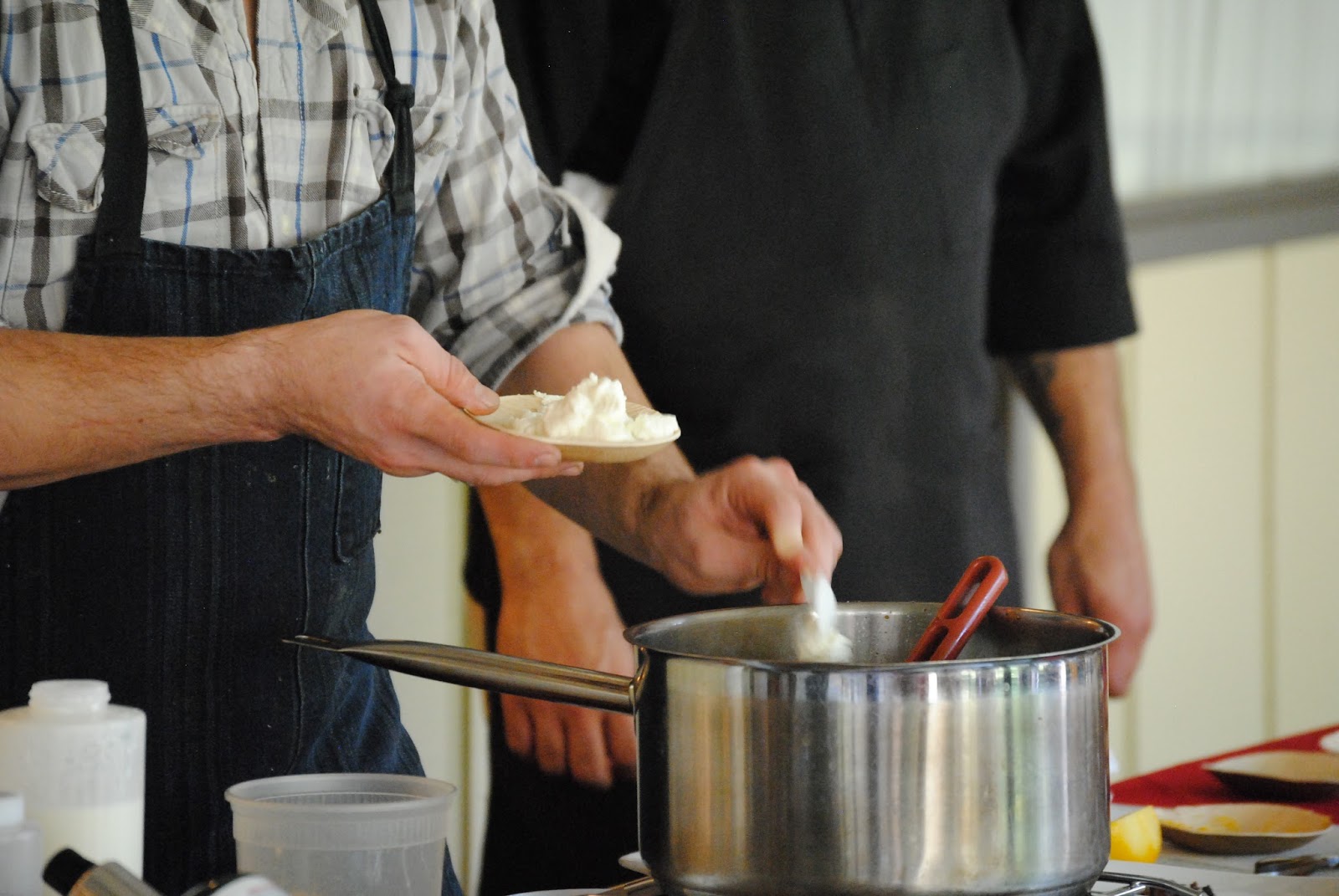 Big Sur Bakery's Chef Jacob Burrell surprised me - maybe - the most by choosing sea water as his foraged ingredient. 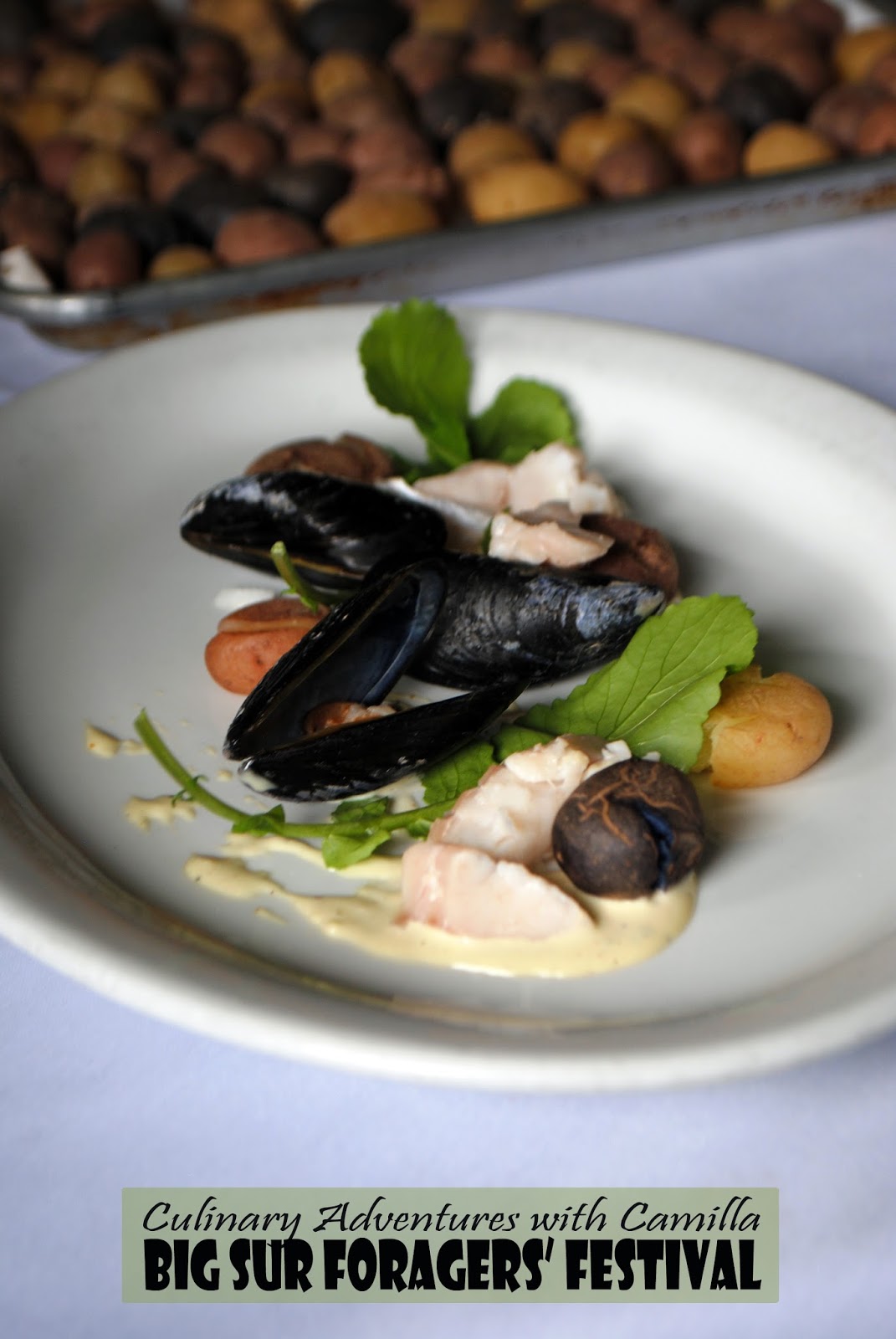 He used the foraged sea water to boil baby potatoes, steam mussels, and poach fish. Then he composed a plate with the different components. 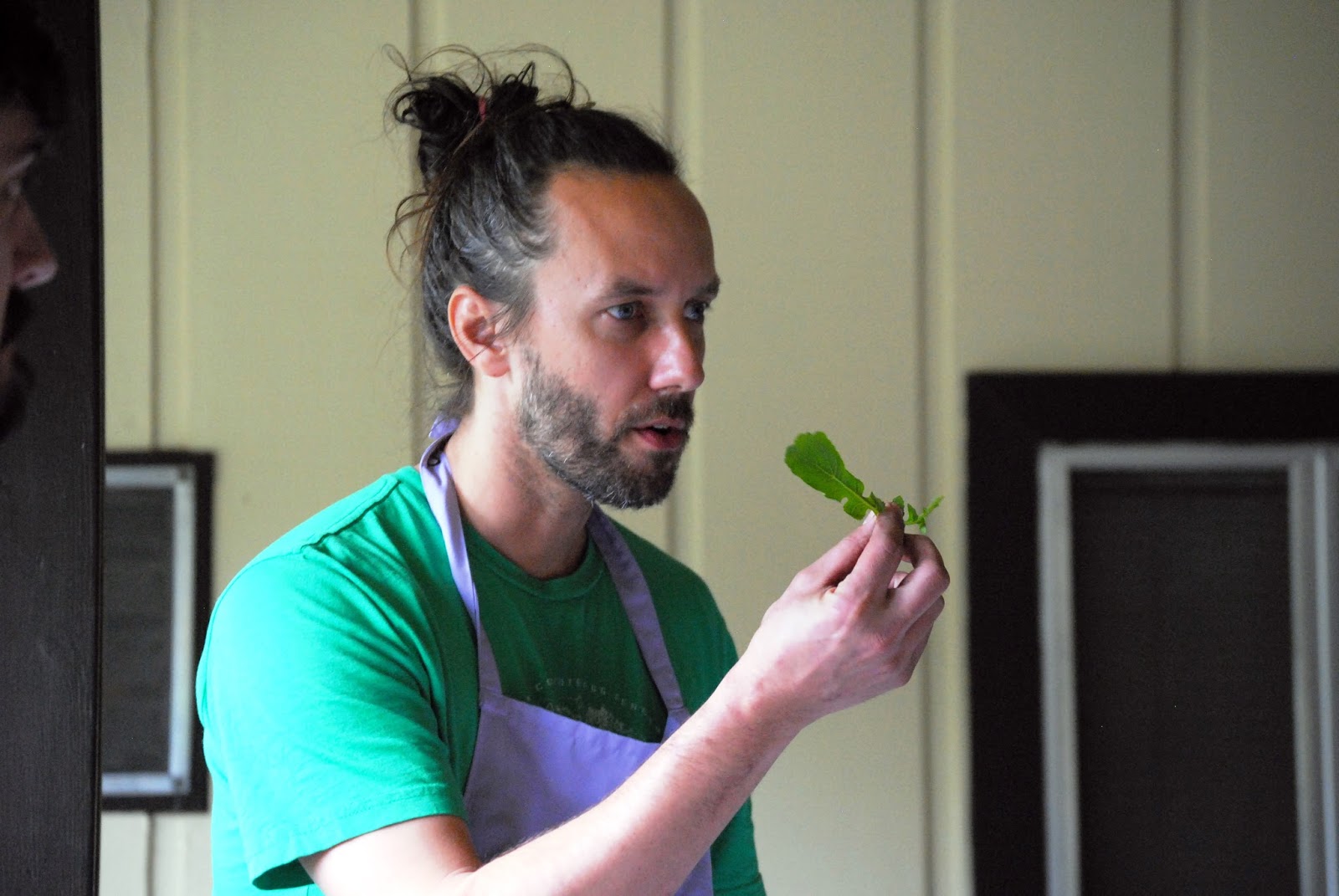 And last, but definitely not least, was Chef Brad Briske of La Balena Carmel. I told Chef Brad that my sons would be very upset to discover that I ate a Chef Brad creation without them! We adore La Balena. 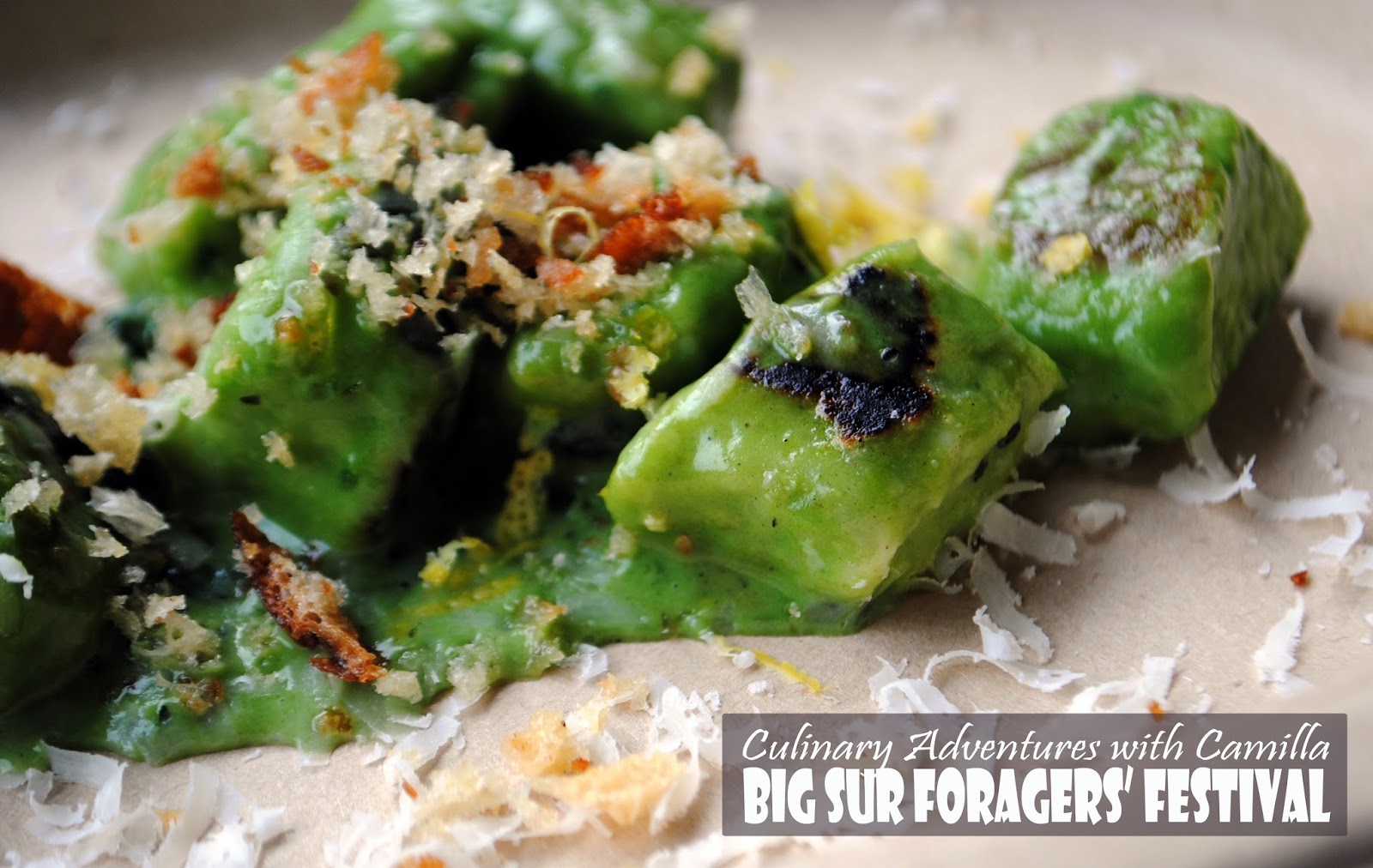 Chef Brad utilized stinging nettles from his friend's yard to create these verdant pillows of deliciousness. I have read his recipes for stinging nettles before but still wasn't brave enough to try it myself. 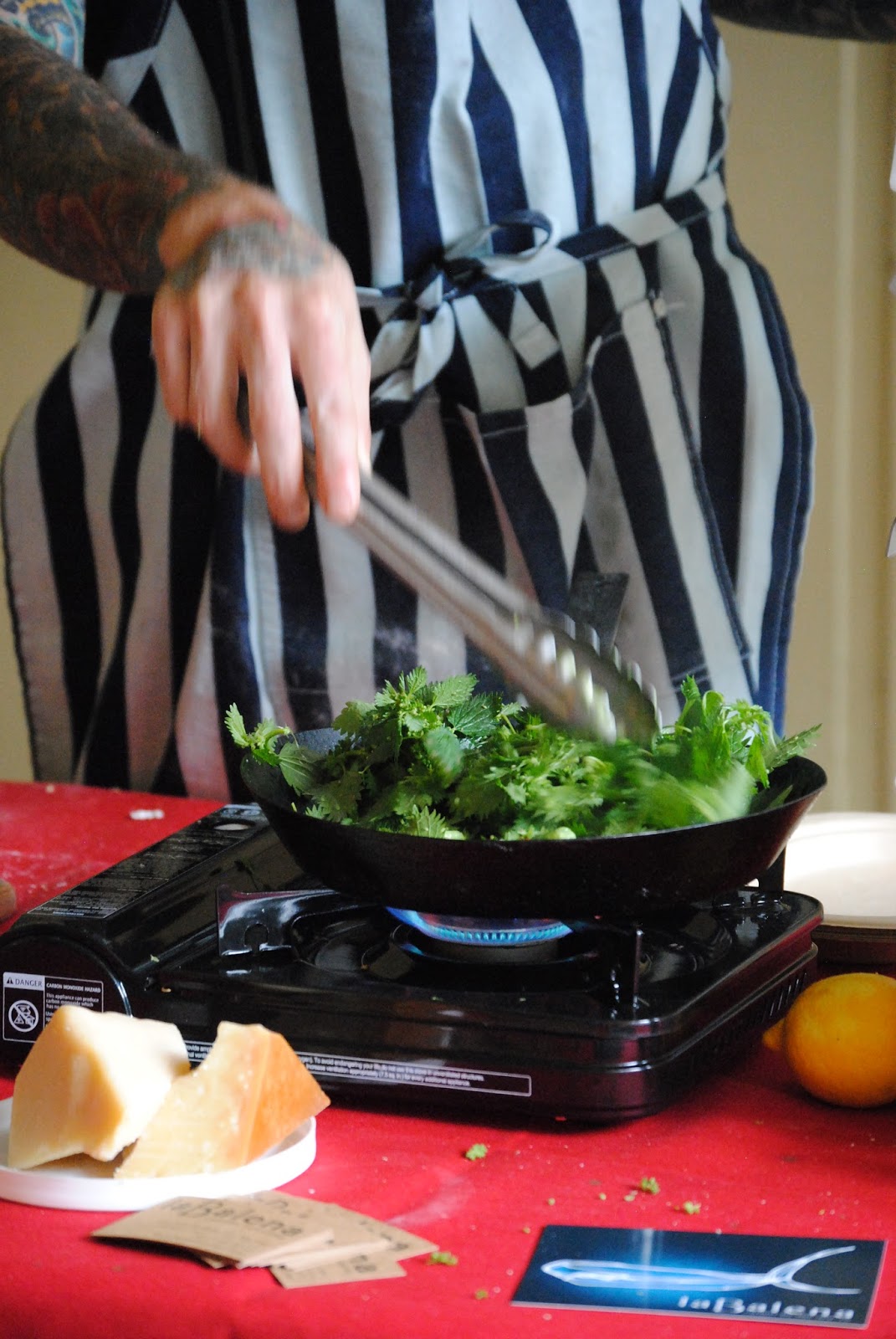 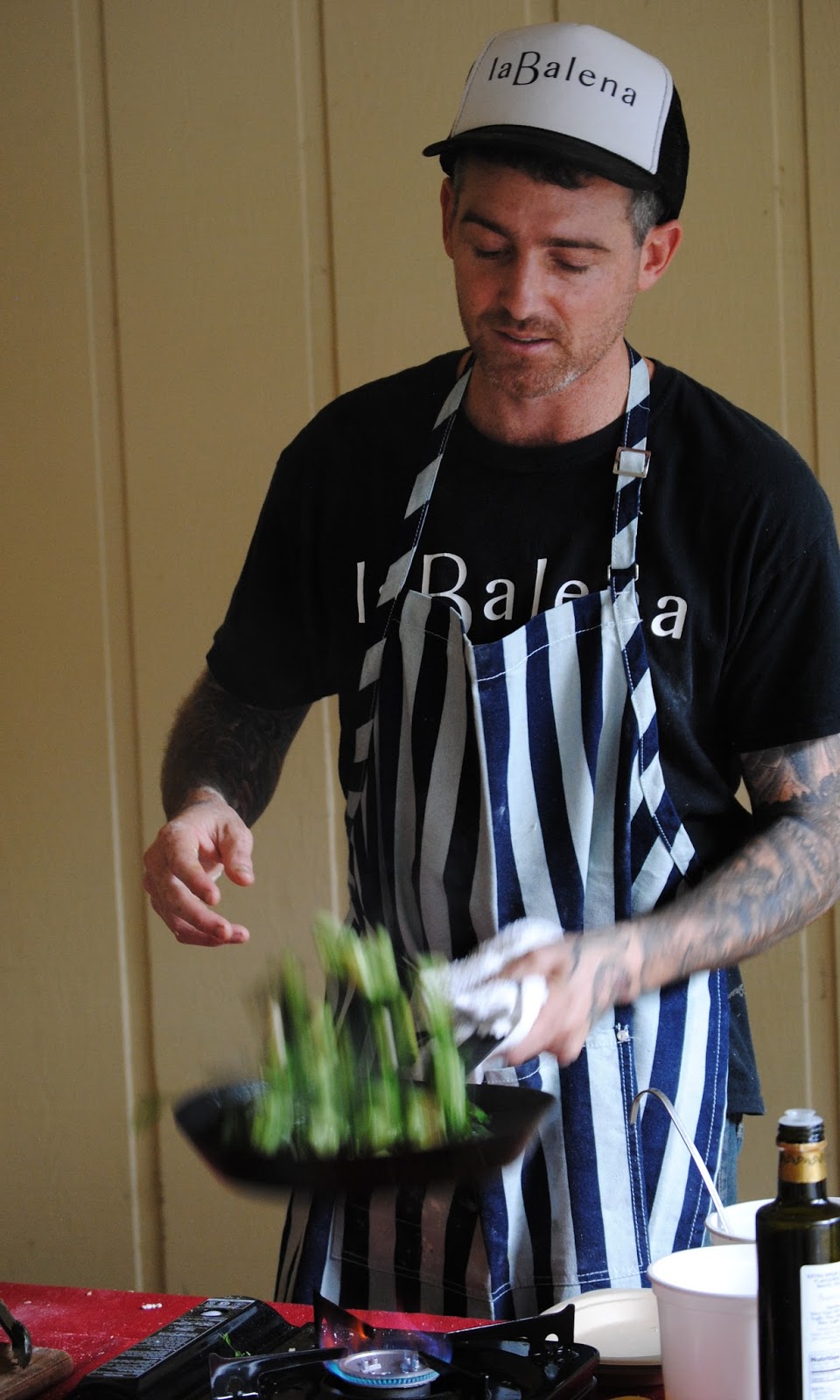 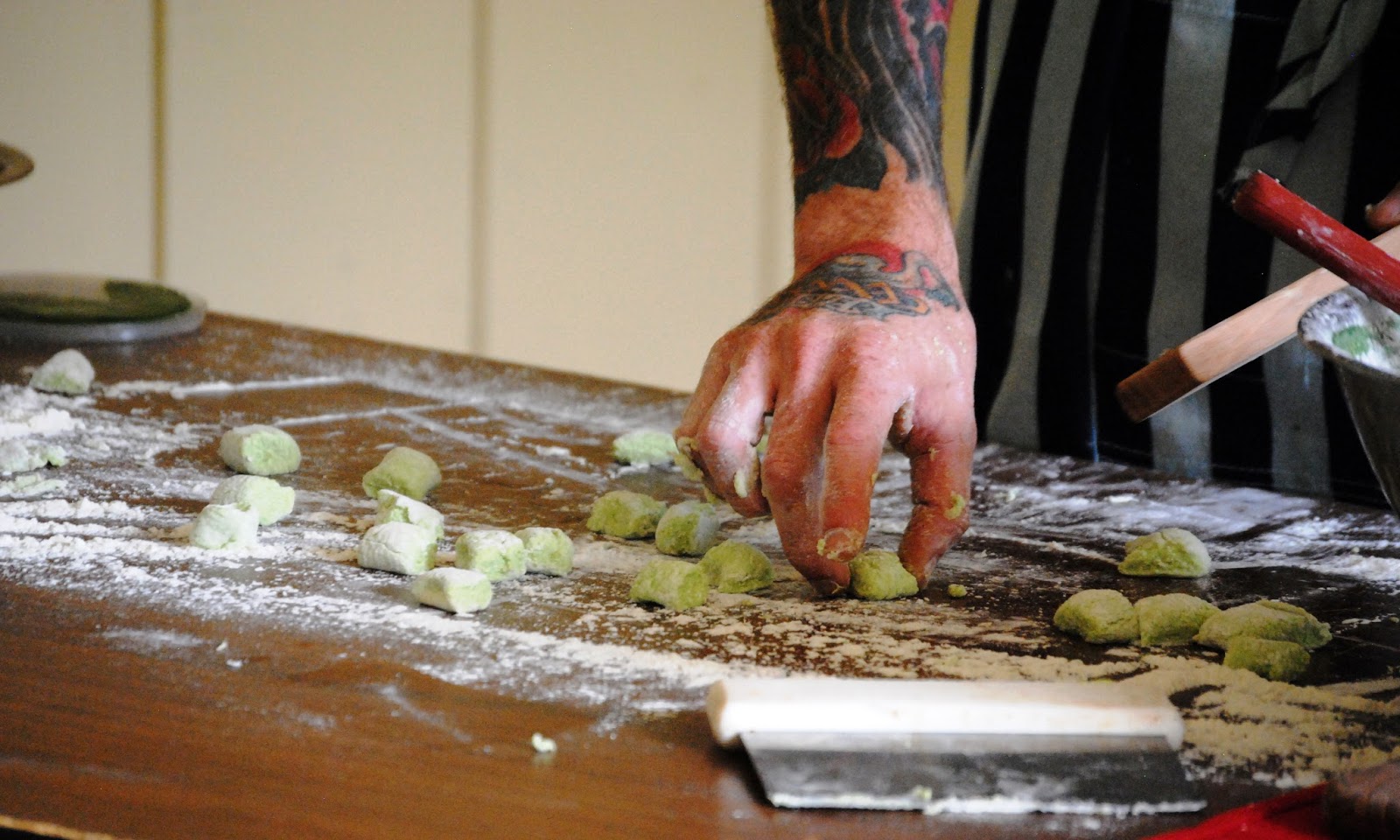 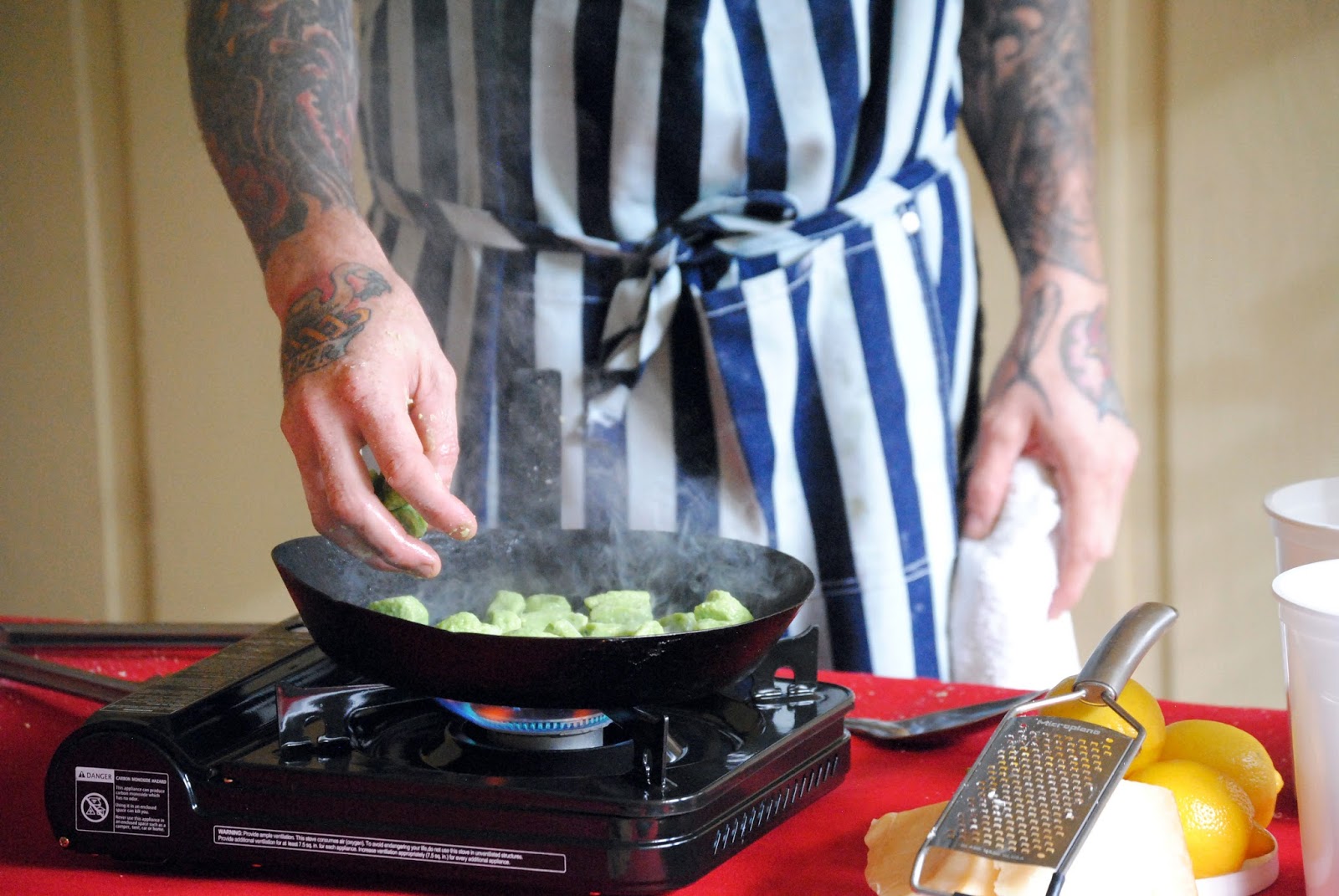 What an absolute delight it was to watch these chefs create with foraged ingredients! Maybe that will be my stated culinary adventure for 2015: forage. I've eaten miner's lettuce and sorrel - straight. I've never cooked with it. You might be seeing more of this from me...not the hipster version. This version - foraging from the woods and local natural environments. It's fascinating and resourceful. Who's with me??