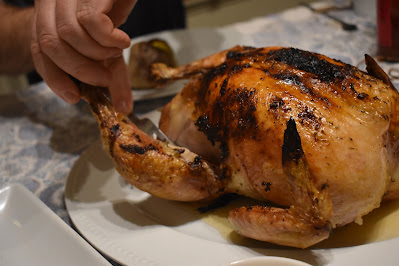 This month the Italian Food Wine Travel writers are looking at the Slow Food Movement. Here's the invitation from Gwendolyn: read it.
If you are reading this early enough, feel free to join in our Twitter chat. We will be live on Saturday, April 2nd. Follow the hashtag #ItalianFWT and be sure to add it to anything you tweet, so we can see it. Here are the articles that the writers have planned...
Buono, Pulito, e Giusto
Good, Clean, and Fair 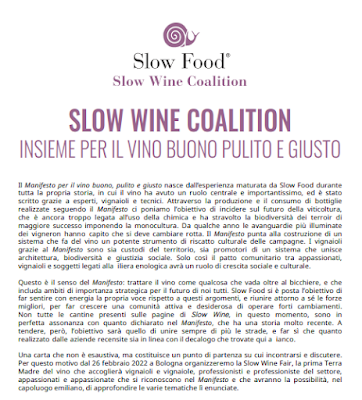 The Slow Food Movement, originating in Italy, calls for celebrating food, with an focus on food that is  locally grown, nourishing, and worthy of appreciation! Even more important, Slow Food embraces the vision of a world in which all people can access and enjoy food that is good, clean, and fair. It is those interconnected principles that made up and identify slow food and slow wine. 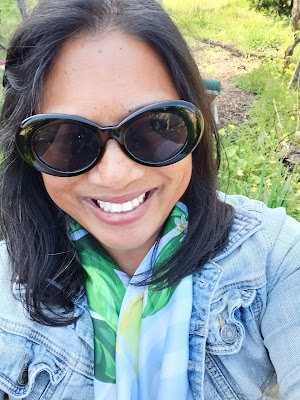 Nothing speaks to a good, clean, and fair food experience than a visit to a local, organic farm! A few weeks ago I went to the Thomas Farm in Aptos with two of my best friends. We were attending an event that included learning to make limoncello, preserved lemons, and a lemon-studded lunch. It was the first time we were celebrating a birthday in two years! And I was so excited learn the history of the farm. 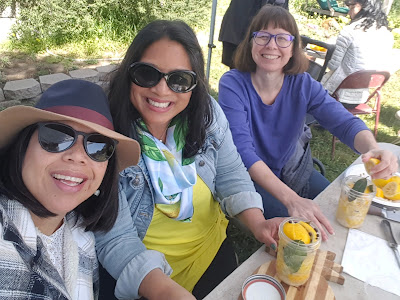 Jean was so humble and welcoming, I had no idea that she and her husband have received the so-called 'Sustie' Award. That stands for Stewards of Sustainable Agriculture. Jean and Jerry fled Los Angeles in 1970 and ventured up to the central coast of California where they found a modest home on five acres just east of Santa Cruz in the small town of Corralitos. The property included dry-farmed apple orchards to which they added tomatoes, squash, and flowers - all farmed without pesticides and without fertilizers.
The first Earth Day was also in 1970 and stores were buzzing with 'natural' and 'organic' products except that there was no official definition or certification of those terms. In 1971 Rodale's started the country's first organic certification and two years later just over 50 farmers - including the Thomases - decided to start their own certification system called the CCOF, California Certified Organic Farmers. The farmers created the standards for the organic label; they inspected and certified each other. Thomas Farm was one of the founding members of CCOF’s first regional chapter on the central coast. Their standards became the basis of the USDA's NOP, National Organic Program, that was established in 2000.

Jerry and Jean pioneered a market for organic cut flowers which was new to organic growers. Though many customers were aware of pesticides on food, they were less aware of how much the cut flower industry levied a chemical toll on the planet! The farm became known for its diverse selection of flowers. In fact, on the day that we visited, I picked up two bunches of beautiful tulips.

After four decades, Jean and Jerry have largely retired and their son is now in charge of the farm. They have been mentors to local farmers including Lonely Mountain Farm and High Ground Organics. They are committed to keeping their workers employed all year long as well as paying a living wage and guaranteeing a work environment free from toxins and pesticides. Those all speak to the clean and fair part of their food. And the goodness, well, that speaks for itself. 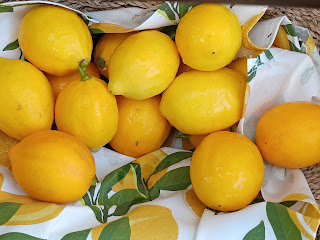 After our workshop, I picked a basketful of lemons. Three different kinds. All for just one dollar per pound. And I went home and made a ton of lemon recipes, including limoncello, lemon meringue pie, lemon marmalade, preserved lemons, and more. 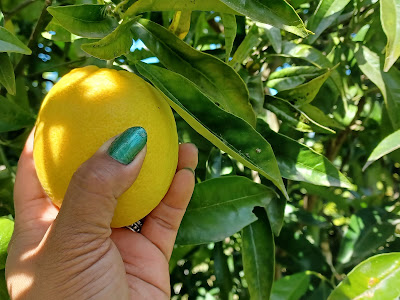 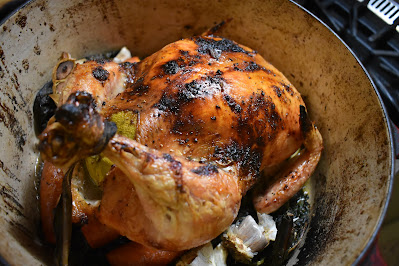 This lemon stuffed chicken is one of my standards, but it was made special by the fact that I picked these lemons myself.
Ingredients 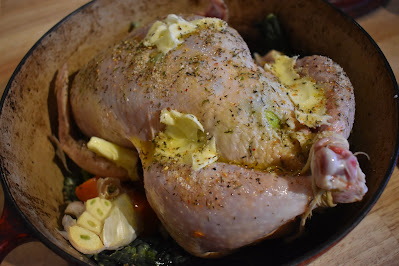 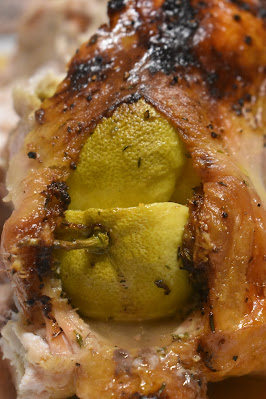 Preheat oven to 425 degrees Fahrenheit. Place sliced carrots and celery in the bottom of your roasting pan or Dutch oven to create a "rack" of sorts.

Stuff the chicken cavity with halved citrus and onion or garlic. Wedge the bunch of herbs side, then truss the chicken with 100% cotton twine and place it on top of the carrot-celery rack.

Rub the chicken with the softened butter. Sprinkle with salt and pepper and freshly chopped herbs. Nestle the halves of the garlic around the chicken. Drizzle the olive oil and wine over the chicken. 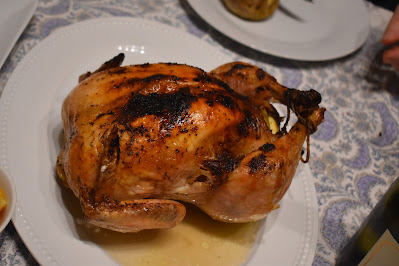 Lett the roasted chicken rest for 10 to 15 minutes before carving. Serve with a crisp green salad, preserved lemons, and a nice glass of wine. 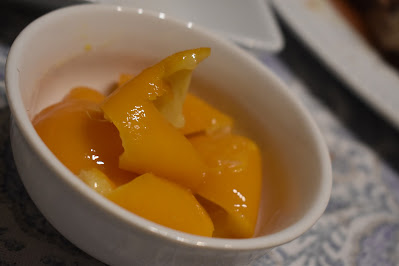 While we made preserved lemons during our workshop, they weren't ready for my dinner. And thankfully, I always have a jar of preserved lemons in my fridge. Here's one of my recipes for Preserved Lemons.
An Umbrian Chardonnay 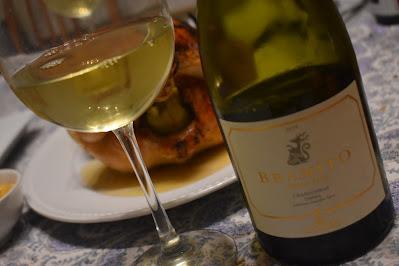 And to go along with my dinner, I poured a Chardonnay from Umbria: Antinori Castello della Sala Bramito Chardonnay 2019. 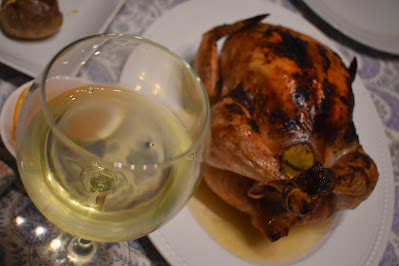 The Antinori family has been committed to the art of winemaking for over six hundred years when, in 1385 Giovanni di Piero Antinori became a member of the Arte Fiorentina dei Vinattieri, the Florentine Winemakers’ Guild. The estate from which the wine comes is Castello della Sala, located in Umbria not too far from the Tuscan border. The 420 acres are located over 600 feet above sea level and planted with traditional varieties such as Procanico and Grechetto but also with Chardonnay, Sauvignon Blanc, Sèmillon, Pinot Blanc, Viognier and a small quantity of Traminer and Riesling.
The Bramito is produced from the vineyards that surround the medieval castle at Castello della Sala. The Bramito 2019 is straw-hued in the glass and pours with a bright greenish rim. On the nose it has delicate notes of ripe tropical fruit with citrus undertones. This wine was elegant and fresh. While it wasn't on the list of slow wine producers, it was lovely. 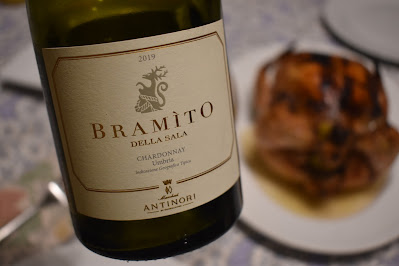 That's a wrap on my post for the April #ItalianFWT focus on slow food and slow wine. Stay tuned for our May event when we focus on the wines of Orvieto with the group's founder Jen of Vino Travels leading the discussion. Stay tuned.