This post is doing double-duty! I love being able to kill two birds (that is two assignments) with one stone.

Debra of Eliot's Eats is hosting our bi-monthly reading group Cook the Books. You can read her invitation here. And, if you'd like to join the fun, the posts aren't due till the end of September, so you still have time.

Then, for our Lit Happens book group, Wendy of A Day in the Life on the Farm picked the same book: Recipe for a Perfect Wife by Karma Brown.* That is not a cook-from-the-book kind of group, but I usually am inspired into the kitchen by anything that I read or watch.

And I love being able to consolidate posts, especially since I wasn't loving the book anyway. When you have a novel that includes physical abuse, deliberate lies and omissions between spouses, and spousal rape (sorry for that spoiler!), I am frankly surprised that I finished the book at all. But I did. 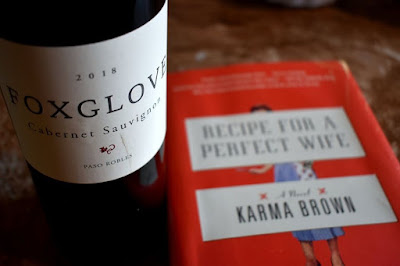 And, on the day that I finished, I came across this very fitting bottle of wine: Foxglove Cabernet Sauvignon out of Paso Robles. Actually I bought a few bottles of the wine and was able to give one to friends who were on the evacuation warning list from the fires we're having on California's central coast.


If you read the book, you'll know why foxglove is important to the plot. I won't spoil it for you, but let's just say that foxglove is poisonous in large doses...or repeated small doses. It's a dangerous beauty for certain. On to the book. Here we go... 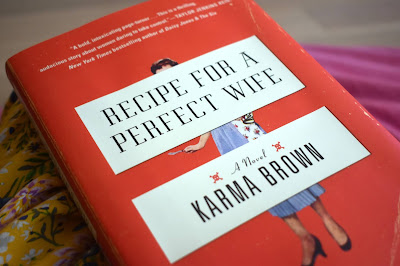 Recipe For A Perfect Wife by Karma Brown spans two timelines in a single house. In the current time, we have Alice Hale, a reluctant - maybe more resentful - modern-day housewife who has recently moved into the suburbs and discovers hidden letters from the previous owner, Nellie Murdoch, the quintessential mid-century housewife. Both women are navigating societal pressures and expectations of being that perfect wife. Domestic chores and, most importantly, motherhood. But neither wants to be a mother.

That seems intriguing enough, right? It might have been, but I truly despised Alice's character. As for Nellie, I could understand her choices, given the time in which she lived, and I found her character fascinating and complex. Also, you have to admire someone with that much passion and resolve. I may not have agreed with the tactic she landed on, but, she solved her problem.

As for Alice, I found her choices repugnant or at the very least those of someone who doesn't understand the concept of marriage or a true partnership. And she perpetuated her problems with lies and deceit. Really, the pressures she felt seems to be of her own making and her inability or unwillingness to communicate with Nate.

The idea of the story - that even after all the legal and social changes that have occurred, there still remains subconscious and immutable gender role stereotypes - is valid. I'm sure we have all experienced it in our own lives. I liked how the book started; I hated how it ended. Two things I found amusing throughout though: the misogynistic quotations at the beginning of each chapter - with an attribution to an actual person or publication (Someone actual wrote that? And someone actually valued the sentiment enough to put it in print?!?) and Nellie's recipes. 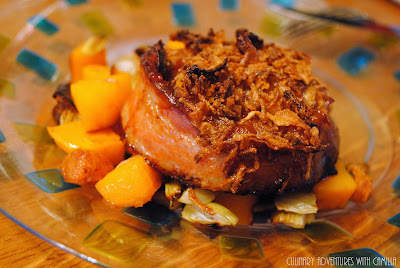 I chuckled every time I read one of the recipes from Nellie's timeline, that is to say mid-century; the recipes are dated, but fun to read. Boiled Chocolate Cookies, Chicken à la King, and Busy Day Cake were all new to me.

I've eaten that same Tuna Noodle Casserole every week of my junior year in college! That was one of my roommate's only recipes...and, on her assigned cooking day, she made it every week, exactly like that. Down to the bag of potato chips. I've blogged Cyn's recipe here and fed it to my family: A College Throwback + Potato Chip-Crusted Chocolate Tart. Baked Alaska may be a mid-century dish, but it's a family favorite. In fact, when my older son was applying to colleges last year, one of his requirements was that they needed to be within the 'Baked Alaska radius.' That is the distance that I would drive to bring him a Baked Alaska for his birthday. I've made that for him every year for this birthday since he was about nine years old when he discovered that dessert. Here's his 2017 birthday Baked Alaska...and the one from 2016. You get the idea.

After seeing Nellie's meatloaf recipe, I decided to make my own version. My family and friends love my bacon-wrapped mini meatloaves.

Ingredients makes 6 to 8 servings (photos are of a double-batch!)

Procedure
In a large mixing bowl, place the beef, garlic, lemongrass, ginger, and fresh herbs. Mix with your hands until well-combined. Preheat oven to 350 degrees Fahrenheit and line two baking sheets with foil
.
Divide into six equal sized portions (4 ounces each) and shape into disks. Wrap bacon slices around the disks so that the bacon ends meet or overlap slightly. 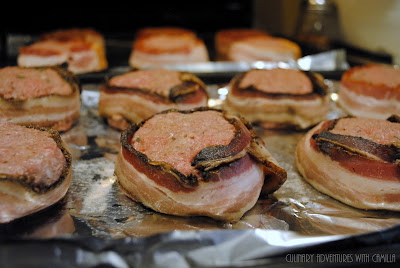 In a separate bowl, whisk together ketchup, mustard, and brown sugar. 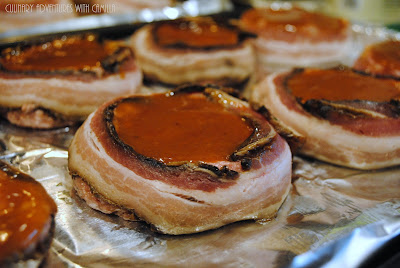 Bake in oven until bacon is golden, approximately 60 to 70 minutes. Serve immediately. 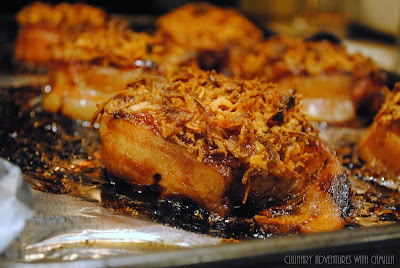 I am also linking this in to the monthly #FoodieReads event.
Click to see what everyone else read in August 2020: here.