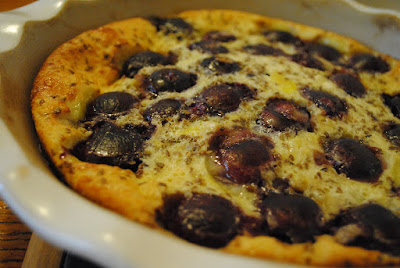 Welcome to the August 2020 Improv Cooking Challenge. This group is headed up by Nichole of Cookaholic Wife. And I haven't been very consistent, but I love the idea of the group, so I will try to be better in the coming months.

The idea behind Improv Cooking Challenge: we are assigned two ingredients and are challenged to create a recipe with those two things. This month's items: cherry and lime. Here's what the crew is sharing with those ingredients... 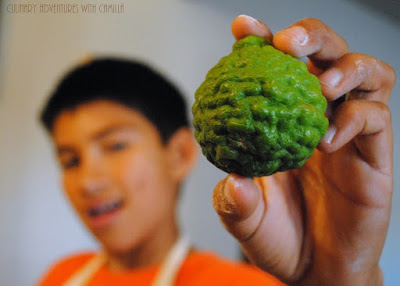 First a little about my lime, a Markut lime. It's not your 'run of the mill' lime...and it looks like a little green brain, doeesn't it? I do have to wax nostalgic about these fruits. Have you ever used a Makrut lime? Here's a brief intro to the limes - when I used to call them 'Kaffir' limes until I discovered there is some controversy about the name 'kaffir'. Not being an Arabic speaker, I can only accept what I am reading. Apparently 'kaffir' means 'infidel' or 'non-believer'. And it's largely used as a slur.

Okay, enough said. A lime by any other names...well, they are still as aromatic, unique, and gorgeous as before. But I now call them by their religiously-neutral name! 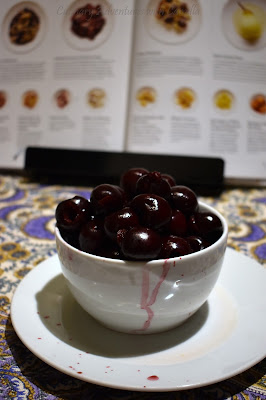 Cherries are just coming into season here, so this was the perfect time to make a clafoutis. It's one of my favorite cherry desserts. And I'm going to be a little bit of a stickler on terminology. You wouldn't expect anything else from me, right?

Clafoutis comes from the Limousin region of France and is traditionally made with black cherries; all other variations - made with plums, prunes, apples, cranberries, blackberries, peaches, and mango - are called flaugnarde. And here's another interesting tidbit, for clafoutis purists, the cherries are baked with their pits intact. The pits, when heated, supposedly impart a unique flavor to the custard-like batter. My cherries are pitted so...not traditional. But I did use cherries, so it is a clafoutis. In addition to the lime, I added in a sprinkle of anise seeds and a splash of cherry liqueur for more flavor. 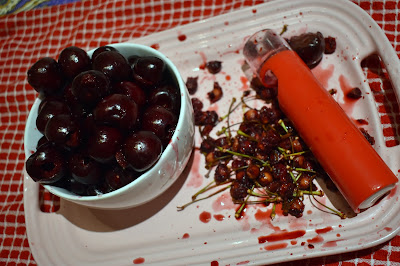 Destem and pit the cherries. Preheat oven to 350 degrees F. Place pitted cherries in the bottom of a buttered baking dish (I used an 8" square pan and a larger ramekin).

In a blender, combine remaining ingredients and process until smooth.

Pour the batter over the cherries. Bake until batter is set and the clafoutis is browned on top, approximately 40 minutes. Let cool for at least 10 minutes before slicing and serving.