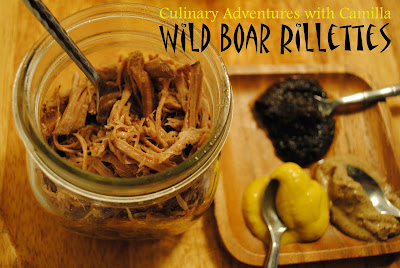 While working on my latest cookbook review, I needed some wild boar. Naturally, I asked my friend Brian, "the best killer in the family", according to Dylan.


Truth be told, this is not the creature we're eating. I think I cooked the pig before this one, or the one after. In any case, Brian gave me a piece of wild boar backstrap.

Before reading this cookbook, I had never heard of a rillette - much less eaten one. Rillettes are savory meats or fish that have been braised or prepared as confit.

This recipe - from Jesse Griffiths Afield: A Cook's Guide to Preparing and Cooking Wild Game and Fish - was so easy to do and resulted in a salty, creamy, satisfying dish. Stay tuned for my full review of the book. But for now, enjoy this...

I started with the backstrap, rubbing it with a mixture of ground ginger, ground cardamom, ground coriander, and ground cinnamon. I placed the meat in a baking dish and filled the pan with water so that it covered the meat three-quarters of the way. Cover the pan with foil and place in a preheated 225 degree oven. 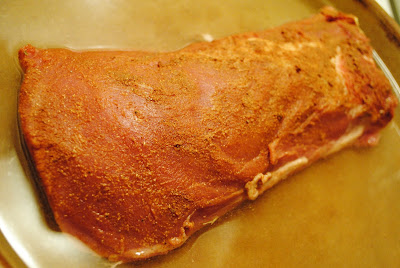 Let the meat braise for 8 hours. With a fork, shred the meat into a mixing bowl and blend in room temperature butter. While the original recipe called for lard, I subbed with butter. Season with salt to taste. 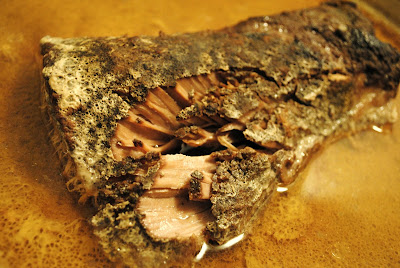 Now here's where the flavors really begin to sing. Serve the meat with crusty bread, pickles, and mustards. Cornichons are traditional. We served a jar of pickles that Riley made on New Year's Eve - pickled carrots, onions, and beets. 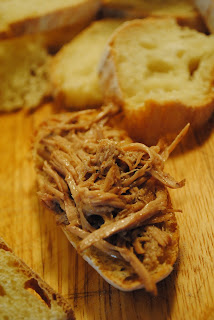 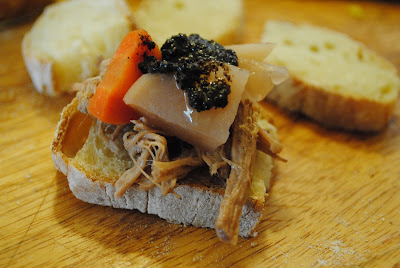 As a variation, I topped one piece with black truffle cream instead.