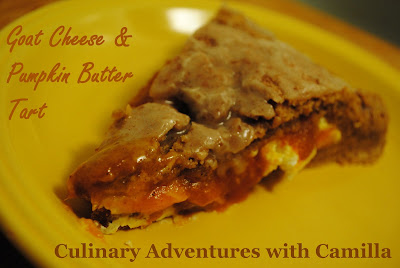 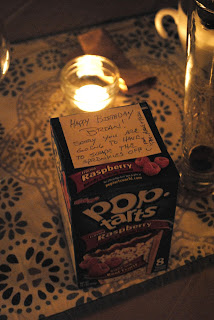 Last night, at a friend's 40th birthday party, he received a box of Pop-Tarts from some friends. Don't ask! I don't...

But sometimes that's all it takes to get my culinary gears churning. I woke up this morning, thinking I would make my own version for breakfast. I intended to make pocket-sized rectangular tarts, but ended up with one large round tart that we sliced into wedges.

I am certain that this tastes nothing like a Pop-tart, but it was Pop tart-inspired. 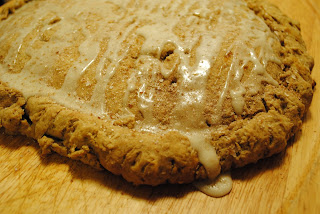 Preheat the oven to 350 degrees.

In a large mixing bowl, blend all of the crust ingredients and knead to form a soft dough. Divide the dough in half and roll each out into a round shape.

Place one round on a baking stone. Crumble chevre (goat cheese) in the middle, leaving about an inch border around the outside of the filling. Spoon pumpkin butter over the cheese and place the second crust on top of that. Fold the edges together to close the tart. Gently crimp. Cut whatever designs you wish in the top. This morning I chose hearts! Sprinkle with sugar and cinnamon

Bake for 45 minutes, until the crust is crisp and golden brown. Let cool for 10 minutes before glazing. Drizzle with a powdered sugar glaze and sprinkle with more cinnamon and sugar before serving. Serve warm.