A Double Feature: The Hunger Games {Cook the Books, Food'N'Flix} 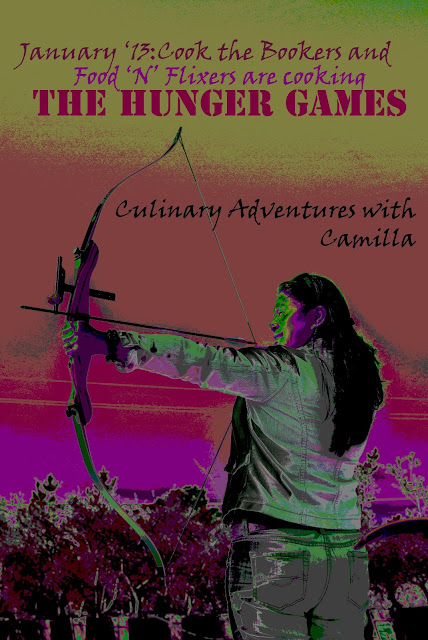 Heather of girlichef is hosting a double feature this month. To kick of 2013 we're reading The Hunger Games for Cook the Books and watching the film version for Food'N'Flix. Click to read her invitation to the fun and games. I initially planned to only watch the flick, but despite my best attempts to not overextend myself - see, I first created the image only referencing Food'N'Flixers! - when researching recipes I found quotations from the book that captivated me. And, just in case you're wondering, yes, that really is me with my son's recurve bow. Here's the undoctored shot... 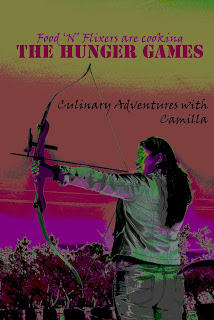 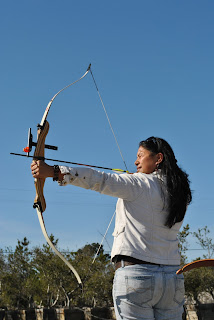 Thankfully I didn't have to actually shoot anything to feed myself. I would starve. Okay, that's enough time wasted with PhotoShop. Time to get into the kitchen. I decided that since this movie was the focus of two events, I should at least cook two dishes, right?

Panem is the location of this story set in a dystopian future. The name refers to the Roman times when Emperor Augustus sought to quell Plebian rebellion by providing Panem et Circensus, literally bread and circuses. As a superficial way of keeping the masses happy, Augustus gave them free grain and free entertainment in the form of chariot races and bloody gladiator displays. Ancient reality TV.

So, here we go. Loosen your corset and have a drink - as Haymitch says to Effie - and join me for some tabletop travel to Panem. 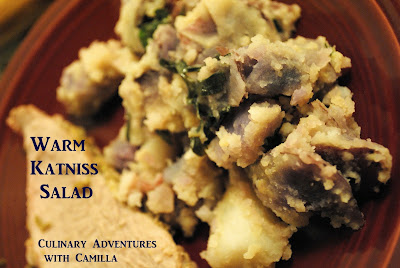 After her father's death, Katniss fills his shoes by acting as the sole provider and bread winner for her mother and sister. Her namesake - Katniss - is an edible underwater tuber that resembles blue potatoes. I decided to make a warm "katniss" salad with goat cheese that Prim could have made from her pet goat's milk.

I knelt down in the water, my fingers digging into the roots. Small, bluish tubers that don’t look like much but boiled or baked are as good as any potato. “Katniss,” I said aloud. It’s the plant I was named for. And I heard my father’s voice joking, “As long as you can find yourself, you’ll never starve.”

Make the dressing. Whisk together the cranberry juice, vinegar, mustard, salt, pepper, and garlic. Whisk in the olive oil. Taste and adjust seasonings, as needed. Set aside.

Scrub the potatoes and cut into cubes. Steam above 1 inch of boiling water until tender but not mushy, about 10 to 12 minutes. Remove from the heat and toss while hot in a bowl with salt and pepper to taste, parsley, goat cheese, and the dressing. Sprinkle the basil over the top and serve. 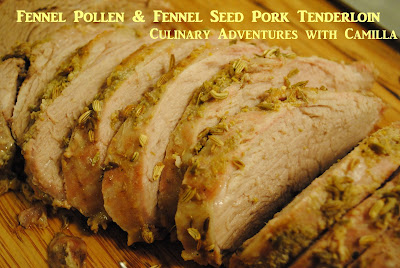 ...because I didn't want to roast an entire hog!

I love the scene in the movie when Katniss, to get the attention of the Gamemakers, uses an arrow to shoot an apple from a roasted pig's mouth. Roasting an entire pig can be time consuming, so I stuck with a manageable pork loin instead. This is so easy: All I have to do is heat the oven to 350 degrees, season the meat, pop it in the oven, and - voilà! - an hour later, dinner is ready!


Tonight I used 4 T minced garlic, 2 T honey, juice from 1 Meyer lemon, fennel pollen, and fennel seeds. I rubbed the mixture over the entire tenderloin, sprinkled it with pink Himalaya salt and flower pepper, placed it in a baking dish, and covered it with foil. I roasted it in the oven, covered, for 50 minutes, then finished off the hour uncovered.

While I never thought that I would watch this movie, much less read the book, I was duly captivated and intend to read the rest of the trilogy as time permits. The stack of books on my nightstand doesn't seem to be diminishing at all, despite my best efforts. Maybe that's because I keep adding to it! There is never enough time in a day....

There you have it, Culinary Adventures with Camilla's double feature dinner for Cook the Books and Food'N'Flix. You still have time if you want to join the party. Submissions aren't due to Heather until January 28th.


May the odds be ever in your favor!