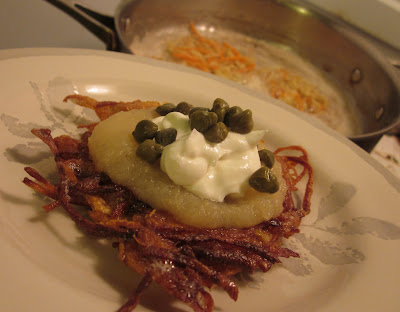 Okay, so we're not Jewish. But we are attempting to raise socially-aware citizens of the world who are not just tolerant of, but are knowledgeable about, religious and cultural differences. So, we celebrate Hanukkah.

Riley wanted a menorah as soon as he learned about Hanukkah in kindergarten; and every year I make latkes.

I read that the secret to making the perfect latkes - golden on the inside and crispy on the outside - is the starchiness of potato. The best, supposedly, are the baking russets; the worst are boiling potatoes. I opted to use what I had: Yukon golds. They fall in the middle of the starchiness scale. This year I changed it up a little by adding shredded carrots, too. Delicious!


Mix together shredded potatoes, carrots, diced onions and shallots, sea salt, freshly ground pepper, and beaten egg. Heat oil in a large flat-bottomed pan. When the oil is hot, spoon 2 tablespoons of the potato mixture per latke into skillet, spreading into 3-inch rounds with a fork. Cook until undersides are browned, about 5 minutes. Turn latkes over and cook until the other sides are browned, about 5 minutes more. Transfer to paper towels to drain and season with salt. Slather with applesauce, serve with a dollop of sour cream, and top with capers. 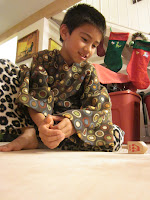 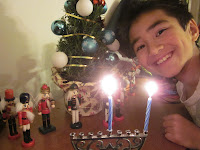 After dinner we lit Riley's menorah and played with Dylan's dreidel. Jake won all of the golden coins. There's always tomorrow.