By Camilla M. Mann May 23, 2011
While we were waiting in line to get into the Maker Faire - Riley stood huddled over his book, Dylan was pesting anyone and everyone he could reach - Ulla announced that she had a plan for dinner: Swedish meatballs at IKEA.


Bear in mind the one and only time Jake and I have ever set foot into an IKEA we were beset by claustrophobia, annoyed by the cattle-feel of the routing through the store, and swore to never go again. But, as I tell the boys, if you're with friends who want to do something, just do it...and smile while you're doing it. 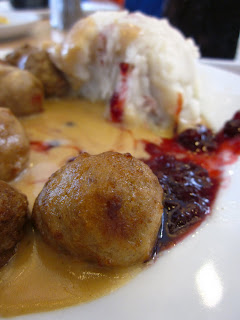 So, we followed the Novaks into the back entrance of the parking garage, rode the escalator up to the cafeteria, ordered plates of meatballs swimming in brown gravy, loaded up the trays with some sweets and drinks, and sat down at the table. It was only then that I noticed there were trays in front of all of us, but not in front of Ulla. She took me on this culinary adventure and then didn't even eat it herself!
Though I was not impressed with the cuisine, it was an adventure. Plus we always love spending time with the Novaks. Still, I won't be going back there any time soon.