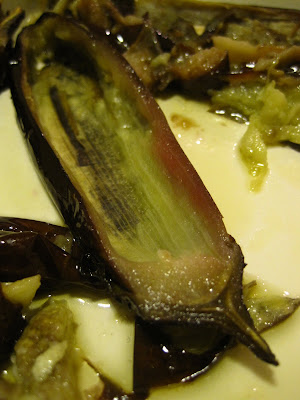 I'm not sure why so many eggplant recipes begin with roasting the eggplant, but I'm certainly not going to argue with the resulting silky perfection!

Depending on the size of the eggplant, slice them lengthwise in halves or in quarters. Roll the eggplant in olive oil and sprinkle with sea salt.

Cover your pan with aluminum foil and roast in the oven until the eggplant is completely soft - usually between 1-1/2 hours and 2 hours. Undercooked eggplant, to me, tastes like chalk. Yuck!

Once your eggplant is cooked, squeeze lemon over it, then scrape the meat from the skin.

This silky eggplant puree is the basis for so many Mediterranean recipes. I'll post some of my favorite recipes shortly.