How the Other Half Eats... 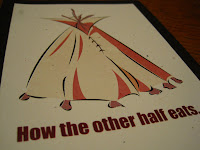 True to my non-conforming roots, I wanted to do something a little bit different for Thanksgiving this year. After some thought, I decided to do a Native American feast. So I researched some traditional recipes from different tribes, created a menu, and had a blast cooking. Here's what I made:

I'm happy to report that the Native American feast was outrageously well-received with smiles of appreciation and groans of gluttony. Photos and recipes to follow. But first I need to set a few carcasses to simmer for a pheasant-duck stock.