By Camilla Mann November 07, 2022
This is a sponsored post written by me in conjunction with the Consorzio of Prosecco Superiore DOCG.
Wine samples were provided for this post and this page may contain affiliate links 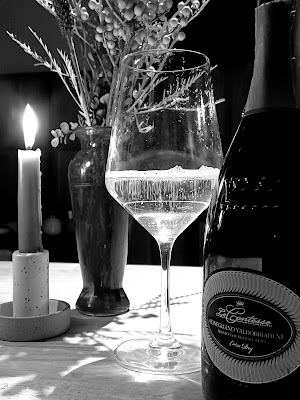 Let me start with this: I have always adored Italian bubbles. So, when Nicole of Somm's Table put out that the Consorzio of Prosecco Superiore DOCG was offering sample bottles to participate in a recipe contest, Certo! was my immediate answer. Not long after, I received a bottle of Le Contesse Conegliano Valdobbiadene Prosecco Superiore Extra Dry and began considering a pairing...or two. 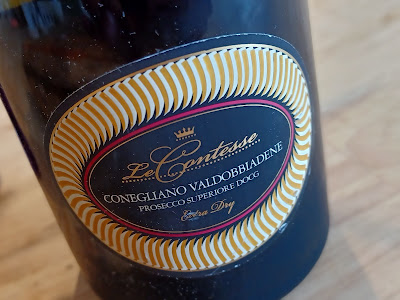 Let's start with a little primer about Prosecco...
DOC vs. DOCG
There are two classification labels for Prosecco - DOC and DOCG. On the map, above, you can see that the green area is the DOCG; the brown is the production area of DOC.
DOC is the acronym for Denominazione di Origine Controllata while DOCG means Denominazione di Origine Controllata e Garantita. The latter is more stringent with a much smaller production area. Where DOC production covers nine areas including four provinces of Friuli Venezia Giulia and five in the Veneto, the production area of DOCG is restricted to the Conegliano Valdobbiadene area, a hilly area in northeastern Italy approximately 30 miles from Venice. DOCG guidelines also require that government licensed representatives must taste the prosecco before it is bottled.
Prosecco DOCG is the highest level of quality of all Proseccos. In order to be classified as DOCG, a Prosecco must be produced with Glera grapes from vineyards in a very specific area, covering 15 communes, smack in the center of the entire, larger Prosecco region.
The Grape: Glera
In the past, the grape used to make Prosecco was called both 'Prosecco' and 'Glera'. It's a thin-skinned green grape has been grown in the Veneto and Friuli regions of northern Italy for hundreds of years. Some say it's native of Slovenia.

In any case, its bent toward higher acidity makes Glera well-suited for sparkling wine. It boasts a lovely perfume of melon, summer stone fruits, and light florals. Its range of aromas and flavors, in my mind, lend the wines to pairings both across the flavor spectrum. And, to that end, I created two pairings that marry the sweet and savory.
In My Glass 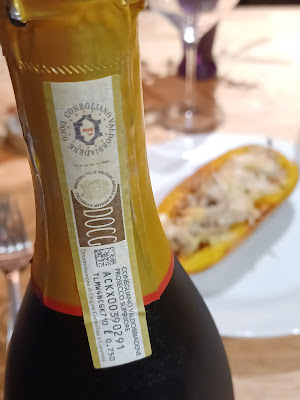 Le Contesse is named for the Countesses (sisters) Tiepolo of Venice who owned the estate in the 19th century. It is currently owned and managed by the the third generation of the Bonotto family. Loris and his wife, Luigina, began farming in 1976 and own more than 200 hectares of vines. Seventy of those hectares are certified organic. He shares on the company website: "Organic is the path we’d like to pursue, for us, for you, for our sons and daughters, and for the Land. Organic is synonymous with regular controls, because companies that produce organic Prosecco are very closely monitored; it means passion, because due to the very strict regulations, controls and various other factors, organic production is hard work and requires an innate love and respect for nature; it is a healthy option, because organic products are natural and follow the seasons, thus offering a healthier lifestyle in sync with our environment; but above all, it stands for quality, of the product and of life, because organic cultivation means protecting our own future and that of generations to come."
This wine is a single varietal - 100% Glera - that was grown in the Conegliano Hills about 200 meters above sea level. The berries were hand-harvested before undergoing a soft pressing and storage in stainless steel tanks. A secondary fermentation occurred in pressurized vats before bottling.
While the majority of Conegliano Valdobbiadene Prosecco is Spumante (fully sparkling), you can also find it in Frizzante (gently sparkling) and, in rare cases, Tranquillo (completely still). I, myself, have never gotten my hands on a Tranquillo, but I am intrigued by the idea and hope to find a bottle one of these days.
Prosecco also comes in three different categories of residual sugar: dry, which ironically is the most sweet with 17 to 32 grams of residual sugar per liter; brut, which is the driest with 0 to 12 grams of residual sugar; and extra dry whose residual sugar ranges from 12 to 17 grams per liter. This bottle of Le Contesse falls in the extra dry range.
The wine pours a pale straw color with persistent, delicate perlage. On the nose, I noted Autumn fruits such as apples, pears, and quince along with subtle florals of honeysuckle. But the palate was surprisingly savory with a crisp, elegant finish. And, after the first sip, I was even more convinced to go with dishes that were both sweet and savory.
On My Plate 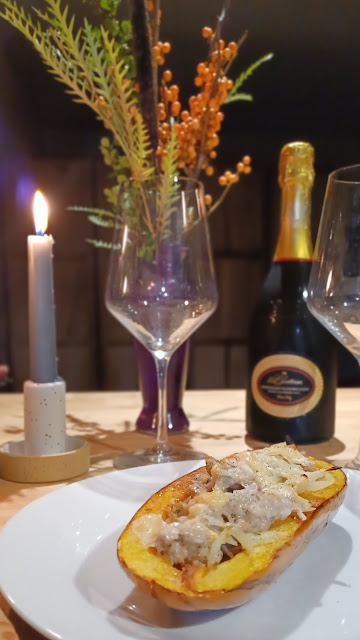 For the main course, I roasted delicata squash and stuffed it with Italian sausage. This is simple to make, but looks elegant and is filling. Match this with a crisp green salad and dinner is served!
Ingredients serves 2 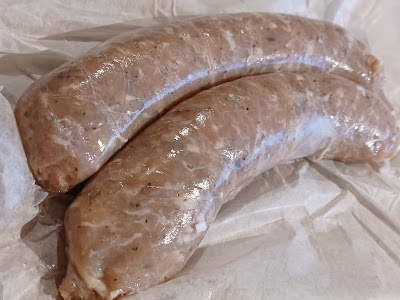 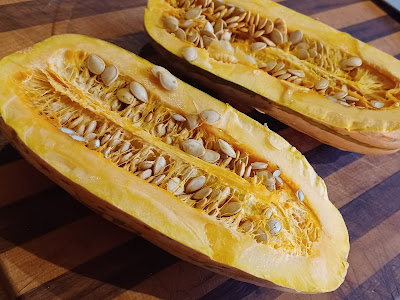 Preheat oven to 400 degrees Fahrenheit. Slice squash in half and scoop out the seeds. Drizzle with olive oil and place face down on a parchment paper-lined baking sheet. Roast for 30 minutes. In the meantime, make the filling.
In a skillet heat a glug of olive oil. Add in the onions and cook until softened and beginning to turn translucent. Add in the sausage and use a wooden spoon to break up the meat as it cooks. Set aside.
When the squash is done, invert the squash on the baking sheet. Fill the hollow with the sausage mixture and sprinkle the Parmigiano-Reggiano on top. Return the sheet to the oven and roast until the cheese is melted and beginning to brown, approximately 10 minutes. 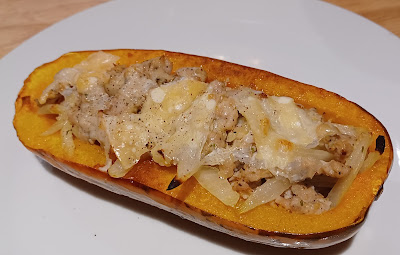 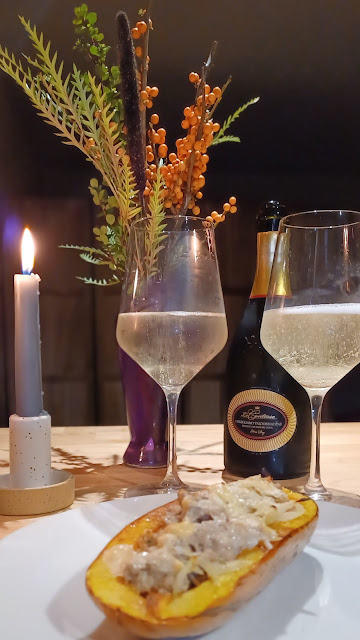 For my sweet and savory dessert, I went with a Vanilla-Mimolette Snickerdoodle Ice Cream Sandwich. I know, there are a lot of words and tastes swirling around in that title. But, trust me, it's a palate-pleasing dessert and a lovely match for the wine.
This all began with a trip to Berkeley last month. Jake was on a mountain biking trip to the mountains, so I drove up to Santa Cruz and picked up R and we headed up to Berkeley to spend the weekend with D. When we stopped in at Market Hall 4th Street, there was a display of Mimolette cheese with a handwritten note: "Try me with vanilla ice cream!" Yeah, okay. I bought a wedge.
And when I dropped R back off in Santa Cruz, one of his housemates had saved me one of his Snickerdoodle cookies to try. "Be honest," he said. I do not have much of a sweet tooth, I told him, but I loved it and asked him for the recipe. A little while later, I received a text. S is an astrophysics major and, like most, STEM majors, his directions are detailed and precise. I slightly adapted his recipe to reduce the sugar and incorporate brown sugar which renders the cookies a little bit more crisp and less cakey. But I have made them several times already. 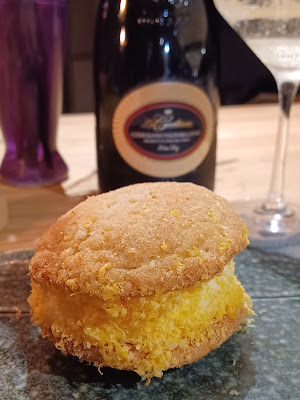 It always surprises me how beloved Snickerdoodles are. Since it's just me and Jake, now, I have been giving away more of my sweets after I bake and try them. No one needs two dozen cookies in their house, right?
Ingredients makes one dozen ice cream sandwiches 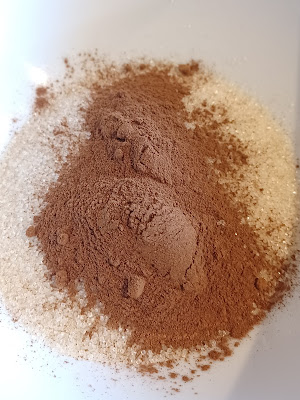 Preheat oven to 350 degrees Fahrenheit. In a small mixing bowl, blend together the topping ingredients and set aside.
In a large mixing bowl, cream together the butter and sugars until lightened and fluffy. Beat in the eggs and vanilla.
Sift in the baking soda, cream of tartar, and flour. Use a wooden spoon to incorporate the dough into a ball.
Using a scoop, portion the dough into small balls. Roll the dough in the sugar-cinnamon mixture and place on a parchment paper-lined baking sheet about 2 inches apart.
Bake in the preheated oven for 9 to 11 minutes, depending on your preference of doneness. The cookies with spread. The centers should be nicely raised and the edges crisp. The cookies will harden as they cool. 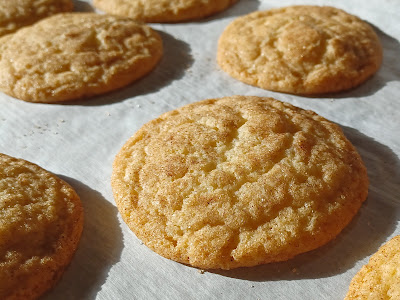