By Camilla Mann November 04, 2022
This is a sponsored post written by me on behalf of the Casa Vinicola Luigi Cecchi e Figli.
Complimentary wine was provided for this post and this page may contain affiliate links.
However, all opinions expressed here are my own. 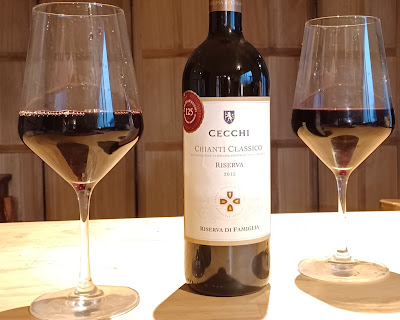 This month the Italian Food Wine Travel bloggers have planned a cavalcade of Chianti posts. Liz of What's In That Bottle? is hosting and had even arranged for several of us to receive samples from Cecchi for the event. If you are reading this early enough, we will be chatting on Twitter on Saturday, November 5th at 8am Pacific. Follow the hashtag #ItalianFWT and be sure to add it to anything you tweet so we can see it. Here's the line-up of Chianti articles from the group...
Chianti 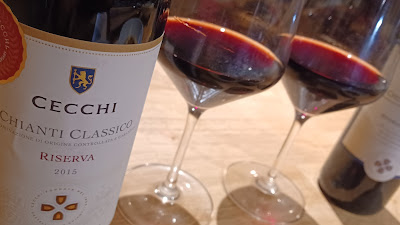 A Chianti wine is any wine produced in the Chianti region of central Tuscany. I grapple with what to write about Chianti and its Tuscan neighbors. There is so much to write and it's something about which that most people, at least, have an idea. Chianti was historically associated with a squat bottle enclosed in a straw basket, called a fiasco. However, the fiasco is only used by a few makers of the wine as most Chianti is now bottled in more standard shaped wine bottles.

So, I've decided to stick with some basics of Chianti, then I'll focus on the wines that I tried. First, Chianti is a region in the heart of Tuscany. Red wines produced in the region that are going to bear the name 'Chianti' must contain at least 70% Sangiovese grapes.


There are seven distinct subzones of Chianti with the most popular being Classico and Ruffina. Historically, Chianti Classico is where it all started. Not surprising as it's at the center of the region and all the others radiate from there. Classico has two additional labeling levels: Riserva and Gran Selezione. The former requires two years of aging in the barrel and another three months in the bottle. The latter is the newest designation within Chianti Classico only being recognized as recently as 2014.
Two Bottles of Chianti Classico 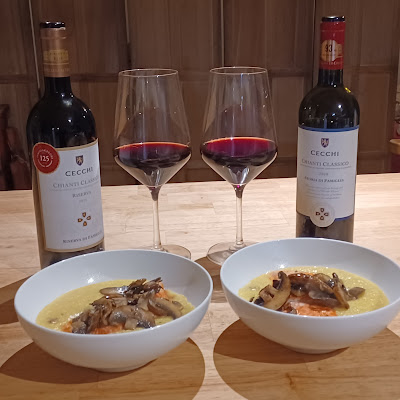 I received two bottles of Chianti Classico from Cecchi* - the 2015 Chianti Classico Riserva and the 2020 Chianti Classico Storia di Famiglia DOCG. Cechchi is truly a familial enterprise. Towards the end of the nineteenth century, after years of assisting in the cellars of famous vineyards in the area, Luigi Cecchi established his own business. Then his three sons, Mariano, Natale, and Francesco joined the business. And it has continued all the way to Cesare and Andrea who, along with their mother, Anita, have run the company since 2004.
In the 1970s Cecchi moved to Castellina in Chianti. Its fermentation operations are run out of four vineyards scattered throughout the DOC zones in Tuscandy and Umbria: Villa Cerna in the Chianti Classico region, Castello di Montauto in San Gimignano, Val delle Rose near Grosseto, and Tenuta Alzatura at Montefalco in Umbria. 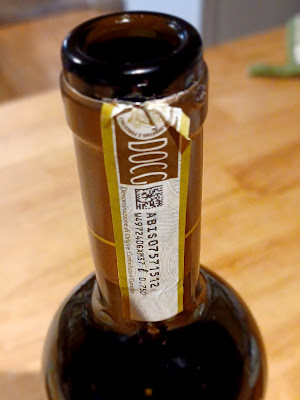 Cecchi Chianti Classic 2020 Storia di Famiglia DOCG has a suggested retail price of just under $30. With a composition of 90% Sangiovese and 10% Colorino and Caniolo, this classic wine was aged for a year in wooden barrels and a minimum of two months in bottles before being released. The wine poured a clear, bright ruby hue. On the nose, there were notes of red and black fruit along with a tinge of tobacco and anise. Bright and fruit-forward, I found that this wine reminded me why Chianti was my gateway wine! 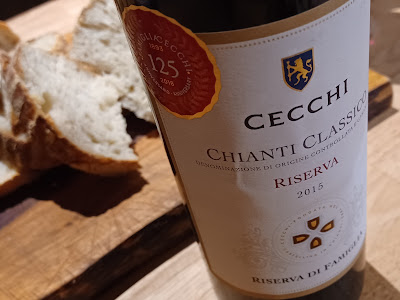 Cecchi Chianti Classico Riserva 2015 raises the bar and the price point clocking in at just under $50. Like the Storia di Famiglia, this bottle is 90% Sangiovese but the remaining 10% is Cabernet Sauvignon instead of indigenous Italian grapes. The Riserva designation means that it spent at least two years - instead of months - in the bottle before release. The wine poured a brilliant, intense ruby color and had aromas of red fruit and the earthiness of a wet forest floor. Redwood duff, anyone? This was less fruit-forward and had me dreaming of mushrooms. More on that soon.
Cucina Povera

Even though these wines are head and shoulders above my usual weeknight wines, they oozed comfort and had me longing to eat dinner in my pajamas. So, I decided to create bowls of comfort food and discuss the concept of cucina povera, which literally translates to 'poor kitchen.' This can be found in every single society on the globe and embraces making simple food with readily available, yet incredible ingredients! Think using every part of the animal. It is also a cuisine that doesn't require a lot of technique. Think long braises that peasants could put on the fire and let simmer all day while they work.
Okay, this bowl of deliciousness doesn't utilize pig's brain or anything challenging. Just tomatoes and eggs. With the 2020 Chianti Classico Storia di Famiglia DOCG, I made Uova in Purgatorio, eggs in purgatory. This is simply eggs poached in a spiced tomato sauce and was on our table often when the kids were little. When I served this to Jake a couple of weeks ago, in our empty nest, we ate, toasted with the wine, and rejoiced in the adults that our boys are becoming. 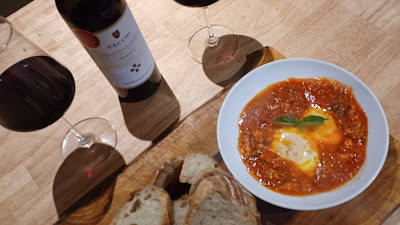 Then we laughed and laughed when we received this photo from D just as we were sopping up the leftover sauce with my homemade bread. 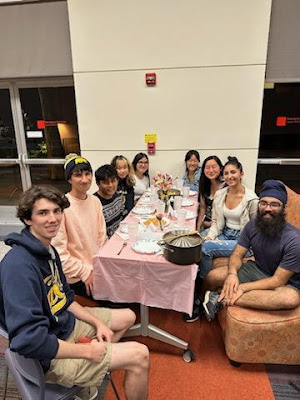 He and his dormmates had just had a cooking competition with eggs and tomatoes. He had made the exact dish we were eating 100 miles away; one friend made an Assyrian dish and another made a Chinese dish. 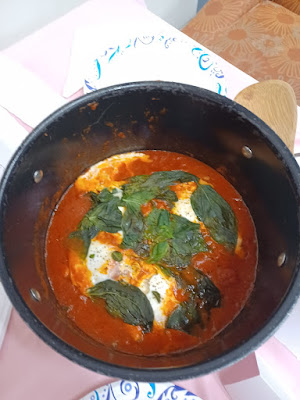 He shared his creation (photographed above) and described the other other egg-tomato offerings. Naturally I was inspired and made one dish for lunch the following day and the other for dinner. Cucina povera from around the world! All I had to go on were his text-brief descriptions of the food... 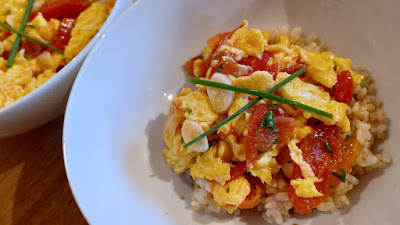 "The Chinese dish was diced tomatoes with scrambled eggs, chives, and soy sauce over rice." 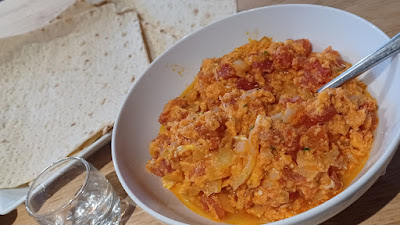 "The Assyrian dish was blended tomatoes and scrambled eggs that you ate in a lavash wrap."
I will share the bowl of comfort food I paired with the Cecchi Chianti Classico Riserva 2015. The earthiness of the wine had me thinking of mushrooms. I made polenta topped with roasted salmon and a mushroom ragù. I will post that recipe soon!
Uova in Purgatorio 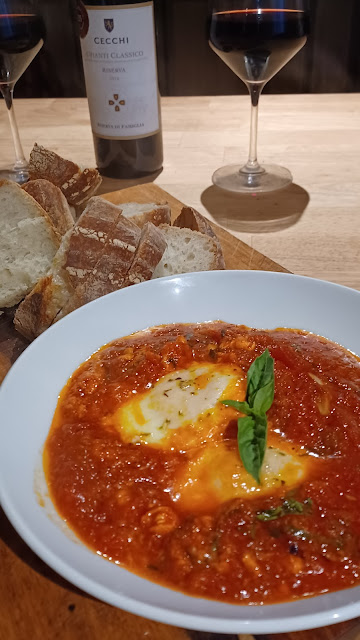 Ingredients serves 2
Procedure
Pour the olive oil into a heavy duty skillet and warm over medium heat. Add the garlic and heat until aromatic, but be careful not to let the garlic brown or it will get bitter. Pour in the tomato sauce and wine. Stir in the seasoning and red pepper flakes.
Bring the sauce to a simmer. Crack the eggs and let them slide into the juice. Partially cover with lid and let it simmer for 5 minutes. The white should be set, the yolk still runny.
Serve with bread and garnish with fresh basil.
That's a wrap for my post and offering for the November #ItalianFWT Cavalcade of Chianti. Thanks to Liz and Cecchi for organizing and sponsoring, respectively. The group will be back in December to share pairings of Italian wine and cheese with Deanna of Asian Test Kitchen hosting. Stay tuned for more information. 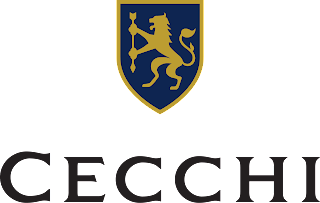 Find Cecchi on the web, on Facebook, on Instagram, on Twitter
*Disclosure: I received compensation in the form of wine samples for recipe development and generating social media traction. My opinions do not necessarily reflect the opinions of the organizer and sponsors of this event.