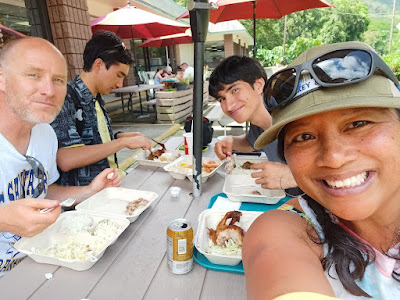 If you follow my blog regularly, or my social media, you'll know that we spent some time on the Hawaiian island of Oahu this summer - for our first family vacation since 2018. And you would also know that I like to read books that take place wherever I happen to be vacationing. I shared that I read all fifteen books of A Murder on Maui series in my post Fifteen Books of Poe and a Shave Ice Addiction; I had read the first four while we were on the island and on the plane ride home. On the plane ride there, I read the four books in J.E. Trent's Hawaii Adventure series.
Jessica Kealoha, a detective with the Los Angeles Police Department, hails from Hawaii where her father's side of the family is in law enforcement and her mother's side is in the Japanese Yakuza (organized crime). After her father dies under mysterious circumstances, Jessica returns to the Big Island to support one sister who has just been diagnosed with breast cancer and another sister who manages the family resort, Aloha Village.
This is not great literature, but the story and characters were interesting enough to hold my attention through four books. And I, apparently, can't get enough of books set in the Hawaiian Islands! I am working my way through a third series right now called the Maile Spencer Honolulu Tour Guide Mysteries. More on that later!
Plate Lunch 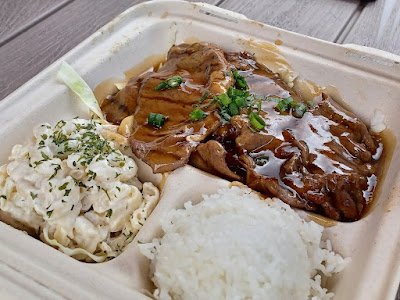 There is some island fare mentioned in this series! In the first book Death in Paradise: "That was the thing about being back in Hawaii—potato mac and two scoops of rice always came with the plate lunch, and a zillion carbs to boot. Until her thirties, she could eat anything and not gain an ounce. After forty, just looking at a chocolate cake seemed to equal gaining five pounds. The last couple of weeks since her father’s death, she’d been hitting the chocolate cake hard. Coffee, booze, cigarettes, and donuts used to be Jessica’s four major food groups; now she was just down to sugar. It was a reasonable compromise in her mind. Besides, unlike booze, nobody ever got arrested for eating cake" (pg. 123).
Banana pancakes and regular luau fare also make a cameo. Because we lunched out and about wherever our adventures took us, we indulged in quite a few plate lunches. Those double carbs - rice and potato mac salad - always make me laugh.
My Hapa-Haoles 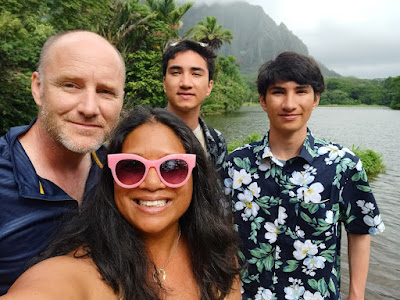 But it was in Book Two, Death Orchid, that I was inspired by Jessica's suggestion of barbeque chicken plates...and this racial explanation: "Hapa (Ha-Pa) Means mixed race. Hawaiian, Chinese, Japanese, Portuguese and Filipino make up the majority of the population in Hawaii and when they marry their children are called hapa. A mixture" (pg. 179).
Unlike haole (white) which is almost always pejorative, hapa or even hapa-haole doesn't seem to be. In fact, in my household, we often call my husband a haole...and my kids hapa! Though they get their height from Jake, they have enough pigment that they are clearly part me, too. We were only on the island for two days when R looked at me - and my skin that despite 50 SPF sunscreen had darkened considerably - and commented, "Mom, you look 100% island!" It's probably why I got a few "Howzit, Sistah?" when I was far enough away from all of them. Ha.
Huli Huli Chicken 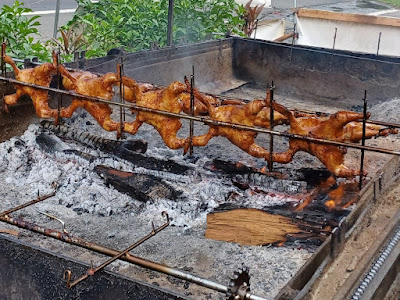 L & L Barbeque seems to be Jessica's favorite take-out for dinner; it's mentioned a few times in every novel. But it was our roadside lunch of huli huli chicken that has me dreaming about replicating this process. It's delicious. 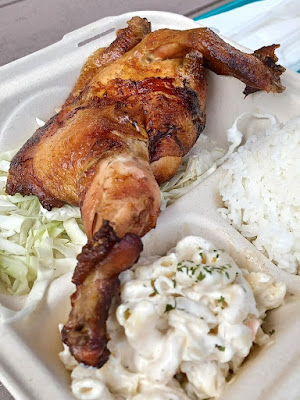 Jake was curious enough to ask the guy manning the grill what kind of wood he was using. Unfortunately, we can't get the wood on the mainland, but I can make this sauce!

Combine all of the ingredients into a medium saucepan. Bring to a boil. Then, reduce heat to medium and simmer until thickened and syrupy, approximately 20 to 25 minutes. You will end up with about 1 cup of huli huli chicken sauce.

What about you...have you been to Hawaii and had huli huli chicken?
I haven't been very good about linking up to our #FoodieReads group.
Here you go: the August #FoodieReads.