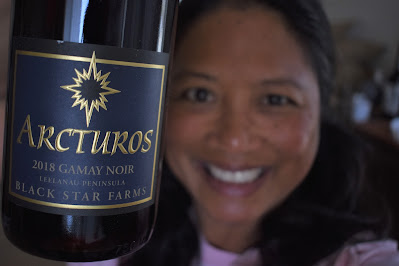 This month, the Wine Pairing Weekend bloggers are looking at wines from the Mid-West. Jill of L'Occasion is hosting. Read her invitation here.
If you are reading this early enough, feel free to jump in on our Twitter chat. We'll be live on Saturday, July 10th at 8am Pacific. Just follow the hashtag #WinePW and be sure to add that to anything you tweet so we can see it.
Here's the line-up of articles from the Wine Pairing Weekend writers about the Mid-West wine region...
The Mid-West 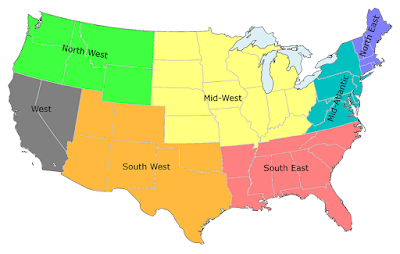 I'll start with this admission: When I first saw the theme, I was looking for wines from the wrong states. Seriously. My United States geography is abysmal; I have visited more countries around the world than states in my own country. And in the thirteen months I lived in Oklahoma, I called it the Mid-West. No wonder people just shook their heads at me and whispered 'California girl' under their breaths.
I went looking at maps and realized there isn't a solid consensus about the Mid-Western states. I found some that listed eleven states, some as many as thirteen. Some sources include Kentucky, others have that part of the South East. Even armed with a set of states to search for wines, I came up empty.
A Generous Foodie Friend 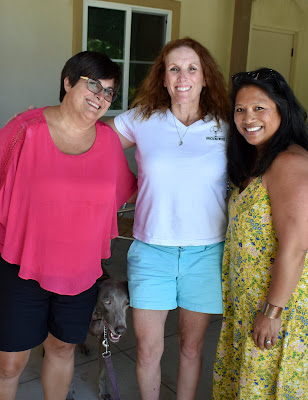 (l to r) Wendy, Lori, and Cam. Paso Robles, August 2019
The food blogging community is one that reaches across state lines...and even country lines. Some of my favorite wine blogging friends live in Turkey and France, respectively; Andrea blogs at The Quirky Cork while Lynn jumps in from France and her blog Savor the Harvest. Both ladies add a beautiful international perspective to our events.
Through posts, virtual chats, and social media, you can get to know people all over the place. And, in rare instances, the blogging world and real life collide. I have been lucky enough to meet up with Wendy of A Day in the Life on the Farm during three of her trips out to the central coast of California. That photo above was from our wine tasting meet-up with Lori of Dracaena Wines and the blog Exploring the Wine Glass. That was the summer before COVID and I'm not sure when we'll have a chance to share a table again. Hopefully soon! 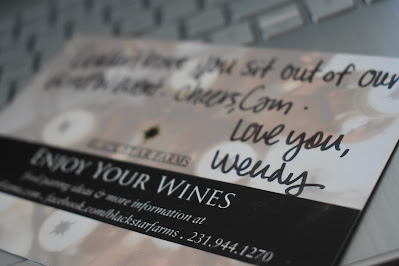 In any case, when I struck out on sourcing a wine from the Mid-West, Wendy - true to her generous nature - ordered three bottles of Michigan wine for me and had them shipped to California. Wow! I am pretty sure that I squealed in delight when that box showed up on my doorstep.
Black Star Farms 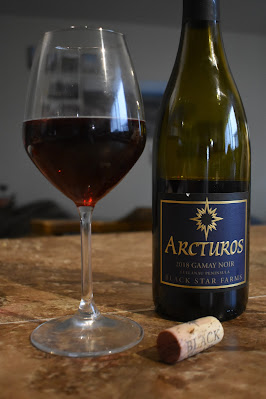 So, thanks to a generous foodie friend, I am able to participate in the #WinePW Mid-Western wines event. Wendy sent me three bottles of wine from Black Star Farms which is located on the Leelanau Peninsula, in the heart of Northern Michigan Wine Country. In addition to their winery and distillery, it's an extensive estate - 160 acres! - with an inn, an onsite community-supported agriculture (CSA) garden, a creamery that makes raclette cheese, a tasting room, and petting farm. It sounds heavenly and I can see why Wendy and Frank have stayed there several times.
Wendy shipped me the 2018 Arcturos Gamay Noir, 2020 Arcturos Sur Lie Chardonnay, and the 2019 Arcturos Pinot Gris. 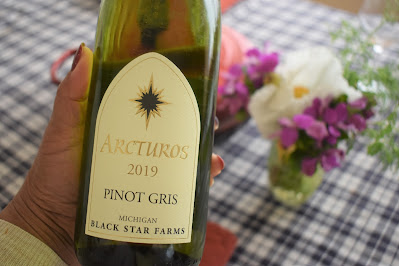 I poured the Pinot Gris with a Moroccan Rice dish for my parents' forty-ninth anniversary dinner. 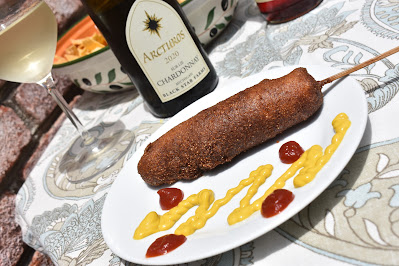 And I paired the Sur Lie Chardonnay with two different meals - hand-dipped corndogs on the 4th of July and Japanese-style fried chicken - and will share tasting notes and recipes for those soon. But for this post, I had asked Wendy to share some traditional recipes from Michigan and she told me 'pasties' and shared this post. I decided to make my version and pair the Gamay Noir. 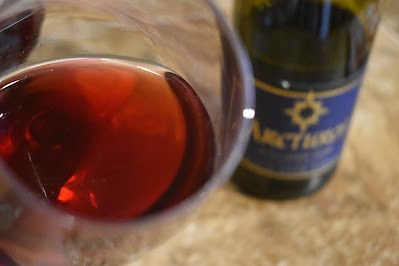 In March of this year, with the French Winophiles group, I looked at three different Gamay Noir wines. You can read my post Gamay Around the Globe: From Burgundy to the Willamette Valley + Mussels, Pici, and A Bottle from New Zealand. I am excited to add a Mid-Western wine to that line-up. This is Black Star Farms' second vintage of Gamay.

In the glass, this wine poured a beautiful light red, almost like one of my favorite Barolo wines. Just read. No purple or inky colors. Beautiful, bright red. On the nose there were lots of red fruit aromas. But on the palate, the wine was so much more nuanced. It had all the requisite red fruit that I think of with a Gamay, but then there was a roundness of oak with a subtle earthiness that I loved! 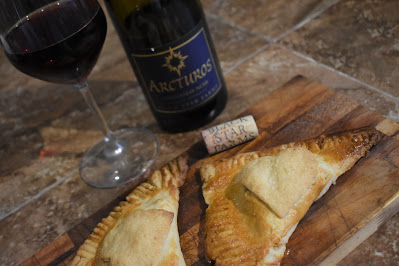 So, when I first saw Wendy's response about a pasty, I nearly spit the coffee I was drinking out through my nose. What?!? Because outside the rural Mid-West, that word refers to something you might find at a strip club. Think decorative - not functional - nipple covers rather than a pastry crust filled with savory deliciousness.
More reading revealed that the pasty, which actually rhymes with 'nasty' versus 'tasty', has roots with laborers from Cornwall, England. Immigrant Cornish miners made these portable meat pies to take into the copper mines during their twelve-hour workdays. The next wave of Finnish miners took their cues from the Cornish and made adaptations to the pasty, swapping out rutabagas for carrots. And each subsequent immigrant group who embraced the pasty, made their own version of the dish. Still the beauty of the pasty is in its practicality and portability, not necessarily its flavors or ingredients. To that end, I used what I had and seasoned it simply with salt and pepper.
And somehow I skipped the part about serving these with either ketchup or gravy. We ate them as is. But I can see slathering these in a rich beef gravy. Next time!
Ingredients makes 6 to 8 small pasties 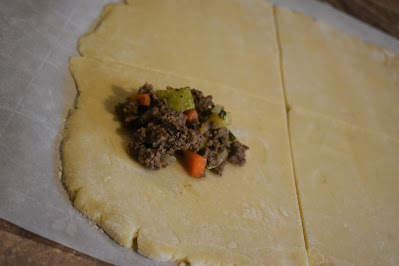 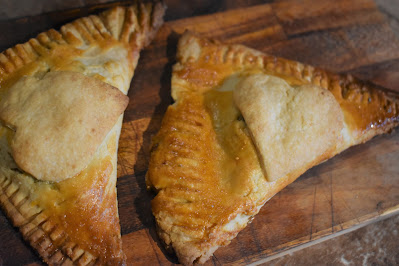 Crust
In a food processor, combine the flour and butter and pulse until the texture looks mealy. Sprinkle in your liquids and pulse until combined. Remove the dough and press into a ball. Wrap ball tightly with plastic. Refrigerate for at least an hour. 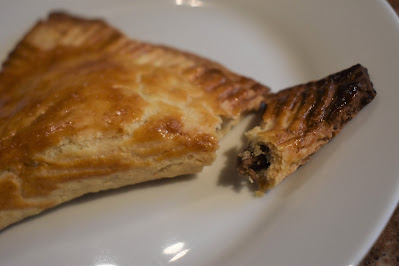 Filling
Heat olive oil in a large skillet. Add in the ground beef and cook until completely browned, breaking up the meat with a wooden spoon during cooking. Stir in the onions, carrots, celery, and potatoes. Pour in the beef stock and simmer until potatoes are fork tender, approximately 15 minutes. Turn up the heat and cook until the stock is completely absorbed. Season to taste with salt and pepper.
Assembly
Preheat oven to 375 degrees Fahrenheit. Remove the disk of dough from the refrigerator. Place the dough on a lightly floured piece of parchment paper. Sprinkle the top of the dough with flour and roll out to between 1/8" and 1/4" thick. I made a rectangle and cut it into 8 squares.

Spoon the meat mixture onto one half of the crust and fold the corners together to form a triangle. Crimp the edges with a fork and place on a parchment paper or silicone mat-lined baking sheet. Repeat until all of the squares are used; you will have leftover filling. Once you have everything assembled, brush the pasties with beaten egg and place in the preheated oven. Bake at 375 degrees Fahrenheit for 40 to 45 minutes. Check it after about 30 minutes and place a piece of tinfoil over them if the crust is getting too brown.

That's a wrap for the July #WinePW event about wines from the Mid-West. We'll be pouring and pairing wines aged in amphorae for August with Gwendolyn of Wine Predator leading the discussion. Stay tuned for more information on that.