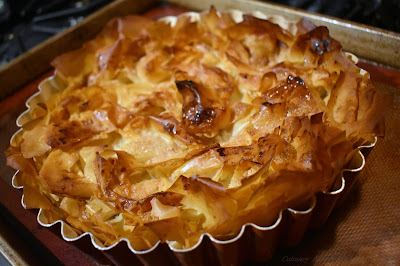 Happy Pi Day! Every year Coleen of The Redhead Baker invites her blogging pals to post pie recipes in honor of the day. And, in previous events, I've shared Lamb, Basmati Rice, and Grape Leaf Pi(e) and Matcha-Chocolate Pie. And I actually just did a round-up earlier this evening in my post Mathematics, LEGO, and a Pie Parade. But here's the pie rack for the 2019 edition of #PiDay with Coleen...

Tourtière Landaise
First, this dessert and this post, almost didn't happen. Almost. The first time I went to make it, I somehow managed to push the temperature to broil, instead of 325°F. Needless to say, by the time my husband mentioned the burning smell, it looked like this... 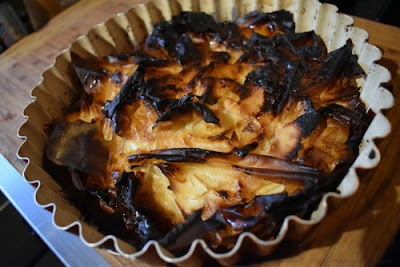 I almost cried. Second, in the package of phyllo dough that I had purchased for take two, the sheets weren't whole. They were cracked and tore in half as soon as I pulled them out of the wrapper. I might have rushed in defrosting them. But I decided that, since many of the sheets were crumpled anyway, I was running with it.

A note: traditionally the Tourtière Landaise is made with apples and armagnac which is a French brandy made with grapes. Similar to cognac, armagnac is a French brandy made with grapes. But unlike the former, armagnac is distilled once rather than twice; also it is aged in black oak barrels rather than white. I opted to go further away from traditional with a brandy made in Normandy. But this brandy - Calvados - is made out of apples. I figured that that spirit would actually be very complementary. It was! 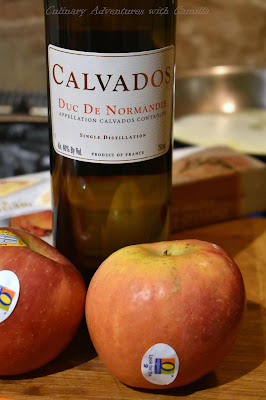 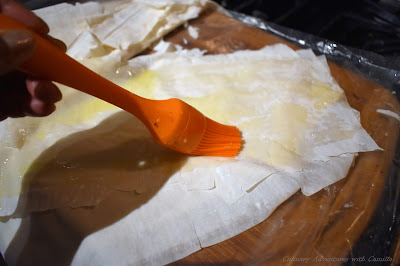 Procedure
In a small saucepan, melt the butter over low to medium heat. Keep an eye on it so that it doesn't brown or burn.

Preheat oven to 325°F. Remove melted butter from heat and pour in brandy and vanilla extract.
Grease your pan. Using a pastry brush, brush one sheet of phyllo with the butter-brandy mixture and place it in the bottom of the pan. Repeat with three more sheets so that the bottom has four layers over it. Sprinkle 1 T sugar over the bottom and place half of the apples in a thin layer over that. Sprinkle with another T of sugar. 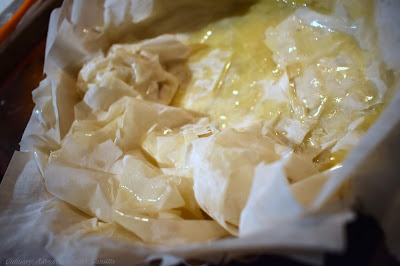 Brush 7 more sheets of phyllo dough and crumple them into a ball at the bottom of the dish, creating a crumpled layer. Sprinkle with 1 T sugar and place the remaining apples in a layer over that and sprinkle with another T sugar.  Brush the rest of the sheets and create another crumple layer. Sprinkle 1 T sugar over the top and gently fold any edges in towards the center. 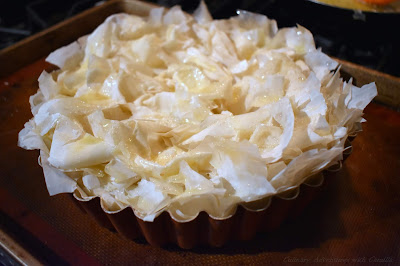 Drizzle the pie with any remaining butter-Calvados mixture, then sprinkle the phyllo with the remaining sugar. Bake until the phyllo is golden brown and the apples are tender, approximately 40 to 45 minutes. 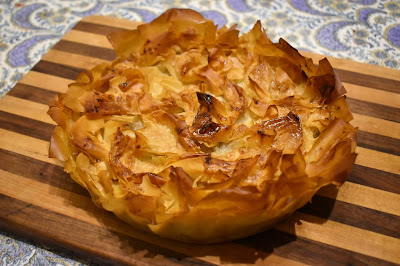 Transfer the pie to a wire rack and let cool for 10 minutes before unmolding the pie. Serve hot, dusted with powdered sugar. 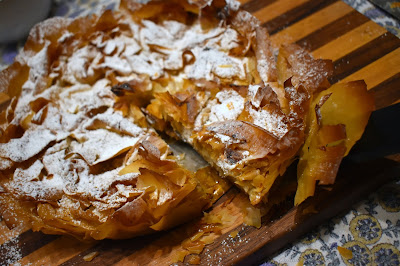 I can't believe I've never had this pie. It's flaky, airy, and so, so delicious. I can't wait to make it again. Soon. 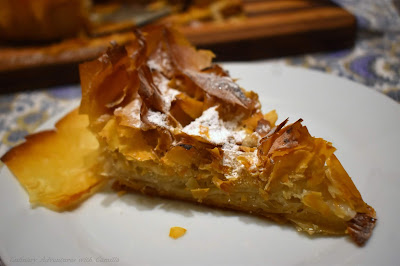