Beef Rendang with Potatoes and Cauliflower

I very rarely eat meat twice in a day. But even though we had Bò Nướng Hành Hương (Vietnamese Beef-Onion Roll) for lunch, Sundays are a great day for me to do a slow-cooked stew for dinner. So we had beef twice yesterday. There were no complaints from the boys and the littlest one even asked for a second helping. 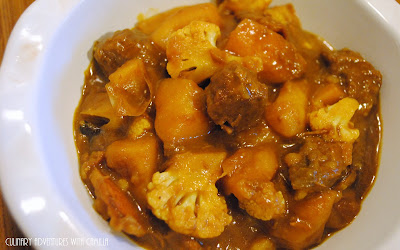 Beef rendang is of Indonesian origin, from the Minangkabau ethnic group of Indonesia and is often served at ceremonial occasions and to special guests. But beware, beef rendang is not your everyday beef dish that you can whip up in a jiffy; it takes a good four hours of cooking, not including all the chopping and prep. Plus, I think that letting it sit overnight actually helped develop the flavors.


No beef rendang is made exactly the same, so I didn't feel too badly about taking some culinary liberties with the dish. I added in potatoes and cauliflower with this version


Procedure
Melt butter in a splash of olive oil in a soup pot or Dutch oven. Add onions, garlic, ginger, and turmeric. Cook until softened and aromatic, approximately 5 minutes. Add the beef and stir for 2 to 3 minutes until the beef is lightly browned on all sides.

Pour in the maple syrup, coconut milk, water, vinegar, fish sauce, and soy sauce. Whisk in the tamarind paste until smooth. Add in the spices - cinnamon, star anise, and cardamom pods. Bring to a boil, cover, and reduce heat. Simmer for 2 to 2-1/2 hours, until the meat is tender.

Serve hot over brown rice.
Posted by Camilla M. Mann at 10:39 AM