On our way off the mountain earlier in the week, I noticed a sign near the California-Nevada stateline. It read: "40 Craft Beers on Draft." Ummm...heck yeah.

So, when timing worked out after another day near the summit of Mt. Rose, we stopped at the sign. 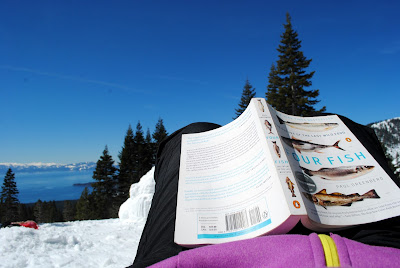 I actually had no idea what the name of the business actually was. Turns out it's the Mellow Fellow at King's Beach. The boys objected strenuously as we pulled into the parking lot. "Mom," they whined, "we can't drink beer. Do we have to stop here?"

Yes, look at the line below '40 Craft Beers.' Sausages! 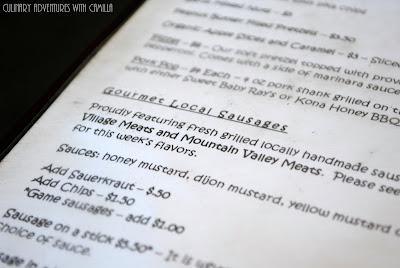 Along with the ridiculous variety (read number-that-sets my-little beer-loving-heart-aflutter) of beers on tap, they also had local sausages. Game sausages. I was bummed that the last elk sausage was taken by the customer before us. But we were still able to get venison and pheasant sausages from Village Meats and Mountain Valley Meats. The boys' take on the sausages: they were yummy, but they were too small. Agreed. 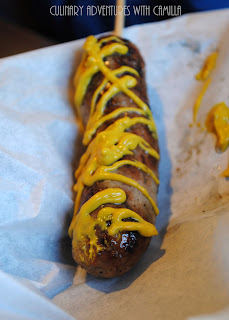 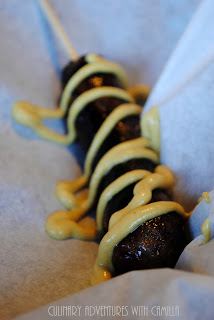 The chalkboard of beers was organized well. They were divided into categories - dark and malty, light, hoppy, Belgian and sour, and ciders. Each beer had the ABV next to it, but not the IBU. Still, it was pretty easy to determine where we needed to be looking for the beers that we wanted. 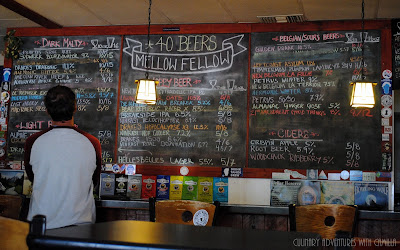 Typcially they only do tasting flights on Wednesday. Otherwise, they pour 10 ounces and 16 ounces. She went ahead and poured a flight for us on a Thursday! We picked four 5 ounce pours. 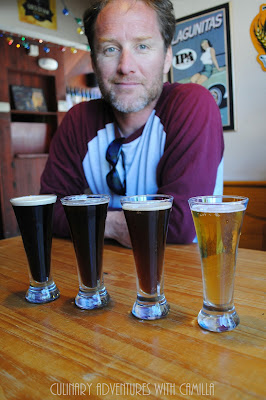 Jake selected two beers from the dark and malty category. And though he let me have a sip of each, that was all I got from him. He had Modern Times' Black House, an oatmeal coffee stout. Modern Times actually roasts their own coffee beans for the brew. Like fresh-brewed coffee, the result is an abundantly aromatic beer that's complex and creamy.

The second beer he picked was The Lost Abbey's Agave Maria, a barrel-aged strong ale. Aged for a minimum of ten months - in tequila barrels - Agave Maria has hints of pepper, oatmeal, and honey with a smoky oak and chocolate on the finish. 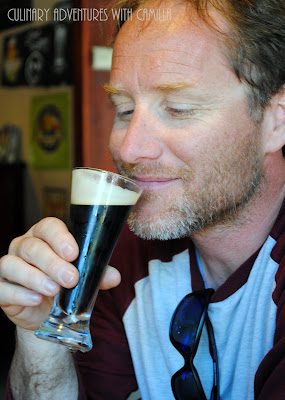 I chose two beers from the Belgian and Sour category. First, I had New Belgium's La Folie, a wood-aged sour brown. It spends one to three years in oak barrel. It pours a beautiful mahogany. And it's delightful - full of sweet-tart fruits with a woody weight.

Second, I had Almanac's Ginger Gose which is a seasonal riff on their Golden Gate Gose. They took their tart, Leipzig-style recipe of pale malt, wheat, coriander, and SF Bay sea salt and took it up a notch with spicy ginger. The result is a refreshing beer rife with earthy and spicy flavor. I loved it. 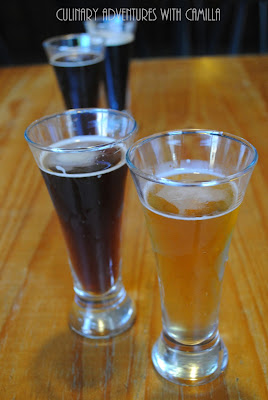 When I titled this "local flavor", I am not just referring to the local sausages. You could tell that Mellow Fellow is a local hangout. From the regulars to the dogs, everyone in there was comfortable and at-home. If we didn't have the boys with us, I would have lingered longer and explored the game room. A rustic, giant Jenga game caught my eye while I'm sure Jake would have loved to have whooped me at the foosball table. Another time...
Posted by Camilla M. Mann at 6:40 AM