By Camilla M. Mann December 30, 2010
Do you have any New Year's Eve dining traditions meant to bring good luck in the coming year? Two things I adopted from my time in Italy: clementines, though I don't usually take the time to wrap them individually in red cellophane, and lentils.

In the interest of fleshing out an entire New Year's Eve menu for tomorrow night, I did some research and found many, many different traditions from all around the world but the reasoning behind their lucky foods are oddly similar. Here are some of the overlapping auspiscious attributes: food that’s round (the shape of coins), food that's yellow or orange (the color of gold), food that's green (the color of spring leaves and paper money), fish (symbol of bounty), pork (prosperity and an animal that roots forward), legumes (coin-like seeds that expand like wealth) and cakes (sweetness is richness).

One tradition I found in Epicurious that I really like: "revelers in Spain consume twelve grapes 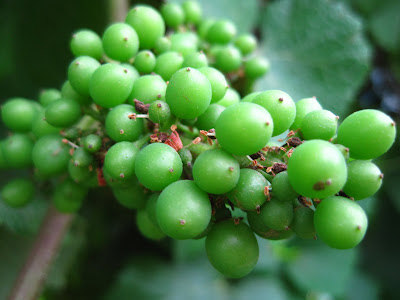 at midnight—one grape for each stroke of the clock. This dates back to 1909, when grape growers in the Alicante region of Spain initiated the practice to take care of a grape surplus. The idea stuck, spreading to Portugal as well as former Spanish and Portuguese colonies such as Venezuela, Cuba, Mexico, Ecuador, and Peru."

I gladly added grapes to my shopping list today! As for the rest of my menu, stay tuned.