The Evolution of an Easter Menu

By Camilla M. Mann March 22, 2016
We always have an Easter meal with my parents...and D and I have fun with the Easter table decorations as well as the menu. 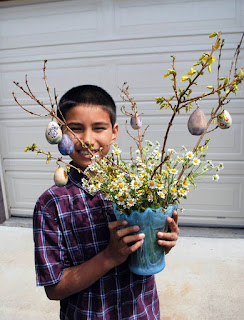 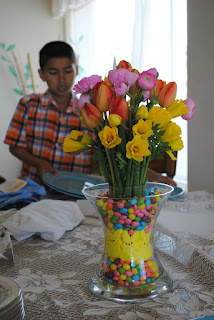 Here's how the conversation began this year...

C: Mom, we aren't going to be in town for our annual Easter Brunch.
S: Oh, that's okay.

[Less than 3 minutes elapse and my phone rings]

S: I was wondering if you could help me come up with a menu for Easter Brunch. Your dad and I are thinking that - since you guys are out of town - we'll have some friends over instead.
C: Sure, I could create a menu for you.
S: When do you leave? Do you think you could make the dishes ahead of time?
C: So, I'm not just creating a menu, I'm doing the whole thing...before we leave?
S: Can you?

[After the first menu draft was created and emailed to Nonna]

S: I had to look up some of those things on the internet.
C: What things?
S: Crudités.

[After the second menu draft was created and emailed to Nonna...who showed it to the Enthusiastic Kitchen Elf for approval]

S: D said that you got his drink pairings wrong.
C: Which one?
D: I said cucumber-beet, not cucumber-apple. And you didn't have my watermelon one. You got the basil lemonade right though.


S: Okay.
D: Approved!
C: Great. Done. Well, not done-done. I still have to go shopping and make everything.

I hope Nonna and Nonno's friends enjoy it all. Now I just need to figure out what we're having for Easter...on the road.