Charred Grapes on a Cloud for #FoodNFlix 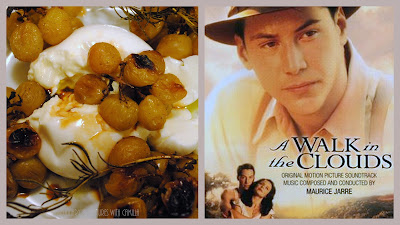 Wendy, of A Day in the Life on the Farm, is hosting our March Food'N'Flix event. We're watching, or rewatching as the case may be, A Walk in the Clouds.* Click to see Wendy's invitation. You still have plenty of time to join in the fun.

On the Screen...
It's been awhile since I've watched this movie. But I own the DVD, so, one night after the boys were all asleep, I popped it in.


Set, mostly, in a Napa Vineyard called Las Nubes - 'the Clouds' in Spanish - A Walk in the Clouds is a fiery romance, rife with passion and longing. Directed by Alfonso Arau, this film reminds me of the unabashed romance in another of his movies, Like Water for Chocolate. Both have a mystical element of true love that cannot be fettered by things such as marriages of convenience.

The movie opens with Paul Sutton - played by Keanu Reeves - returning home from the war to a wife he doesn't really know. "Let me guess," says his friend as they disembark the ship, "Met her on Friday, married her on Sunday, shipped out on Monday?" Pretty much, admits Paul.

He leaves San Francisco with a suitcase full of chocolates to appease his wife since she secured the job for his return and negotiated a raise. But on the first leg of his trip, he meets Victoria Aragon - played by Aitana Sanchez-Gijon.

Victoria had an affair with one of her professors at Berkeley, is pregnant, and has been abandoned by the professor, a free-spirit, who tells her he "was not meant for the conventions of this world." She dreads going home and admitting what has happened. Paul suggests he could pretend to be her husband, stay one night, then leave in the morning. Victoria agrees.

The movie progresses. And through a series of melodramatic crises, Paul and Victoria actually fall in love. He delays his departure - and their original plan - to help bring in the grapes. Here's a clip of the grape stomp...


Paul shares that he was an orphan: "When I was a kid, I made a wish on every star in the sky to have what you have here." Victoria quips, "And have everyone telling you what to do?" He says, wistfully, "Better than no one."

That is the blessing, and the curse, of a large family. At one point, when Don Pedro has embraced Paul as part of the family, he decrees, "You are an orphan no longer."

I love this movie. It's sappy. It's romantic. But, it's magical and one I can watch it over and over again. 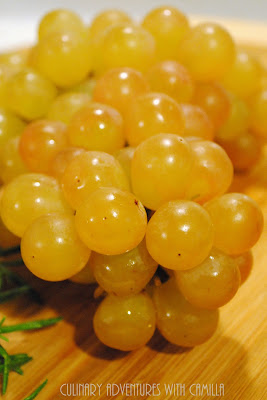 On the Plate...
I toyed with the pumpkin flower soup from the first dinner when Paul meets Victoria's family. But I couldn't find any pumpkin flowers at the farmers' market. Inspired by the fire in the vineyards, I decided to char some grapes. And, in honor of Las Nubes, the Aragon property aptly named "The Clouds," I served them with a mound of burrata.

Charred Grapes on a Cloud 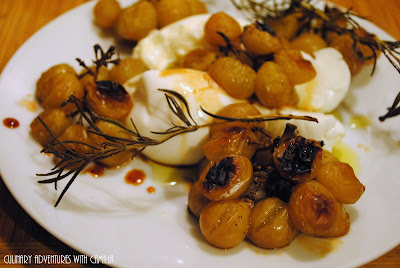 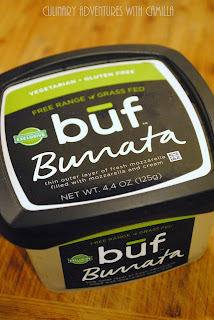 Procedure
Preheat oven to 425 degrees F. Place grapes in a rimmed baking dish. Drizzle with olive oil and sprinkle with salt and pepper. Lay rosemary in the pan. 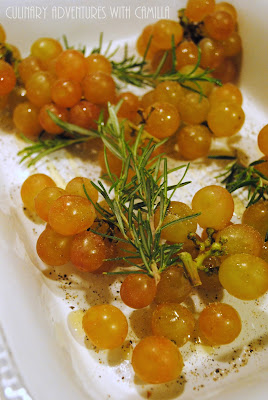 Roast until grapes have burst and some have charred approximately 30 minutes. Let cool slightly before handling. 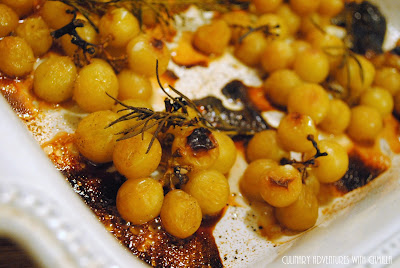 To serve, lay a burrata on  serving plate. 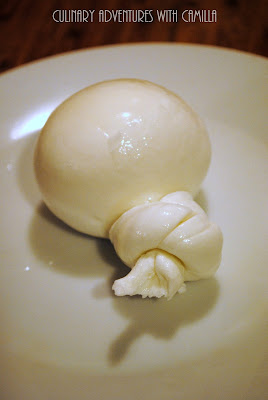 Slice it in half lengthwise. Drizzle with olive oil and balsamic vinegar. 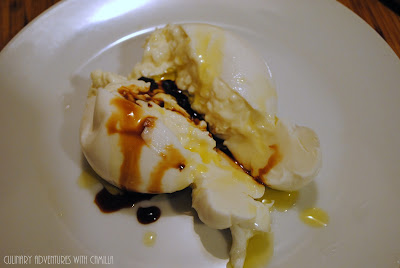 Lay charred grapes on and around the burrata. Sprinkle with salt and pepper. Serve immediately. 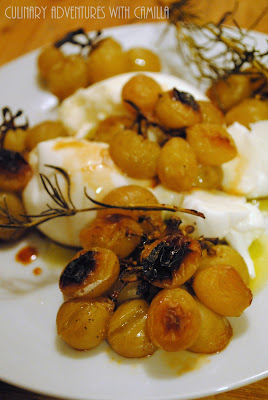