Tales from the Culinary Underbelly #FoodieReads 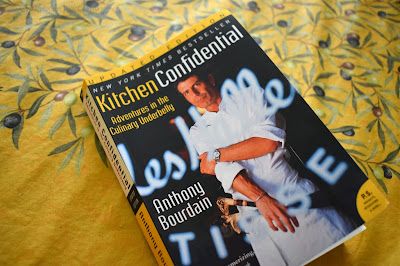 Almost a month ago, every social media channel I had was lighting up with news of Anthony Bourdain's suicide. Chef friends near and far posted memories of when they met him or recipes they had served him in their restaurants. Friends who simply enjoyed his books and television shows shared links of news stories from all around the world. 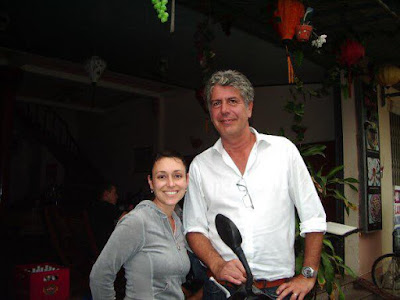 My friend Alla posted this photo and caption: "His appreciation for unusual foods shaped me into the foodie I am today and his ability to connect with people through food made me a huge fan. I had the incredible luck of bumping into him while exploring Vietnam and I probably didn’t stop smiling for days. The news of his death has made me incredibly sad today."

As for me, I went home and pulled my copy of Kitchen Confidential* off the bookshelf and dug into it with a glass of wine in my hand, lamenting that the world had lost Bourdain's voice, a voice of beautifully expressed, articulate contradictions. He managed to be irreverent and respectful at the same time; he was crass yet eloquent. I loved his candor and his introspection.

He recounted his awakening to food as currency, "I'd learned something. Viscerally, instinctively, spiritually - even in some small, precursive way, sexually - and there was no turning back. The genie was out of the bottle. My life as a cook, and as a chef, had begun. Food had power. It could inspire, astonish, shock, excite, delight and impress. It had the power to please me...and others. This was valuable information" (pg. 17).

He breaks down the three subgroups of line cooks - artists, exiles, and mercenaries. The latter are "people who do it for cash and do it well. Cooks who, though they have little love or natural proclivity for cuisine, do it at a high level because they are paid well to do it - and because they are professionals. Cooking is a craft, I like to think, and a good cook is a craftsman - not an artist" (pg.62). And, about hiring kitchen staff, he says, "When a job applicant starts telling me how Pacific Rim cuisine turns him on and inspires him, I see trouble coming. Send me another Mexican dishwasher anytime. I can teach him how to cook. I can't teach character. Show up at work on time for six months in a row and we'll talk about red curry paste and lemongrass. Until then, I have four words for you: 'Shut the fuck up'" (pg. 63).

But, I think, that the chapter in this book that gets it mentioned perennially is his advice to consider if you want to be a chef. He urges, very pragmatically: Be fully committed; learn Spanish!; don't steal; always be one time; never make excuses or blame others; never all in sick; lazy, sloppy and slow are bad; be prepared to witness every variety of human folly and injustice; assume the worst; try not to lie; avoid restaurants where the owner's name is over the door; think about that resume; read!; and have a sense of humor about things" (pp. 289-294).

I haven't worked in a restaurant or a commercial kitchen for over twenty years; in fact, the last time I was a waitress, I had just met Jake and I quit the same day I started because not a single customer came in that evening. Tips on zero receipts is a big fat zero. I couldn't pay bills on that.

So, though it had been a long time since I'd been in the culinary world, I appreciate the look Bourdain gives us behind the curtains - in the culinary underbelly. I was struck with the level of testosterone-driven debauchery and near-criminality he details. It’s reminded me of why Jake didn't allow me to meet him at certain construction sites.

This book marked the end of his life as a chef and the beginning of his television shows. In the afterword that he wrote from Bali six years after the book was originally published, he admits how times have changed. "While the world of cooking has changed, much remains the same. The basic character of the chef and cook hasn't wandered too far from the same recognizable personality types found in Orwell, Freleng or Bemelams: Senusalist, often socially inept outside the kitchen, frequently dyslexic - people with appetites that go beyond food. The kitchen remains a refuge for the fugitive, the obsessed, the border jumper and the borderline, people who are only truly confident beind a stove or standing at the pass. ...There are encouraging signs always: a sudden passion for pork belly, a revival of interest in offal, a willingness that didn't exist before to eat oily little fish and stinkier, runnier cheese. And there are also discouraging developments: successful campaigns against foie gras, more restrictive health and safety requirement which strangle artisanal producers who've been continuing with traditions unmolested for centuries" (pg. 306).

Bourdain was a gifted storyteller who wasn't afraid to tell the truth and who, above all, respects the people behind the food. The world is worse off without him in it, but better for having had him...and all the people whose eyes he opened with his stories.