Almost a year and a half ago, I read an article in Edible Monterey Bay that mentioned the Pig Wizard; it was in a piece entitled Edible Artisans: Charcuterie. But, by the time I got around to trying to track him down, he had packed  up and taken off on some global adventure. He's back...and when I saw that he was going to be peddling his wares today - thank goodness for social media! - I sent my husband a text: "Go to ACME, between 10 and 12, and pick up some Pig Wizard sausages, please." I received two letters that made me grin from ear to ear. O.K.

And when I got home, a packet of Sicilian sausages were completely defrosted and ready to cook. Wow. Thanks, Love! 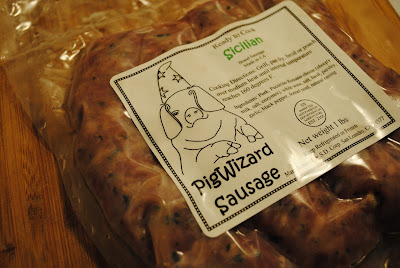 I really wanted to taste the Pig Wizard's sausage-magic, so I prepared them simply: browned and braised in beer. 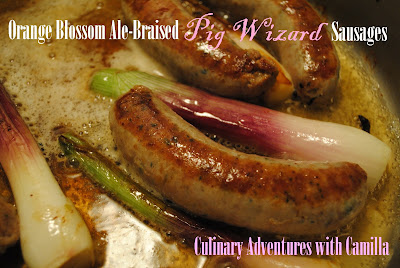 Brown sausages in a splash of olive oil until they have a nice color on both sides. Add halved red Spring onions to the pan and pour in half a bottle of beer. I used Buffalo Bill's Orange Blossom Ale. Simmer until all of the liquid is absorbed. Continue cooking - and browning - until the sausages are firm to the touch. Serve hot.