Cooking Around the World: (Faux) Mfumbwa and Ginger Lemonade {Mali} 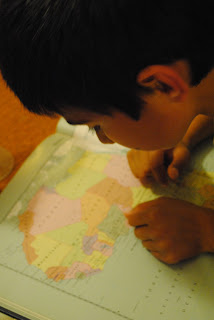 It's hard to believe it's been almost a month since we last traveled by tabletop, but I have to admit that much of the African cuisine we've cooked is not a family favorite. So, I've been dragging my heels on the next country on this list: Mali.

Mush, mush, and more mush with peanut sauce. I know that's an over-simplification, but African countries do seem to eat a lot of food with a very soft consistency. This dinner was no exception.

Mali is a beautiful but poor country in West Africa with an incredibly rich history. The Niger River runs deep into Mali's Sahara desert. Even today boats ply their trade up and down the Niger, but the flourishing ancient empires were responsible for building legendary cities such as Timbuktu. Salt caravans still utilize their ancient routes.

Where in the World...Mali lies in Western Africa, southwest of Algeria and east of Mauritania. 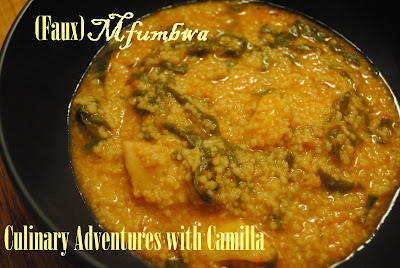 Mfumbwa refers to the leaves of Gnetum africanum, a plant found in tropical Africa that is commonly collected prepared in the same manner as cassava greens or spinach. So, ours is a faux Mfumbwa made with chard from our WE Cooperative CSA box provided by Fogline Farm. Also, the traditional soup uses catfish from the Niger. I used Pacific cod.

In a large souppot, saute the green garlic and ginger in a pat of butter and a splash of olive oil. Once the garlic is softened, add in the cherry tomatoes and simmer until they begin to pop open. Stir in the fish, skinned and cubed, followed by the chicken broth. Simmer the fish until opaque and firm. Add in the peanut butter and the chard. Simmer until the greens are nicely wilted. Add in the couscous, cover, and turn off the heat. To serve, ladle into individual bowls and top with a dollop of chili paste. 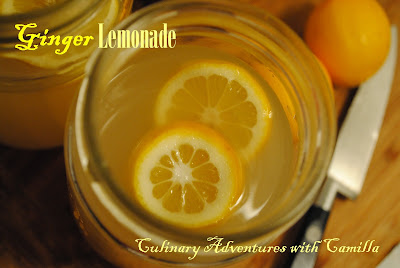 I served the Mfumbwa with jars of ginger lemonade. The secret to homemade lemonade is to make a simple syrup first. That way the sugar is dissolved and not grainy in your drink. The ratio for the syrup is 1: 1: 1.

That's 1 C organic granulated sugar, 1 C water, and 1 C freshly squeezed lemon juice for the base. Put the sugar, water, and 2 T of crushed ginger into a saucepan and simmer over medium heat till the sugar is completely dissolved. Pour into a mixing pitcher. Add 1 C freshly squeezed lemon juice. Then add water to taste, usually another 5-6 C of water. Let sit for at least 30 minutes before serving. Serve with slices of fresh lemon.

These Global Table Ambassadors are signing off for now. We're headed to Malta next...
Posted by Camilla M. Mann at 8:02 PM