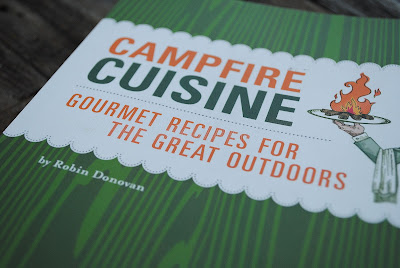 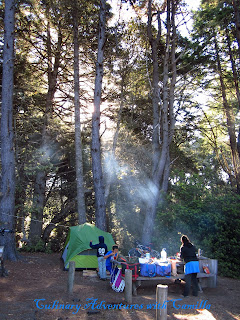 When Quirk Books was preparing to release a new edition of Robin Donovan's Campfire Cuisine: Gourmet Recipes for the Great Outdoors, they must have been clearing the old version from their coffers because I received a complimentary copy of the soon-be-replaced edition. I filed it away, among my cookbooks, waiting for our annual 10-day camping trip.

Not to toot my own horn, but I am a seasoned home-cook and a veteran camper. So, I just jumped right to the recipes and began making my grocery list without reading too much of the introductory material.

I have to admit that, at first glance, I balked at several recipes: San Francisco Cioppino and Barbequed Peking Duck Wraps out in the wild?! Please. And this isn't a book I would have picked up on my own even though I love cooking in the wild. While we don't eat freeze-dried camping food or even food from cans; I'm okay with miso soup from a pouch, peanut butter slathered on bread, and some nitrite-free hot dogs roasted over the fire. I have never felt the drive to be a gourmand while we're camping. That said, having cooked from Campfire Cuisine: Gourmet Recipes for the Great Outdoors during our travels this summer, I would definitely like a copy of the new edition for my portable kitchen! I have befriended cooking over the fire...as long as I have some heavy-duty aluminum foil on-hand. The only thing I need to remember for next year: pot holders and tongs! 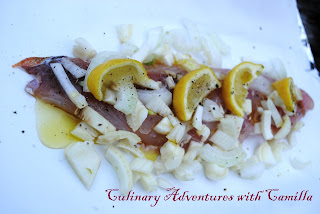 Over the course of 10 days, 1200+ miles, 1 national forest, 4 state parks, miles of hiking, and many more miles of biking, we tried - read 'were inspired by and adapted' -  Donovan's Veggie Polenta Scramble, Curried Chicken Salad, Spicy Peanut Sauce over Venison Kebabs, Grilled Zucchini, Compound Garlic Butter on Grilled Fish, and Fish with Fennel. In fact, I made her Potato-Fennel Packets at least three times! They were so easy and tasty.

But the recipe I'll share with you as 'lick-the-pan amazing' is her Maple Mustard Pork Chops. She suggests serving them with grilled sweet potatoes. I used the procedure from the Potato-Fennel Packets...just with sweet potatoes and also did some foil-roasted ears of corn. It was a delicious dinner that came together easily while the boys were setting up camp at Salt Point State Park. 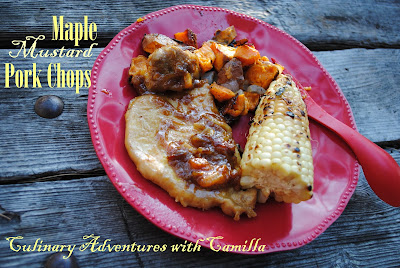 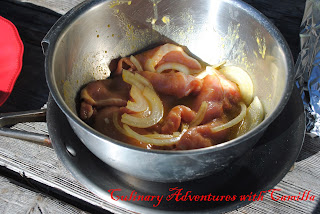 In a large mixing bowl, mix the mustard, vinegar, maple syrup, salt and pepper. Blend with a fork until well-combines. Add the pork and onions. Cover and let sit - on ice - while you start the fire. 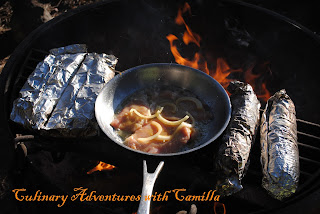 In a sauce pan, over the open fire - or on a camp stove, if you prefer - sear your pork chops quickly on both sides. Add in the marinade and a few onions. Cook for about 5 minutes per side. Remove your meat and keep covered with foil. Add the remaining onions and cook until translucent and caramelized.

Serve hot...with some iced brews for the tall people! 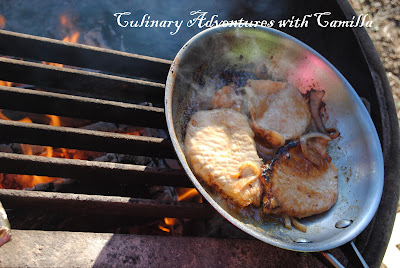 While it took me several days of cooking through her book before I sat down and read it, I was amused by her prose and inspired to try out more of her recipes. I'm oogling the Parmesan Baked Apples, Pan-Fried Bread with Pears, Bleu Cheese, and Maple Syrup, and Coconut Couscous.

We've packed away the tent for the summer, but will be taking one more camping trip before the year is through. You can bet that Campfire Cuisine: Gourmet Recipes for the Great Outdoors will be tucked in my cooking bin.