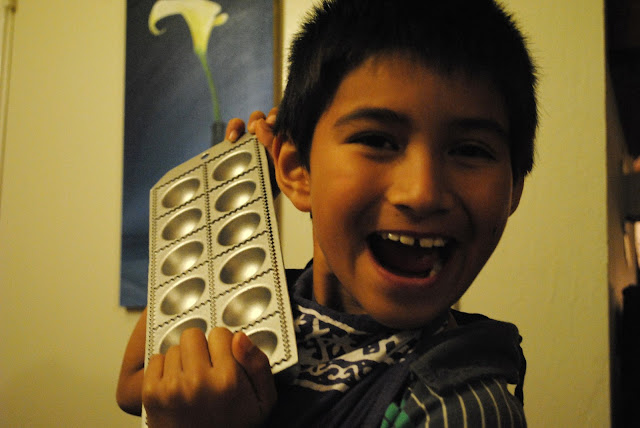 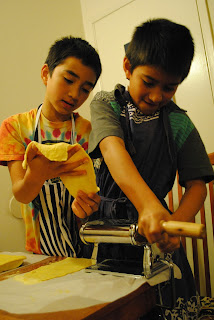 After our pasta-making adventure at Cucina Bambini during Fall Break last year, the boys asked for - and got! - a pasta machine. Then, for Christmas, they wanted a ravioli pan; and, one of my best friends got it for them. So, we took the ravioliera out of the box yesterday and attempted to make ravioli last night. I write "attempted" on purpose. We couldn't get the ravioli out of the tray. Ugh. Riley called our pasta "Frankenoli" because they were patched up with other bits of pasta dough, misshapen, and not pretty. So we made and ate a few Frankenoli. And Dylan whipped up a batch of fettucine to fill the plates. Delicious! 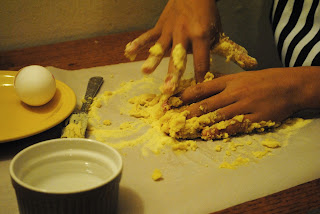 Place flour in the center of a mat, making a well in the center. Crack and egg into the well. Gently whisk the egg to blend the yolk and the whites. Begin sprinkling flour from the walls of the well into the egg while whisking. Work all of the flour into the egg until you have a ball of dough and no flour left on your mat. 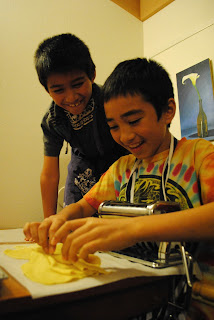 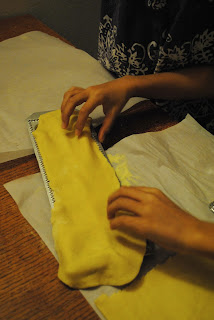 For ravioli: lay the pasta over your tray, fill the hollows, lay another pasta over the top and use the wooden roller to seal and cut. Gently remove the ravioli. Cook in boiling water until they float to the surface. 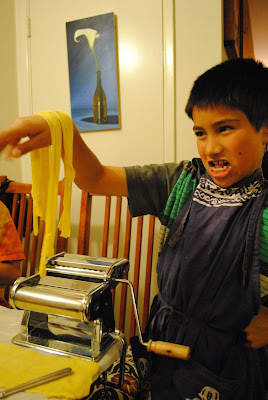 For fettucine: Use the noodle cutters to the width you want. Cook in boiling water until they float to the surface.

I promised them we'd attempt ravioli again next weekend. We will get this right eventually!
Posted by Camilla M. Mann at 12:39 PM